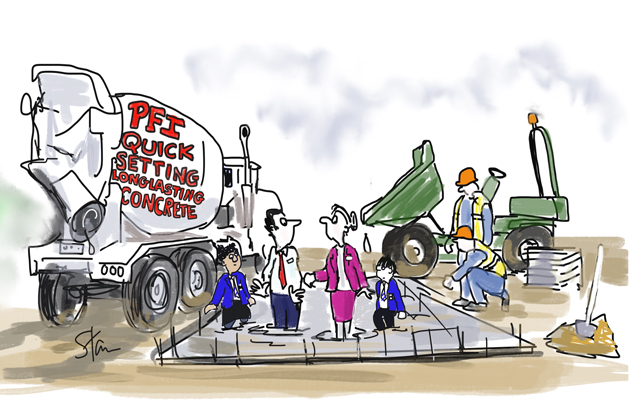 Special assemblies were held this term at Hylton Castle Primary School to celebrate the opening of their new school building. The Sunderland school was the first to open under George Osborne’s revamped PFI initiative – Private Finance 2 (PF2).

Forty-six schools will be rebuilt or refurbished using £700 million of PF2 funding as part of the government’s Priority School Building Programme.

But will these schools face the same future as those in PFI?

Not according to the Treasury. It says PF2 will address issues raised with PFIs.

Probably the biggest change is that soft facilities management services – such as waste management, catering, cleaning or security – have now been removed from the contracts. Control over the services, which have attracted criticism in the past because of their value for money, will instead be managed by the school or the local authority.

There is an option to include “minor maintenance” activities in the contracts – but the Treasury says these can be added or removed after the contract has started. Contracts will also include a clause for a periodic review allowing schools to ensure they have value for money.

Another change is that the Education Funding Agency (EFA) will be the procuring authority on the projects, rather than local authorities, although the EFA does not have a history of managing such contracts well.

Marcus Orlovsky of Bryanston Square consultants, who has worked on several PFI contracts, said local oversight of projects would be lost. “Trying to manage the contracts centrally, while at the same time trying to keep costs down, has the possibility that it will end up in the same state.”

The government will also become a minority equity holder in new projects. It says that this will deliver increased financial transparency for the public sector, but perhaps more importantly for schools, a stronger involvement in decision making.

It means the taxpayer should receive a proportion of any returns made on the contracts, but experts have concerns.

Part of the new deal means construction firms will be asked to put more of their own money into projects as equity. Mr Orlovsky says this will drive up the overall costs of projects.

Mark Hellowell, lecturer at the University of Edinburgh and author of a report on PF2 for the Centre for Health and the Public Interest, added: “Far from avoiding the ‘PFI mess’ ascribed to its predecessors, the government is taking a route that may lead to another.”