White paper: How autonomy could be a spanner in the works

Figures published today show the Department for Education (DfE) has missed its secondary teacher training target for a seventh year running. Jack Worth looks at what the three main political parties are proposing to solve it…

Despite the number of secondary trainees increasing again this year compared to last, the latest teacher training data shows that the numbers are not sufficient to meet the recruitment target, which has also increased.  With increasing pupil numbers, this continues to be a pressing challenge for secondary schools.

The recruitment situation has deteriorated further for perennial shortage subjects such as physics, maths, modern foreign languages and chemistry. In contrast, subjects that have had less difficulty recruiting in recent years, including biology and history, are generally overshooting their targets by more than last year. 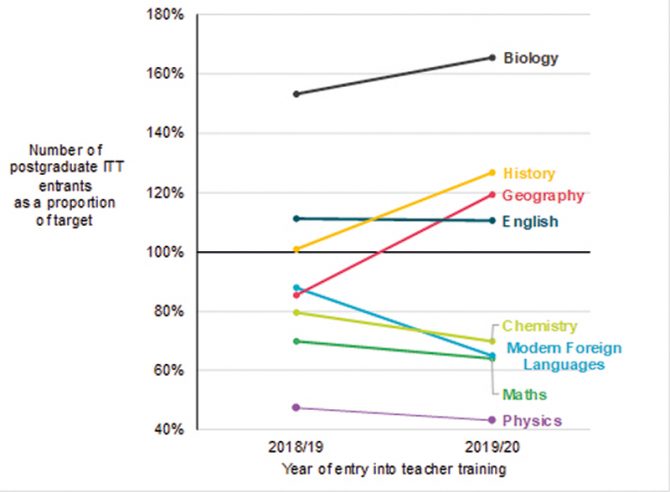 So what are the political parties planning to do about this?

Today’s statistics reinforce the need for the next government to continue to treat secondary school teacher supply as a top priority. Effective measures to increase the number of trainees are essential to meet growing demand, and increasing the retention of existing teachers would help to ease supply issues and make future recruitment targets easier to achieve.

In light of the urgency of the issue, what do the three main political parties’ manifestos offer on teacher recruitment and retention?

Increases in teachers’ pay feature strongly in each party’s proposals. After years of below-inflation pay rises up until 2018/19, increases in school spending and teacher pay are back on the political agenda.

There is good evidence that teacher recruitment is fairly responsive to pay. These plans therefore seem likely to increase recruitment to teacher training.

While there is a consensus among the parties that teachers’ pay needs to increase significantly, especially for new teachers, there is less consensus in the parties’ plans over how best to retain more teachers.

Increasing teacher pay is also likely to have some positive effect on retention. However, the research evidence (which we reviewed in a new report for the Royal Society published yesterday) suggests that the relationship between relative pay and retention is less strong than with recruitment.

The evidence also suggests that pay increases designed to improve teacher retention are likely to be best value for money when they are targeted at groups of teachers who are most responsive to pay differentials, such as early-career teachers and teachers of subjects with well-paid alternatives.

Teacher pay rises that are not differentiated by subject do not directly help to address the higher leaving rates among teachers in shortage subjects. Yet none of the party manifestos set out any plans for targeted approaches for addressing the under-recruitment and high leaving rates of shortage-subject teachers.

A key pillar of the DfE’s teacher recruitment and retention strategy was to support headteachers to reduce teachers’ workload. The policy has been to ‘simplify the system’ of accountability and school intervention and to ‘provide additional support to tackle challenging pupil behaviour’. It also committed to maintain a period of stability in curriculum, qualifications and assessment. The Conservative manifesto suggests that this stability is likely to continue.

In contrast, the Labour and Liberal Democrat manifestos propose radical reform to the accountability system, with a key aim to improve teacher retention. Labour declares that ‘intensified testing, inspection, league tables and competition… are contributing to a growing teacher recruitment and retention crisis’ and proposes to ‘end the ‘high stakes’ testing culture of schools’ and ‘replace Ofsted and transfer responsibility for inspections to a new body’.

Similarly, the Liberal Democrats are proposing to ‘replace Ofsted with a new HM Inspector of Schools’ that focuses on, among other things, ‘the wellbeing of staff’, as well as reducing ‘unnecessary stress on pupils and teachers … by scrapping SATs’.

It remains to be seen what the overall impact of substantial changes to the accountability system would mean for teacher workload and retention.

Whichever party takes office next month, they will have to include differentiated and targeted measures to address this issue within their overall strategy to ensure that the secondary school system has the right number of teachers in each subject to deliver a high-quality education for pupils.