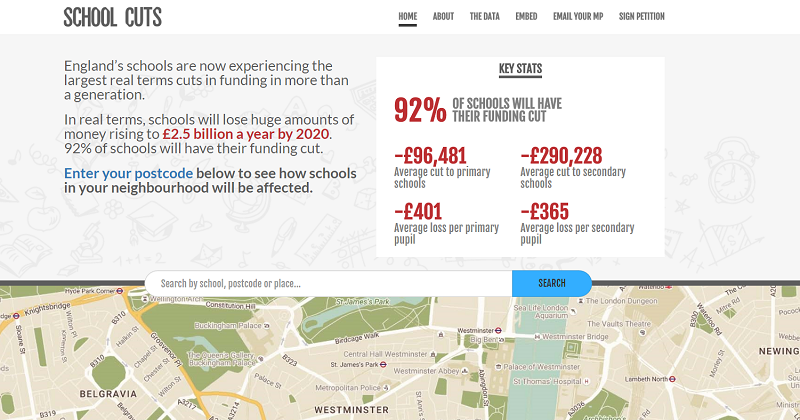 A new interactive website which purports to calculate the cuts faced by every school in England has been launched – with some parts of the country predicted to lose as much as 16 per cent of their funding.

The National Union of Teachers and the Association of Teachers and Lecturers have launched the School Cuts website – an online tool allowing users to search by school or postcode, and see predictions for the amount of money institutions will lose from their budgets by 2020. It also shows data for local authority areas.

A report released by the unions to coincide with the launch shows that schools in Justine Greening’s constituency will lose an average of 12.8 per cent of their funding, or £740 per pupil.

We are one of the richest countries in the world. We can and we should be funding our schools properly

Other areas badly affected include the London boroughs of Southwark, Lambeth, Hackney and Haringey, which are each expected to lose 16 per cent on average.

The website also shows that of the 20 worst hit local authorities, 15 are Labour controlled, four are independent or have no overall control and just one is run by the Conservatives.

But the Department for Education has hit back and said the site is “irresponsible scaremongering, based on figures that are entirely speculative.”

The unions’ website claims to calculate the impact of several government spending policies on existing budgets.

Researchers have worked out the impact of an 8 per cent real terms budget cut predicted by the Institute for Fiscal Studies, a new national funding formula and proposed cuts to the education services grant will have on schools.

The unions claim their calculations show that 92 per cent of schools could face real-terms budget cuts over the next four years and that schools with the most deprived intakes would face the greatest average losses in real-terms. Strapped for cash: The website shows the potential cuts at a prominent school

Data from the website shows that the average loss of funding for primary schools would be £401 per-pupil, rising to £578 in the most deprived schools. For secondaries, the figures are £365 and £780 respectively.

Details of the national funding formula have not yet been released by the government – however it has said the final outcomes will not be the same as the formula used in the unions’ calculations.

Mary Bousted, the general secretary of the ATL, urged the government to increase funding for hard-pressed schools.

“If [the formula] just reallocates the existing budget many children will lose out, with some of the most deprived children being hit hardest,” she said.

“It is ill-conceived to think the formula for schools’ funding can be reformed alongside real terms cuts to the overall schools’ budget.

“No school should be forced to cope with a drop in funding that will jeopardise its ability to deliver a broad and balanced curriculum and recruit and retain staff. All children deserve a fair chance to succeed and should not suffer because schools are under-resourced by the government and teachers over-worked.” Kevin Courtney, who leads the NUT, said no head teacher should be put in the position of “increasing class sizes, leaving building repairs undone or cutting staff and resources simply to balance the books”.

“Nor should any parent accept this for their child. We are one of the richest countries in the world. We can and we should be funding our schools properly,” he added.