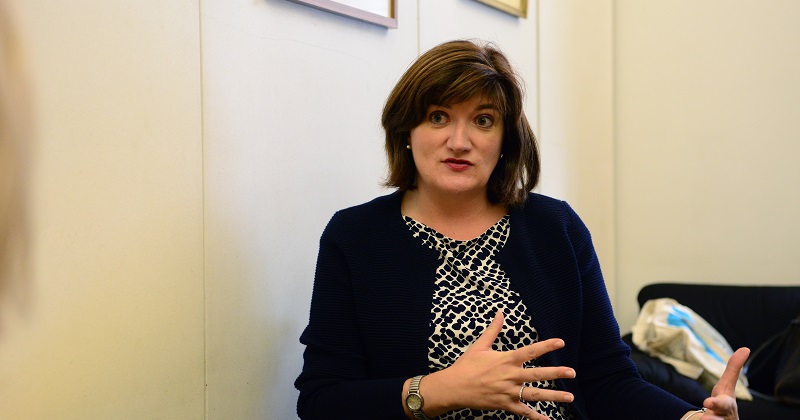 Nicky Morgan has revealed she often had to “fend off ideas” from Downing Street during her time as education secretary, and called for her successor to be given “space” to develop policy.

In an exclusive interview with Schools Week, Morgan spoke for the first time about the pressure placed on her by the prime minister’s office and repeated claims that new plans for grammar schools would “detract” from other reforms.

The former education secretary also hinted that she had blocked a move to use pupil nationality data for immigration purposes during her time at the Department for Education, and that her team had considered legislation to make PSHE compulsory in all schools.

I wouldn’t rule out voting against the government

Morgan, who spent two years as education secretary, before she was sacked in July, has become a thorn in the side of the government, vocally opposing plans for more selective schools – telling Schools Week that she “wouldn’t rule out voting against the government” on the issue.

But despite her misgivings about the grammar proposals, Morgan said she wanted and expected new education secretary  Justine Greening to be a “great success”.

“I hope Justine is given the space to develop all the other things that I suspect she wants to do with the education system.

“I think part of the time, being secretary of state is fending off other people’s ideas. I mean, we had people coming up with lists of things that schools must do all the time. Other government departments. Number 10.

“You know, schools must do this, and they must do that, and everything else. Well, if they did all that, then they’d be leaving at midnight every night and they won’t actually ever get any work, you know, academic study done. So you are there to sort of defend the education system very much as well.”

Morgan said the government was “on the verge of something exceptional in our English education system” due to academy reforms implemented during her tenure, and warned that proposals for new selective schools could “risk undermining what we’ve seen in the last decade”.

“My concern is government departments can only deliver so many reforms, and this is something that can distract from that,” she said.

Apart from grammars, another policy dominating Greening’s first months in the role are the changes to the school census which requires schools to collect data on pupils’ nationality and birth country.

Campaigners who oppose the change say the information could be passed to the Home Office for the purpose of monitoring immigration.

The government has taken steps to prevent this, but Morgan admitted there had been “talk” about sharing the information while she was still in charge, and indicated that she had blocked it.

“One of the things that people don’t know about the Secretary of State role is what you stop happening, and what you head off basically,” Morgan said, adding that passing on the specific data was “not something that we would want to see”.

She also said that during her tenure she considered making  PSHE and sex and relationships education compulsory in all schools, and that the current requirement on LA-maintained schools to teach aspects of those subjects “should apply to all schools”, including academies.

“We were thinking very, very hard about how we would do it, what legislation we would need, or other guidance, and working with other interested parties.”