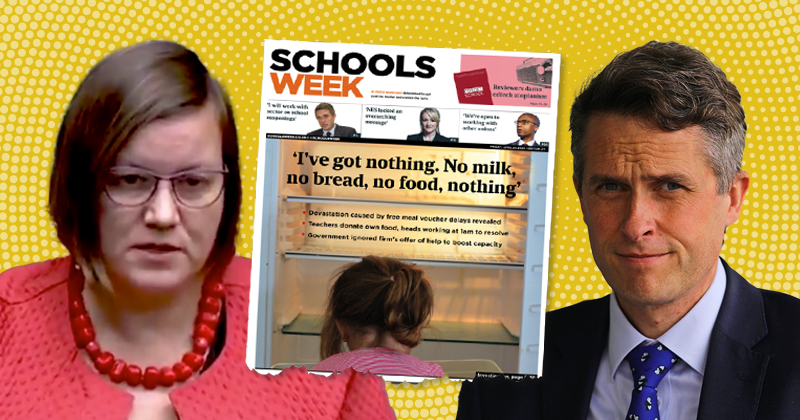 Parents were left waiting “too long” for financial support under the government’s national free school meal voucher scheme, according to a probe that has exposed officials’ lack of oversight of the £384 million contract.

A National Audit Office investigation, published today, reveals that parents were left waiting on average five days to receive the £15-per-week vouchers as the scheme struggled to cope with demand after launching.

However, the report also reveals a lack of oversight from the Department for Education – including ministers not knowing whether the firm running the scheme, Edenred, has made a profit on the contract. Officials also had found the firm did not have the “financial standing” for such a contract, but awarded it anyway (read our key findings here).

Despite promising vouchers would be delivered in four days, the department didn’t collect information on processing times. Nor did the government check key performance indicators over how many helpline calls were being answered.

The report also revealed that Edenred did not know the voucher scheme would be extended during Easter until former education secretary Michael Gove announced it – on the Saturday of the holidays.

The firm had planned to use the holidays to upgrade its system, but instead saw its services stretched to breaking point as parents were left without vouchers for weeks. The firm had just over 11,000 school administrators signed up at the start of April, which rocketed to nearly 19,000 by the start of May.

The report found that in April, it took an average of nearly five days to process orders – however the wait time dropped to just a few hours in July 2020.

Meg Hillier, chair of the Parliamentary public accounts committee, said: “Edenred’s systems buckled under the pressure and schools and families found it much too difficult to get in touch when things went wrong.

“DfE and Edenred eventually managed to turn things around – but too many parents had to wait too long to get the support they needed.”

The investigation found the department did not know how many children received vouchers, as it did not require schools to provide pupil details to avoid Edenred handling “a large volume of sensitive personal data”.

The DfE has also not made use of a contractual clause to scrutinise Edenred’s income – meaning it “did not know details of the potential profit or loss Edenred may have made”.

One of the firm’s performance indicators was that it should answer 90 per cent of telephone calls within 30 seconds. However, the DfE “did not monitor performance against this measure” in the early weeks of the contract, the report found.

When the DfE did start collecting data, from May, Edenred answered just 76.5 per cent of calls that month.

Paul Whiteman, general secretary of school leaders’ union NAHT, said the delivery of vouchers was a “particularly stressful and difficult point in the Covid crisis for schools… Although the intentions behind the scheme were good, it is clear that the government’s chosen delivery system was inadequate.”

While the report did flag “poor performance” at the start of the contract, head of the NAO Gareth Davies stated the “performance steadily improved as the scheme progressed”.

For instance, average waiting times for schools to request vouchers fell from 42 minutes in late April to “virtually zero” by July. The number of emails received from schools peaked at 8,878 on April 29. Edenred introduced an artificial intelligence system to deal with this, which resolved nearly three quarters of queries.

Edenred also pointed out it had 10 days to build and launch the scheme following “initial contact” from the DfE.

But Geoff Barton, general secretary of the Association of School and College Leaders said that, “even in the constrained timeframe involved it should have been possible to do better than the chaos which ensued”.

In total, 94 per cent of schools registered for the scheme. As of September, Edenred had processed orders for £427 million worth of vouchers. Of these, some £37 million had expired or were cancelled. Edenred paid unclaimed vouchers back to the department.

Childrens minister Vicky Ford said the government took “substantial action to make sure children do not go hungry throughout the pandemic”.

“The NAO has recognised the swift action we took so that eligible children could access this important provision while schools were partially closed”.

The report “recognises how Edenred delivered a scheme of unique scale for the DfE which the majority of parents said worked well and which translated every pound of public money into vouchers for children who needed them”, a spokesperson for the firm said.