The National Audit Office has today published its investigation into the Department for Education’s national free school meal voucher scheme.

The report highlights many of the problems that thwarted the scheme throughout its first few months, such as parents facing lengthy waits for vouchers and problems accessing the firm’s website (exposed as part of a Schools Week investigation earlier this year).

While the NAO points out that performance steadily increased as the scheme progressed, the report highlights a lack of oversight from the Department for Education.

The report found the department does not know how many children were supported by the scheme, nor whether Edenred – the firm that ran the scheme – made a profit or met some of its key performance indicators.

1. £384m on vouchers, but it’s not known how many children were helped

The firm issued 10.1 million vouchers in total, but these could cover more than one child in a family or last for more than one week. The DfE forecast the final cost of the scheme would be no more than £384 million – 81 per cent of the maximum £473 million envisaged at the start.

However the DfE “does not know precisely how many children have been supported by the voucher scheme”. This is because schools weren’t required to submit pupil details to avoid Edenred “having to handle a large volume of sensitive personal information”.

2. DfE has no idea how much profit Edenred made

Edenred generated revenue from buying vouchers from supermarkets at a discount on their face value. The firm has refused to say what this margin is, but it’s understood the industry norm is around four per cent.

Under the contract, the DfE has an “open book arrangement” granting it access to Edenred’s income and costs relating to the scheme – but the department chose not to use them, admitting it “did not know details of the potential profit or loss Edenred may have made”.

Prior to awarding the contract, the DfE’s economic and financial assessment concluded that Edenred’s UK business “did not have the financial standing that would normally be required for a contract of this value”.

But due to the speed required to launch the vouchers, the DfE went ahead anyway (the firm was already registered on a framework with the government’s Crown Commercial Service and was handed the voucher contract without the usual tender process).

Such a situation would normally require a “parent company guarantee” (a form of security to protect the government should Edenred not deliver under the contract). But this was also waived as it “would not be possible in the time available”, despite the department admitting it had been “mindful that Edenred might need additional financial support, particularly to put right problems at the start of the scheme”.

The company, however, didn’t ask for extra cash and covered the cost of extra work, for instance on IT systems, itself.

The department’s preferred choice for the scheme was originally to uplift benefits, but other departments said this wasn’t possible to distinguish between families eligible for free school meals and other benefits recipients. A proposal to give cash to schools wasn’t favoured for “security reasons” and face-to-face contact increasing the spread of the virus.

The time it took Edenred to process orders for eCodes (schools ordered eCodes which were then converted into vouchers) dropped from an average of 4.93 days in April, to 0.16 days in July. Average waiting times for schools fell from 42 minutes in late April to “virtually zero” by July. The NAO report stated this “indicates poor performance” at the start of the contract.

The report flagged up school staff logging on late at night to order codes, and found parents couldn’t get prompt support (calls to the firm’s helpline “increased rapidly” from 727 on April 1 to 3,940 on April 14). 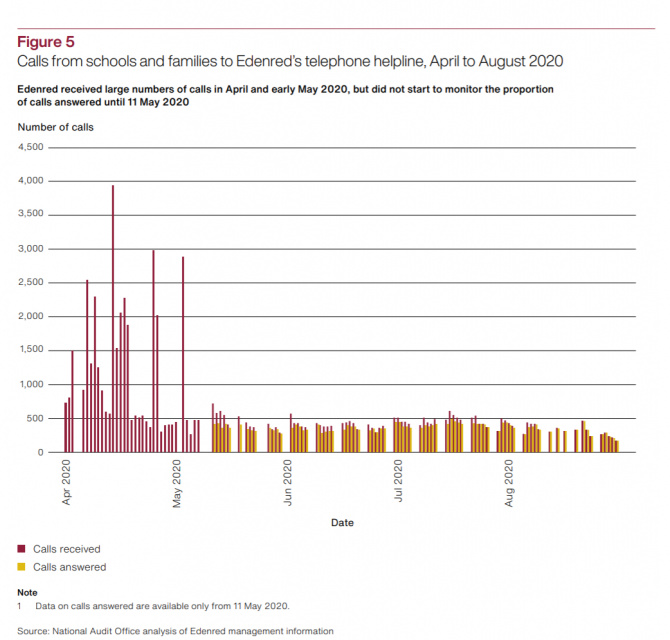 Also, as of the start of September, Edenred had processed orders for eCodes worth £427 million. Of these, some £37 million of eCodes had expired or been cancelled, leaving £389 million of valid eCodes.

Edenred upgraded its website in July to allow parents to cancel “lost” eCodes and get them resent.

When the early problems surfaced, the department considered buying vouchers from another supplier. But, instead, they “relied heavily” on day-to-day “liaison” with Edenred to oversee the scheme (including minsters “intervening directly”).

However, despite telling schools vouchers would be issued within four days, the department “did not systematically collect data on processing times that could be used to measure performance against the undertaking”.

One of the firm’s performance indicators was that it should answer 90 per cent of telephone calls within 30 seconds. However, the DfE “did not monitor performance against this measure” in the early weeks of the contract, the report found.

When the DfE did start collecting data, from May, Edenred answered just 76.5 per cent of calls that month. 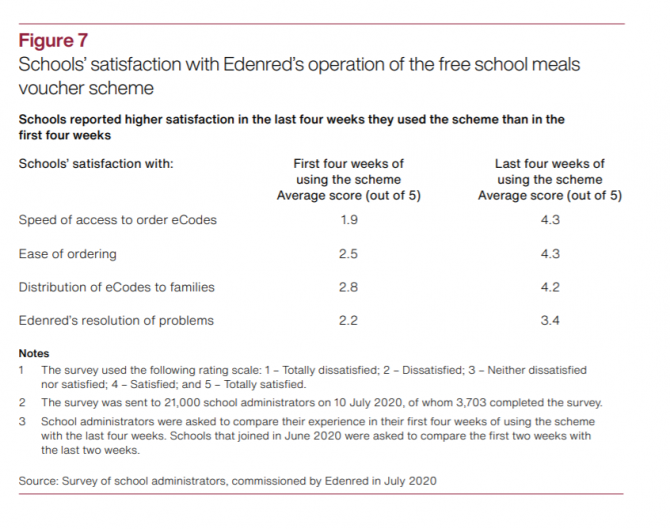 Despite coming under huge pressure, the government insisted for weeks it would not fund vouchers over the Easter holidays. Edenred had been planning to use the period to “process outstanding orders and make adjustments to its systems to improve performance” – after the troubled start.

However, former education secretary Michael Gove announced on the first Saturday of the Easter holidays the government would infact fund the vouchers, which the NAO said meant the “pressure of the system continued”.

Even worse, Edenred told the NAO it “was not informed in advance of this announcement” – throwing its plans to catch-up off course and somewhat explaining the ensuing problems over the following weeks.

At the start of the scheme, more than one in ten schools were further than five kilometres from their nearest participating store. Although the report states coverage “may have improved” as more supermarkets joined the scheme later on.

There was much criticism that two of the six retailers first announced as part of the scheme were the premium supermarkets Waitrose and Marks & Spencer, while other more local and lower cost chains were left out.

The report shows the average order per week at Waitrose totalled just £151,000, compared to over £6 million at Asda. 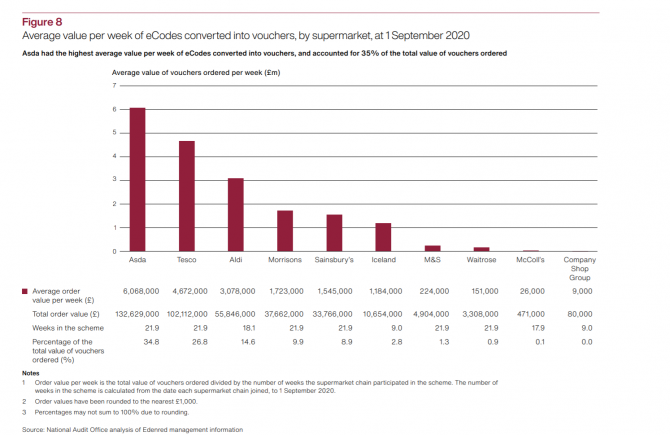