How can schools reduce exclusions? Last year groups from the education select committee to Ofsted to the mainstream press berated schools over bad practice without offering much in the way of solutions or guidance as to what “good or promising” practice (the Department for Education’s new buzz phrase – “best practice” is apparently now banned) looks like.

A large comprehensive in south-east London has spent the past five years developing systems to proactively prevent exclusions by embedding inclusive practice throughout the school. We visited to see how it’s working.

Managing behaviour is “the kind of job that’s hard to plan”, says Carolyn Roberts, the headteacher of Thomas Tallis school in Blackheath. “You’re on the go all day – reacting, reacting, reacting. It’s relentless.” So when she had a senior leadership team vacancy back in 2014, she decided to appoint a staff member who would systematise behaviour in the same way as the school had already done for achievement, exams, curriculum. “I was looking for a person who had the intellectual capacity to work out the structure that we needed, so behaviour management in the school wasn’t dependent on one person’s big personality,” she says.

We have standards where we think they matter

That person turned out to be Shaun Brown, a geography teacher who’d left mainstream in 2004 for a large pupil referral unit in the London borough of Tower Hamlets, where he worked his way up to head of inclusion.

The main change Brown brought to Tallis – in addition to the systems – was to train all staff in a trauma-informed approach. Sam Sheedy, the school’s assistant head for behaviour, explains: “If a child has suffered childhood trauma, such as maternal abandonment, that is scientifically proven to impact brain development. They shouldn’t be treated just as a naughty student. They should be treated as ‘this is an issue that we need to address’.”

Staff are taught to look out for behaviour that might indicate a student has an underlying issue that needs deeper investigation, and refer them to the pastoral support team of five full-time and five part-time staff. Having a conversation with a student who’s behaved badly allows the team to probe for any potential safeguarding issues. “Kids don’t come in and shout about their problems,” says Jessica Wing, the leader of the pastoral welfare team.

Depending on the outcome of that meeting, the next step might be time in the withdrawal room, a restorative meeting, a referral to the learning support unit, SEN or safeguarding team, or a sanction in the internal exclusion room.

This all means that rather than a strict tariff system, where a specific behaviour earns a specific sanction, their consequences have more flex. The challenge, Sheedy says, is to make it appear fair to students and staff, but still make allowances for individual circumstances.

It sounds like a fine line, but Roberts says that it’s no different to the British justice system.

We’re discussing the recent Ofsted blog that suggested exclusion might not be the right punishment for a girl who brings in a knife to self-harm. Roberts agrees. “What we have is a system that’s been built up by precedent and case law. And so we would say, ‘This is what we would usually do when someone brings a knife in. Is this case sufficiently similar to all of the other cases, or is there a new precedent that needs to be set?’” 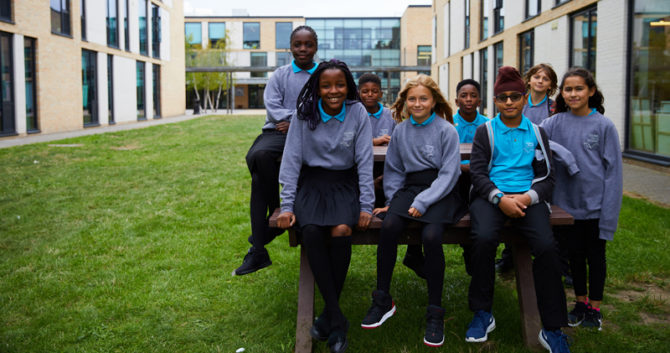 The blog drew criticism from some advocates of a “no excuses” approach, who argued that failing to exclude one child for bringing a knife on to school premises for any reason sets a dangerous precedent.

Brown is having none of it. “There’s an inherent laziness and unprofessional dimension to not wanting to know and understand what’s behind someone bringing a blade into school.”

He believes schools should be a therapeutic community, where students can express themselves and learn to regulate their behaviour, and he worries that overly strict schools might be causing children to repress behaviour that, if allowed to manifest, would communicate important information. “All unexplained behaviours are cause for concern. If you take a zero tolerance approach what you are essentially saying is, we don’t want to see them. 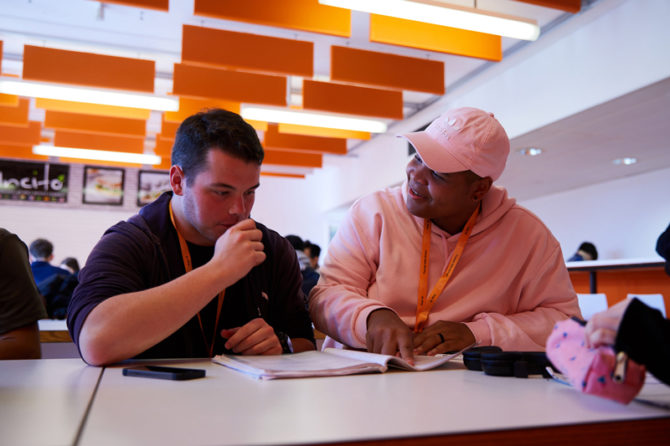 “Implicitly behind a zero tolerance approach is the idea that essentially all children want to cause trouble and be difficult. But most children, most of the time, come to school because they want to be there. When they’re not doing what you’ve asked them to do, there’s a reason for that, and we should be curious and interested about why that is. If they tell you to fuck off, that’s unusual. It doesn’t mean there isn’t a sanction, but you should encourage your staff to think ‘crikey, what’s going on there? We need to investigate this’.”

While Roberts has high expectations for the 2,000 young people in her care, she rejects the idea that schools should indiscriminately “sweat the small stuff”. The Tallis uniform policy is incredibly relaxed. Students can have any kind of hairdo and wear earrings, any coat and any kind of shoes, including trainers. 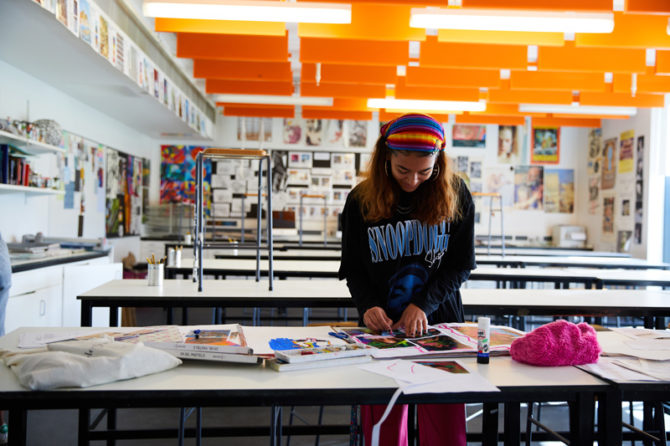 “There’s a misunderstanding that uniform is the same as standards,” says Ashley Tomlin, the deputy head for achievement. “We have standards where we think they matter.”

Hoods, however, are banned on school property. Pupils also wear bright turquoise polo shirts and sweaters, which makes them easy to identify in the community – and for the senior leadership team to enforce a 4pm curfew in a problem area just across from the school.

The measurable outcomes of their changes to the behaviour system have been a 5 per cent drop in persistent absence; a two-thirds reduction of managed moves, a halving of their fixed-term exclusion (FTE) rate, and a drop from 4 to 1 per cent in repeat FTEs, all of which is worthy of note. But it’s the qualitative benefits that I’ve come to Thomas Tallis to try to get a sense of. 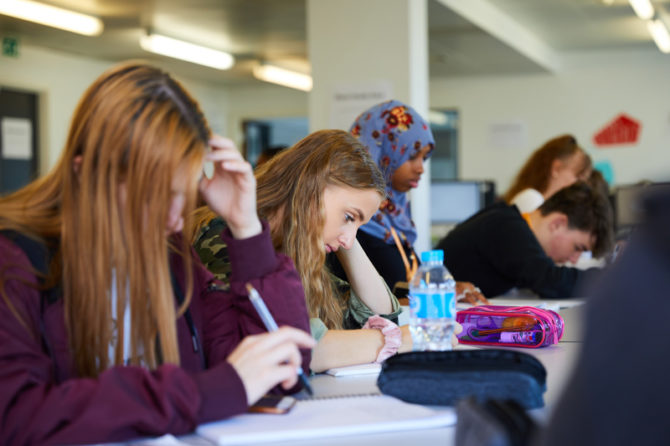 As Lisa Sproat shows me around the learning support unit that she runs, she tells stories of pupils who’ve spent time here to help them to cope with life-changing tragedies – parental death, traumatic separation, abuse. We look through some of the “All about me” projects – scrapbooks in which students can express the traumatic experiences in their home lives. Sproat manages a small team of trained counsellors, but she also works one-on-one with students who are going through difficult times, for six weeks, three hours a week.

Brown is critical of the government’s narrow view of inclusion, as set out in the SEN code, which, he says, simply supports those with disabilities and cognitive learning needs to better access the curriculum. Inclusion needs to be broader than focusing on those kids who’ve been given an official designation, which is why the Tallis framework includes provision for all students, as well as those with identified needs.

Learning is one of the framework’s strands, along with wellbeing, safeguarding and behaviour support. “It doesn’t make sense to box off curriculum and pastoral,” Tomlin says. “Especially where students are underachieving. Often there are significant links between their wellbeing, their learning and their behaviour.”

Early intervention is key. “Hear that sound?” Wing asks as we’re scrutinising the whiteboard in the pastoral support office. “Those pings, they’re emails coming in from teachers letting me know about something that’s happened, or requesting an RM”. That’s a restorative meeting, and there’s a whole load scheduled, even for today. Teachers are encouraged to flag incidents with students that they feel would benefit from a mediated discussion. “It’s 20 minutes of awkwardness right now, in return for a year without awkwardness,” Wing says with a grin, parroting the sales pitch she gives to reluctant first-time students. Once they’ve done one, she never has to sell it again, she says – in fact, students request them to try to sort things out with teachers or fellow students.

Understanding the reasons behind bad behaviour doesn’t mean allowing pupils to behave badly, Roberts says later in her office. And the school isn’t trying to eliminate FTEs altogether – it believes they are a necessary stage in a behaviour system. “There does have to be a punishment that means they have to be removed from the community for a while,” she says. “Because the most important thing in having a stable and happy school is that you’ve got a community that feels happy and confident and includes everybody, and that a child who assaults the integrity of the community has some kind of sanction for that.”

What’s really important, though, is to use the serious sanctions sparingly so that the school community views them as undesirable.

“If you’ve got 30 per cent of a school getting a FTE over the course of a year, nobody cares,” Sheedy says. “Once a student’s had it, they’re much more likely to get others, because they realise it’s not the end of the world. But for a student that’s never had it and has never had anyone within their cohort that’s had it, it’s a really significant consequence.”

They shouldn’t just be treated as a naughty student

Brown has just left Thomas Tallis to head community and inclusion at the charity The Difference, which wants to improve the links between PRUs and mainstream. The idea is to train more leaders with experience of behaviour management in alternative provision, to return to mainstream and prevent exclusions in the first place. Which is precisely what Thomas Tallis is aiming for with its pre-emptive approach to behaviour.

There’s been talk that the new Ofsted framework might try to shift schools to be more inclusive. Roberts is keeping her fingers crossed: “Schools like us would welcome Ofsted taking an intelligent interest in inclusion,” she says, choosing her words carefully.

Brown is also hopeful about the long-awaited Timpson review, and he feels the tide is changing. “There’s this great big group of students who are just bumping around the system because schools won’t keep them, and that’s not acceptable,” he says. “We all need to think about who they are and what we’re doing with them.”