What makes good online teaching? Pupils have their say

Deprivation was a barrier to children getting an education during school closures. That’s not news. We all know of schools that had to print and post worksheets in the early days of the pandemic, and of pupils who struggled to join online lessons because they were sharing one computer with two other siblings.

But what is new is some emerging evidence that graphically illustrates the scale of the problem. We have been going through our anonymous user analytics at Oak National Academy and cross-referencing it with other research to try and deconstruct the pattern of online learning at the peak of the pandemic and in its aftermath.

What we saw is that pupils in areas of high deprivation faced three particular barriers.

First, they had to have access to a device. An Ofcom study estimated back in November 2020 that between 1 and 1.8 million children (which is at best 11 per cent of all pupils in England) did not have access to a laptop, desktop or tablet at home.

Things did improve during the course of the pandemic. Based on our figures, in May 2020 55 per cent of users accessed Oak from a computer. This rose to 78 per cent a year later, in May 2021.

But unsurprisingly, access to computers was not equal across income groups. The poorest children were less likely to have computers. We saw a nine percentage point gap in computer access between the most deprived and least deprived quintiles of the Income Deprivation Affecting Children Index.

After schools opened, this gap reduced to about six percentage points, probably as pupils could use computers in school, and did not have to rely on sharing devices at home.

So why are we so preoccupied with the type of device? Because they have a direct bearing on how long a child spends learning.

Not all devices are equal either

This is the second barrier to online learning. A pupil will spend four times longer in an online lesson if they’re on a tablet than on a mobile phone, rising to five times longer if they’re on a computer. This stands to reason. Mobile phones are full of distractions that the names of England’s rivers or solving simultaneous equations struggle to compete with.

Oak videos were praised by many teachers, who said they were the next best thing to them teaching a lesson themselves. But when pupils had no choice but to view them on a mobile phone, their value diminished. For example, a maths teacher whose pupils largely used mobiles told us they simply could not stick with a recorded Oak lesson without succumbing to digital diversion. She had to find other ways to teach them.

Finally, even having a state-of-the-art computer is futile if you run out of data halfway through an online lesson. Watching a lesson video on Oak would set back your data allowance by around 250 MB, which will exhaust an average monthly plan within a few days.

We successfully campaigned to have Oak’s lessons ‘zero-rated’ by the telecom giants so pupils got no data charges while on the platform. But it’s worth remembering that, by and large, online learning is not free.

And that’s why this still matters a great deal, even though schools have fully re-opened. The pandemic has accelerated a drive to more digital and online content in education, from homework and revision to flipped learning. Schools have invested a lot of time and resource into setting themselves up for it, and can see the benefits of sustaining their digital offering. Which means a computer and a data plan are now necessities, not optional extras.

The challenge we’ve uncovered is significant, and work must now be done to find a solution to match. Making policy isn’t our remit, but whether it’s extending zero-rating so pupils can freely access high-quality educational content or guaranteeing a laptop and internet for every child (as Scotland has promised), we won’t tackle attainment gaps fairly if we don’t bridge the digital divide first. 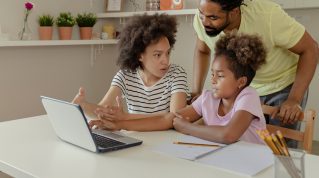 Oak National Academy use also hits near record high as 120,000 pupils log on during closures