The country’s best-paid academy chiefs are pulling even further ahead from the rest, with warnings of a “super league” emerging among leaders.

But a Department for Education data collection gaffe means its supposed crackdown on chief executive pay has been halted for the past 18 months.

Schools Week’s annual CEO pay investigation can also reveal 25 leaders secured rises of £15,000 or more, with 29 now earning at least £200,000. But some trusts introduced caps, and one slashed more than £100,000 from its leader’s salary.

The rich get richer

In 2017, the Education and Skills Funding Agency (ESFA) began writing to academy trusts paying individuals more than £150,000, or multiple salaries between £100,000 and £150,000, to ask them to justify such high salaries from the public purse.

Our analysis is based on the accounts of the 277 trusts identified as receiving letters in the past four years. Twelve have since closed, joined other trusts or not published accounts, leaving 265.

Accounts for 2019-20 published over the past few months show 55 per cent of trust bosses (146) secured rises, more than three times the number whose pay was cut (40).

But the 20 best-paid chief executives were more likely to get an increase – with three-quarters getting rises last year.

Their average pay rise was also 4 per cent (£9,694), compared with 1 per cent among all 265 trusts that received a government warning over pay – suggesting the best-paid are pulling further ahead.

“We don’t need a super-league of CEO pay,” said Dr Mary Bousted, the joint general secretary of the National Education Union. “I’ve no problem with education professionals being well-paid. But the increasing gap between CEO and teacher pay is toxic.” 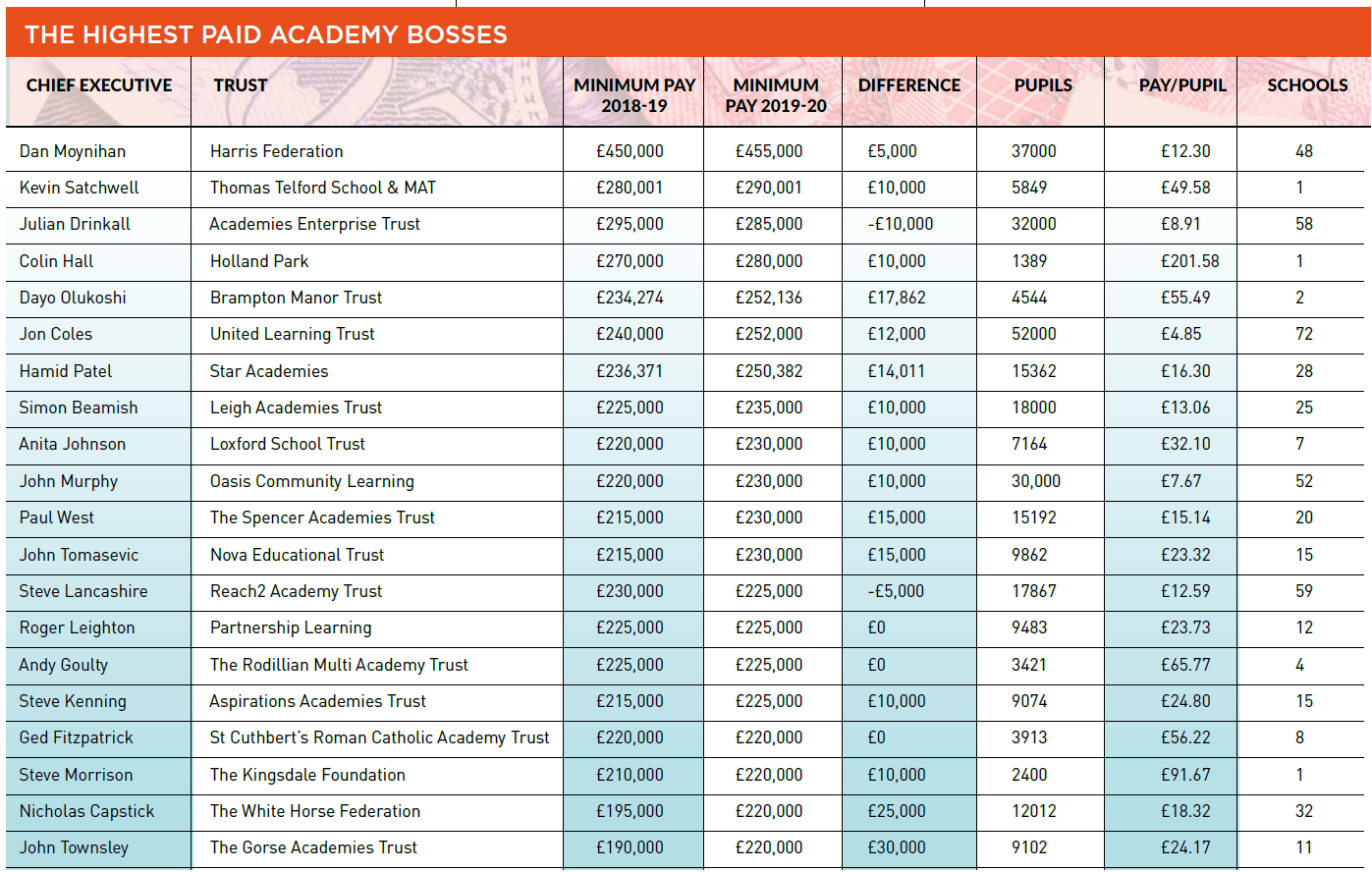 England’s best paid trust chief executive, once again, is Sir Dan Moynihan of the Harris Federation. His pay moved up a £5,000 pay band to at least £455,000. The trust declined to comment.

The second-best paid leader, the Thomas Telford School’s executive head Sir Kevin Satchwell, also moved up £10,000 in pay bands to at least £291,000. A trust spokesperson said about half his salary was for leading the separate five-school Thomas Telford MAT as an “executive adviser”. 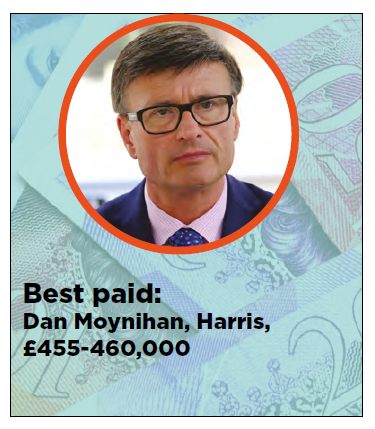 Anita Johnson of the seven-school Loxford School Trust, also had a £10,000 minimum band hike to £230,000, making her the best-paid female school leader.

A trust spokesperson said her pay was “incomparable” with other CEOs as she received only £88,178 for her trust executive work. The rest of her salary is as head of Loxford, one of the country’s biggest all-through schools.

The only two new entrants to the top 20 table from our previous analysis had rises. The White Horse Federation’s Dr Nicholas Capstick’s minimum pay band jumped £25,000 to at least £220,000, while the Gorse Academies Trust’s Sir John Townsley reached at least the same amount after a £30,000 hike.

A Gorse spokesperson said the trust was expanding and secured “well above average” results for primary and secondary pupils despite a disproportionately disadvantaged intake.

Nine of the 20 high-paying trusts had added schools in the year. But school numbers in the other trusts remained flat, and three had just one school.

The DfE says a data collection issue has stopped it sending any warning letters in the past 18 months. At least seven rounds of letters were published soon after being sent in the previous two years.

It was trying to resolve the issue “in a way that gives us, and academy trusts, confidence that any letters issued would be fair and proportionate”.

It remained committed to challenging excessive pay “wherever it is clear it is not proportionate to the job role, or linked to improving pupil outcomes”, but would not confirm if or when letters would be resumed.

Bousted added: “These rises show the government is absolutely toothless. The letters didn’t work. And if they’re not even doing that, what are they doing?”

The public clampdown does appear to have had some successes.

Cranford Community College announced a £150,000 cap, knocking £40,000 off executive head Kevin Prunty’s pay band. It did not respond to a request for comment. 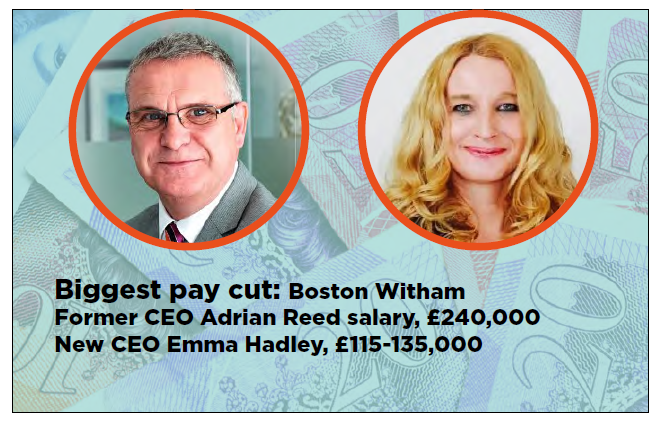 Meanwhile, the Hatton Academies Trust hired new chief executive Rob Hardcastle is on at least £90,000 – a £95,000 drop on his predecessor’s minimum. William Thallon, the trust’s chair, said Hardcastle’s pay could rise with performance, but followed ESFA guidance that “reinforced” its directors’ concerns about high pay.

Ark Schools said its chief executive Lucy Heller volunteered for a £11,158 pay cut given the “tough financial environment” for schools, leaving her on £198,961.

CEO pay at the Kingsdale Foundation has also been slashed since its accounts were filed from more than £220,000 last year to £200,000 or less as part of a restructure.

Rise of the trust central team

Forty-seven trusts listed five or more staff on at least £100,000 in their latest accounts, and 16 trusts had ten or more.

The Harris Federation had 41 high earners across its central team and 48 schools, with four staff on £200,000 or more.

Holland Park, a standalone London trust that has been dubbed the “socialist Eton”, reported a £280,000 minimum salary for chief executive Colin Hall, with three other staff on more than £120,000 each. It declined to comment.

Senior figures earned £154,444 on average at trusts with more than 15 schools on the DfE’s watchlist, although the figure includes pension and national insurance contributions.

“A few years ago, you’d never see a trust with more than one person on over £100,000, but it’s increasingly common,” said David Butler, a partner at Bishop Fleming and executive author of the annual Kreston Academies Benchmark Report.

Butler said larger trusts needed greater financial skills and were competing with the private sector to recruit for roles such as chief finance officers. “If the organisation’s got £50 million of income, it probably warrants a relatively sizeable salary.”

The 2021 Kreston report found a general correlation between trust size and executive pay, albeit with “some anomalies”, Butler added.

Pay hikes also appeared linked to growth. “If you have to justify a £150,000 salary to ESFA, it’s easier if you’ve added 2,000 pupils. I’ve no issue with that, though at what point do diminishing returns kick in?”

Some trusts highlighted growing responsibilities. Aldridge Education said a £60,000 jump in the minimum earnings for its leader to at least £170,000 reflected leadership changes. The previous year’s top earner was an interim chief executive who filled in until April 2019 with “only a portion” of the new CEO Jane Fletcher’s responsibilities and objectives.

A spokesperson at the 28-school E-ACT, which gave its new chief executive Jane Millward a £25,000 rise on her predecessor’s pay to almost £181,000, said the trust aimed to “attract and retain the most skilled and talented individuals”. This had ensured senior salaries were “benchmarked and commensurate with the size and scale of the role.”

Trusts ‘know how to spend funds with propriety’

Leora Cruddas, the chief executive of the Confederation of School Trusts, said attracting and retaining talent to lead complex organisations and ensure the best outcomes for children was a “top-level system priority”. She criticised “arbitrary pay caps” and said trust boards knew they had to spend public funds with “regularity and propriety”.

High pay is not limited to academies. The 2019 school workforce census showed secondary heads in local authority schools (£92,728) only narrowly behind their academy peers (£93,969).

The Taxpayers’ Alliance found the average council employed more than seven staff on at least £100,000.

Meanwhile, the average housing association paid its chief executive £181,086 in 2019-20, according to Inside Housing analysis – higher than the academy trusts warned over CEO pay, which averaged £148,774.

The Health Service Journal also found 65 NHS trusts sought government sign-off in 2019 for CEO pay of more than £150,000. The National Governance Association has called for similar approval processes in education.

Stark differences in pay based on trust size

Again, our analysis reveals stark differences between trusts on a per-pupil basis.

More than 30 leaders’ salaries came in at more than £100 a pupil, while for eight larger trusts, including United Learning, Ark and Oasis, it came in under £10. 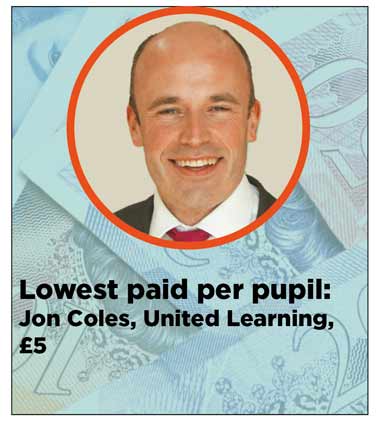 Sir Jon Coles, the chief executive of England’s largest trust, United Learning, received a £12,000 rise last year, leaving him the sixth best paid on £252,000. But it still left him the lowest paid per pupil on the list at £4.85. The trust’s sister charity pays his wage.

A spokesperson said the rise was the first since 2012, and was fully offset by a corresponding cut in pension contributions.

Mark Vickers of Olive Academies was the highest per pupil at £675.11, but he said its alternative provision was “accepted to be a specialist high-needs area”.

The trust has 237 pupils, but it supported another 2,000 mainstream pupils, which would average £71.52 a head. His pay also included an accommodation allowance and headship role. He said the board knew salaries had to be “justified” and value for money. 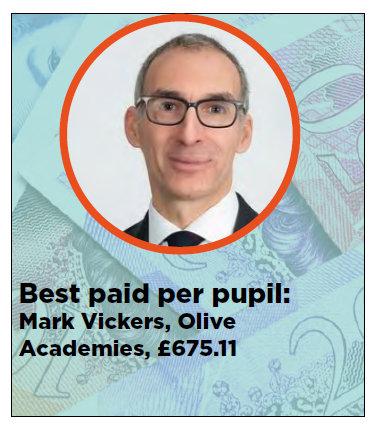 “No one begrudges someone being paid the rate for the job,” said Meg Hillier, Labour chair of the Commons public accounts committee.

“But we need to be wary of the golden escalator of pay which has seen some senior trustees and heads demanding more and more to keep up with the highest paid.”

A DfE spokesperson said the “overwhelming majority” of trusts set reasonable pay. “We consistently challenge trusts where we deem executive pay to be too high and will continue to do so.”

Some named leaders have since left their roles and salary, pupil and other data may have changed since trusts filed their accounts.

Data is based on actual salaries where given, or on minimum salary bands where not.

Salaries in the tables are for the CEO where named, or the trust’s highest earner where not.

Schools Week looked at CEO where trusts employ one, or the most senior figure where not – with CEO used as a shorthand for the group as a whole.