There are “cold spots” in the support that struggling schools are getting from Teaching School Alliances across the country, according to new government analysis.

The National College for Teaching and Leadership has released initial findings on the work of teaching school alliances, which are amalgamated teaching schools delivering initial teacher training and school improvement in their local area.

But this support, given to struggling schools from those rated highly by Ofsted, is not consistent across the country, and it is lacking in certain areas that need it most.

The findings reflect previous analysis by Schools Week, which two years ago found that only two of the 563 teaching schools open in 2015 were located in areas serving the 25 per cent of most deprived populations.

Across the government’s 12 new social opportunity areas, all of which were identified by education secretary Justine Greening as social mobility sinkholes, school-to-school support is inconsistent. 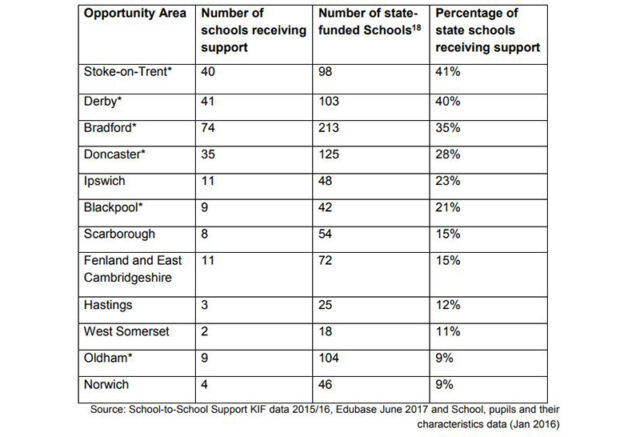 Certain opportunity areas are “cold spots for school-to-school support”, noted the report. “There is scope to focus more on these areas and boost support being received there.”

Most support that was offered to schools was directed at senior leadership teams, with other popular support categories including “key” subject improvement and increasing the quality of special educational needs.

Of all the support programmes running in schools across the country, 37 per cent were for schools which are below floor standard, or rated either ‘inadequate’ or ‘requires improvement’ by Ofsted.