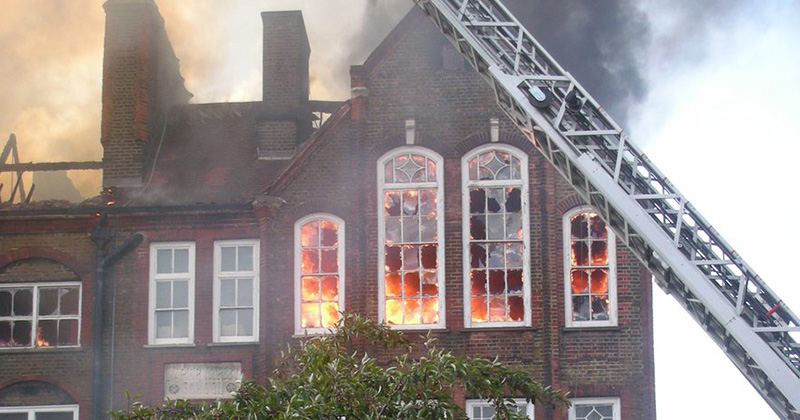 Not one London school that has had a fire so far this year had sprinklers fitted, the London Fire Brigade (LFB) has said.

Firefighters have attended 46 fires in London schools since January 1, and found none of the 18 primary schools, 14 secondary schools and 14 pre-schools and nurseries visited was fitted with an automatic fire suppression system (AFSS).

Sprinklers are the only fire safety system that detects a fire, suppresses a fire and can raise the alarm. Sprinklers save lives and protect property

The LFB has repeatedly called for sprinklers to be mandatory in new schools and those being refurbished, but the government is yet to update its position.

Of the 75 school fires in London in 2018, sprinklers were only fitted in one secondary school.

In 2017 there were 90 fires, with sprinklers fitted in just two of the secondary schools attended by the LFB.

In the 442 school fires attended by the LFB since 2014, crews found sprinklers in just 10 schools.

Sprinklers are particularly important during summer holidays when buildings are vacant and fires can go undetected for longer, the LFB said.

“It is shocking that we have been campaigning for a number of years to make sprinklers mandatory in new schools and retrofitted during major refurbishments and yet this year, every school fire we have been called to has had no sprinklers fitted,” said Charlie Pugsley, deputy assistant commissioner for fire safety.

“Sprinklers are the only fire safety system that detects a fire, suppresses a fire and can raise the alarm. Sprinklers save lives and protect property.”

The LFB said millions of pounds are wasted every year repairing fire damage in London’s schools when sprinklers could have prevented the spread of fire.

Last week was the ten-year anniversary of the Thomas Fairchild School fire, in Hoxton. The primary school was closed for nearly three years after more than 100 firefighters battled the blaze for 10 hours.

The issue of sprinklers in schools has been a topic of contention for many years, but achieved particular prominence in the wake of the Grenfell Tower fire in 2017, which left 72 people dead and many more homeless.

Ahead of the first phase of the Grenfell Tower inquiry last year, the LFB called for action to install sprinklers in schools and residential high-rise buildings.

Earlier this year the Department for Education called for evidence on how best to update guidance on fire safety design in schools.

Figures released last February revealed that just 74 of the 260 schools rebuilt as part of phase one of the government’s priority school building programme have, or are planned to have, sprinklers fitted.

A Department for Education spokesperson said: “The safety of pupils and staff is paramount and schools are fundamentally safe places, designed to be evacuated as quickly as possible in the event of a fire.

“All schools are required to have an up-to-date fire risk assessment and to conduct regular fire drills.

“All new school buildings must be signed-off by an inspector to certify that they meet the requirements of building regulations and where sprinklers are considered necessary, they must be installed.”