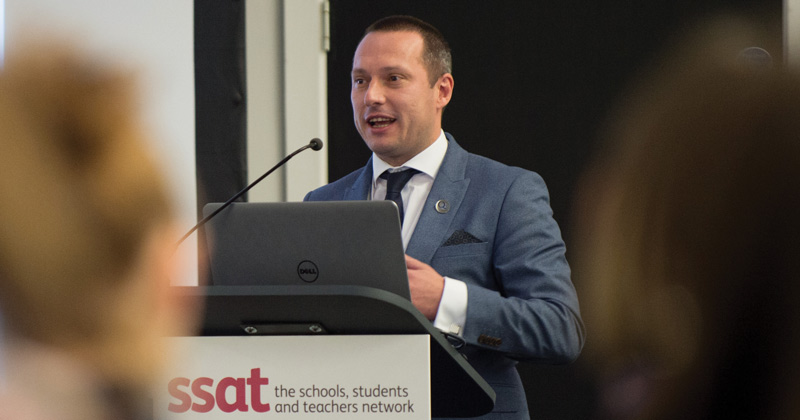 Having “very young members of staff” who are prepared to implement a new system of behaviour management has been crucial to a new school’s success.

Peter Lee (pictured), the head at Q3 Academy Langley, an academy outside Birmingham, said his young staff were willing to employ methods drawn from other academies and free schools, which allowed the senior leadership team to build the school up “from scratch”.

These strategies include the “SLANT” directive used by Michaela Community School in north-west London, which requires pupils to sit up straight, fold their arms and track the classroom leader with their eyes, when the teacher says the word.

Lee was impressed when he visited the school, although his staff only use it for two minutes at a time – whereas he once observed it deployed for 45 minutes at Michaela.

Pupils can also receive a five-minute detention for every item they forget from their pencil case. After working in another school where pupils didn’t bring pens to exams, Lee decided to provide pupils with pencil cases in year 7, with star rewards for having the full set and a punishment for forgetting anything.

They think you’re the devil incarnate, but it works

“This works,” he said. “You say it at parents’ evening, and they think you’re the devil incarnate, but it works.”

During transitions between lessons, pupils are given 15-minute detentions if they turn around, clip another pupil’s heels, or talk beyond saying good morning.

Pupils are also required to call all adults on site Sir or Miss, make eye contact and smile.

Mobile phones are collected at the start of the day and locked away, following one experience in which he spent seven hours trying to find a stolen iPhone before finding it hidden inside a pupil’s shoe. Pupils would also text their parents to complain about teachers, who would then turn up to have a shout at staff.

Meanwhile, a tight lunch process has ensured two-minute slots between eating sessions for the year 7s and year 8s, who are currently the only pupils at the school.

“People have called it militaristic, and I get that – perhaps that’s my police background,” said Lee, who trained as an officer before switching to teaching. “But it has to be.”

The “biggest single determiner” of a school’s success is behaviour, he suggested, having worked at those rated ‘outstanding’ through to ‘inadequate’.

But the young team have enabled him to lay down behaviour and other policies without resistance.

“A lot of our systems and processes would have probably only worked with very young members of staff,” he said. “If I had become a head in a fully-functioning, established school, would I have been able to do some of the things we’ve done? I don’t think the answer is yes.”

He has also implemented a family lunch, having seen it at Michaela, so pupils and staff can sit together and discuss suggested topics, from politics to ethical issues, with one another.*

*This article has been corrected to make clear that only staff and pupils, rather than parents, attend the family lunch. The school is also an academy rather than a free school.