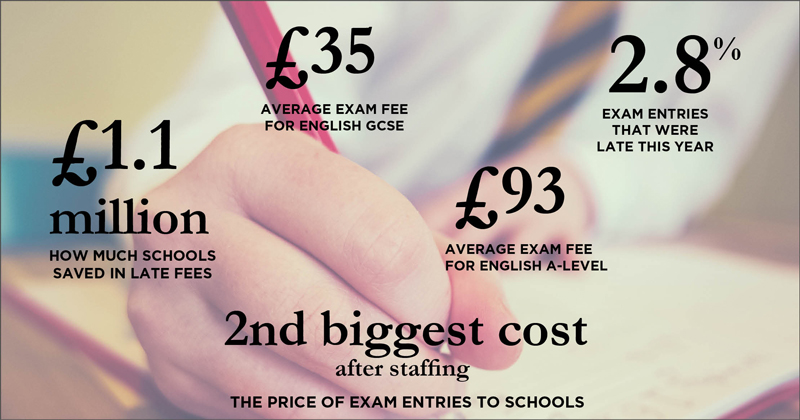 Schools saved more than £1 million in exam entry fees last year by entering more pupils on time, even as the cost of exam entries crept upwards.

The proportion of late entries fell from three per cent last year to 2.8 per cent this year across GCSE and AS/A-level entries, Ofqual’s latest figures show.

For every pupil entered late, schools must pay a premium to exam boards. The cost of an exam doubles if a pupil is entered late and can triple if entered very late, at each of OCR, Pearson, WJEC and AQA.

This summer continued a downward trend in AS-level certificates since they no longer count towards A-level grades, while the reformed GCSEs in English and maths changed entry patterns.

This year, the average entry fee for English language GCSE and maths GCSE was £35 across all exam boards. Given nearly 440,000 late GCSE entries across all subjects, Schools Week estimates schools paid £15.4 million in late fees on top of the regular cost of entry.

Last year, we calculate more than £16 million was spent, which works out at around £4,700 for every secondary school in England. Charges for English and maths GCSE were £33 on average, and there were 487,000 late GCSE entries, making the cost almost one million pounds higher.

Last year A-level exams cost £93 on average. There were 90,845 late entries, at a cost of £8.4 million. Overall, we estimate schools and colleges spent around £23.3 million on late fees this year, compared with £24.4 million last year, a saving more than £1 million.

A substantial drop in the number of pupils entering for AS exams means that less was spent on exam entry fees overall, not just late costs. Around 800,000 fewer exams were entered last year, as pupils returned to taking all their exams at the end of their courses. With AS fees averaging around £50, this is an estimated saving of £40 million, or around £12,000 per secondary school or sixth form.

Jill Stokoe, a policy advisor at the National Education Union, said the cost of exam entry fees was the second highest for schools after staffing, and late fees are affected by factors such as sick pupils, pupils moving to higher-tier papers, or taking on new pupils late in the year.

At WJEC, costs for both GCSEs and the English A-level, will all rise by four per cent. WJEC doesn’t offer A-level maths in England.

At OCR, the costs for entry to English and maths GCSE and A-levels will increase by three per cent, which a spokesperson blamed on inflation.

Suzanne O’Farrell, an assessment specialist at the Association of School and College Leaders, said her union is “not persuaded” the administrative burden of late entries justifies “such large costs”.

Exam boards should reduce charges especially when a pupil changes tiers, “particularly given qualifications are undergoing such major changes”.

The union is now going to raise the matter with Ofqual.