In 2017-18, schools were responsible for referring 119,030 children in need to social care services, an increase of nearly 4,500 compared with the previous year.

Pupils are said to be “in need” if they are assessed as needing social care services to achieve a “reasonable standard of health or development”, or to prevent significant or further harm happening to them. This includes children with disabilities. 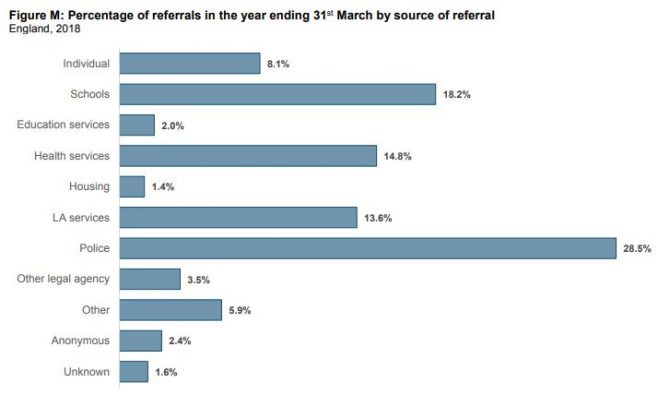 In March this year the government announced a review to examine and seek to improve the educational outcomes of children considered to be “in need”.

The review wanted to hear specifically from headteachers, designated safeguarding leads, special educational needs coordinators and educational psychologists, and feedback is still being analysed by the Department for Education.

Health services were the third most common source of referrals, dealing with 96,780 cases, or 14.8 per cent.

The data is drawn from the children in need census, which collects information about every child referred to children’s social care services every year, as well as any cases already being dealt with by local authorities at the beginning of the year.

Children in need are divided into three groups: children who have been given a child in need plan, those who have a child protection plan, and looked-after children who are in care. Reasons for being categorised as in need can include abuse or neglect, domestic violence and mental health problems such as acute stress.