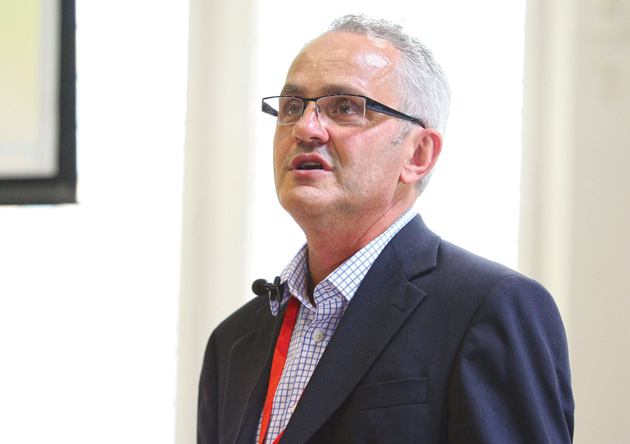 Headteacher John Tomsett has been accused of crossing a line and abusing a “position of trust that is sacrosanct” after having a sexual relationship with a former A-level student.

Tomsett, headteacher of Huntington School, in York, is appearing before a Teacher Regulation Agency conduct hearing this week.

He admits having a sexual relationship with a former A-level pupil in the summer of 1992 after she left Eastbourne Sixth Form College, where he was an English teacher at the time. But he denies it amounted to professional misconduct.

Tomsett told the hearing today that many teachers had sex with students in the 1990s, adding that while in the current climate it is “utterly wrong”, society “has changed massively”.

“I’ve saw lots of examples, whether it was right or wrong, of teachers having sexual relationships with students. In the current climate it is utterly wrong.

“I was her teacher and in some ways it was wrong, that is surely true on reflection but society has changed massively.”

The woman told the panel that Tomsett – who is almost ten years older than her and married – kissed her in the classroom on his last day of teaching at the school, and wrote in her diary that it was “very professional” of him to wait until then.

The pair had a series of sexual encounters at local beauty spots in the summer after the pupil finished her A-levels. They had no contact between 1997 and 2004, but met twice in 2011, having sexual intercourse both times.

However, in an email exchange, Tomsett reiterated that he was not prepared to leave his wife when the student declared her ongoing love for him.

“I am not denying that the kiss took place. When I read Student A’s account of my final day – and what was said a lot of it was about the sadness of leaving,” Tomsett told the hearing.

“It was Student A who sent the letter that led to the relationship in the summer.

“When I look back at this I shudder, but I was a teacher who was a romantic, in love with literature type, I can’t look at it in any other way. I love using ink pens.

“Now if I saw romantic comments like I wrote in a memory book I would investigate it but back then it was completely different.”

Tomsett said he remembered the kiss as a “goodbye kiss in my memory”, adding: “I don’t know what I remember it has been so gone over so much – I know the kiss would have been tender and it would have been a kiss.

“Some days later I was in a blind panic when she sent me a lengthy letter in a A4 envelope with love heart patterns on it, it was a very significant letter I thought ‘this is a problem’ – it was full of love and interest in me.

“That is where I made my mistake I should just have phoned the college. It was something that was compromising in my marriage.”

Ben Bentley, representing the Teacher Regulation Agency, said the “thorny issue that we need to grapple with” is the continuing professional relationship between Tomsett and the student.

He said Tomsett had tutored the student – now in her mid-40s – but also invited her to contact him at his home address, adding: “You [the panel] have to consider if there were a blurring of professional boundaries”.

“Mr Tomsett crossed the line and abused a position of trust that is sacrosanct in the relationship between the teacher and pupil.”

Tomsett told the panel today that he believed the student was someone who came across as “confident and assertive”, adding he saw “different aspects of her character” when she gave evidence yesterday.

Andrew Faux, representing Tomsett, said: “We know from earlier discussions of the standards applicable in 1992 are different to those of today.

“Mr Bentley references guidance from 1995, that is a nonsense – professional people need to be judged by the standards at the time.

“You have heard that when he worked at the college he was a published poet and wanted to carry on what he loved doing at university, working with people who were passionate about the subject.

“You have heard from Pupil A that she wanted to put herself over as an adult and did not reveal her inner turmoil.

“She portrayed herself as a confident young woman, they did not have penetrative sexual intercourse, she ended the affair by a letter she was able to be in a degree of control over what was going on – and she felt strong enough to terminate the relationship.”