Older people are more likely to think teachers have a manageable workload, and many parents still don’t know about changes to GCSE grades, a new survey shows.

The Department for Education has published its latest survey on the British public’s attitude towards education.

The DfE surveyed 2,491 respondents and the data was weighted to reflect the make-up of the country.

1. Only 47 per cent of people feel teachers work too hard

The OECD’s TALIS teacher survey found that lower secondary teachers in England spent on average 46.9 hours a week working in 2018, up from 45.9 hours five years ago. The average working hours across the OECD countries was 38.8 in 2018.

The DfE’s teacher workload survey last year reported that that the average number of hours worked by teachers and middle leaders in 2019 was 49.5. The national average for all full-time workers is around 38.

Forty-four per cent of respondents believe teachers are paid about the right amount, compared to 42 per cent who feel that teachers are not paid enough. 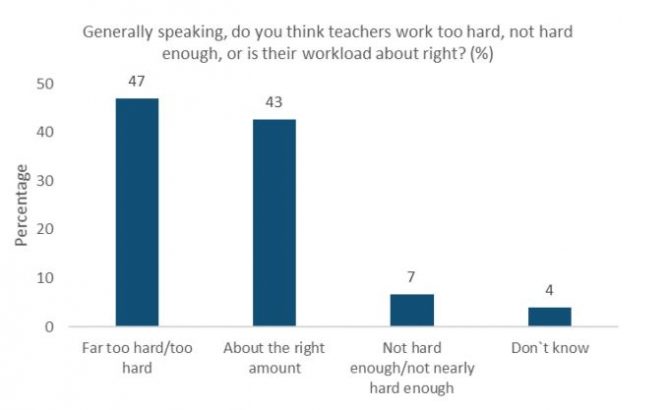 2. Older people are more likely to think teachers have it easy

Attitudes towards teacher’s pay and workload differs depending on who is asked.

Among those aged 75 years and above, 36 per cent were least likely to say teachers worked too hard, compared with around 50 per cent of respondents aged 18 to 74 years.

People’s level of education also affected their answers, with degree holders most likely to say that teachers worked too hard (60 per cent), compared to 36 per cent of those without qualifications.

Perhaps unsurprisingly, there is a linear relationship between whether respondents knew a teacher in a personal capacity and their attitudes towards teachers.

Forty-two per cent of those with family or friends who work as a teacher believe they are not being paid enough, and 47 per cent felt they worked too hard, compared with 39 and 35 per cent respectively among those who don’t know a teacher. 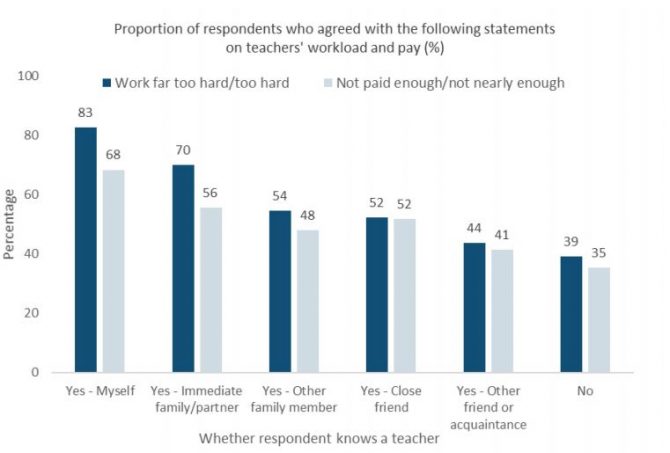 Despite the changes having come into effect in 2017, a fairly large proportion of parents still haven’t heard about the shake-up of the GCSE grading system.

Just 56 per cent of respondents with children in their household said they’d heard of the changes.

5. Four in five think studying a language is important

The survey found 83 per cent of respondents believe studying a foreign language GCSE is very or fairly important.

A further 61 per cent said it will be much more important in the next 10 years.

Last year initial teacher training census data revealed the government had only met 62 per cent of its recruitment target for modern foreign languages.