A major international survey has revealed the views of thousands of teachers in England and across the world.

The OECD has published the results of its latest teaching and learning international survey (TALIS). The organisation spoke to 4,000 teachers and leaders in 200 schools, who were all randomly selected for the study.

We’ve pulled out some of the most interesting findings for England’s schools.

Despite a commitment by the government to tackle teacher workload in England, the latest survey results show the hours worked by teachers has actually increased since the last time the data was collected.

In 2018, lower secondary teachers in England spent on average 46.9 hours a week working, up from 45.9 hours five years ago. The average working hours across the OECD countries was 38.8 in 2018.

This finding is particularly embarrassing for the government, which has placed great emphasis on tackling workload in the profession. Ministers launched a “workload challenge” in 2014, and a teacher workload advisory group led by Dr Becky Allen reported last November.

Education secretary Damian Hinds said: “These findings reflect many of the frustrations that I heard from teachers and heads when I first took on the role of education secretary and underlines the importance of the teacher recruitment and retention strategy, that I launched in January of this year.

“We know that too many teachers are having to work too many hours each week on unnecessary tasks, which is why I have taken on a battle to reduce teachers’ workload so that they can focus on spending their time in the classroom doing what they do best – teaching.”

The survey has identified a huge gap in the proportion of new teachers and experienced teachers who receive professional development on student behaviour and classroom management.

While 63 per cent of those in their first five years of teaching received CPD in this area, just 42 per cent of more experienced teachers took part, leaving a 21 percentage point gap.

Overall, 47 per cent of all English teachers participated in student behaviour and classroom management CPD, short of the average across all countries of 50 per cent. 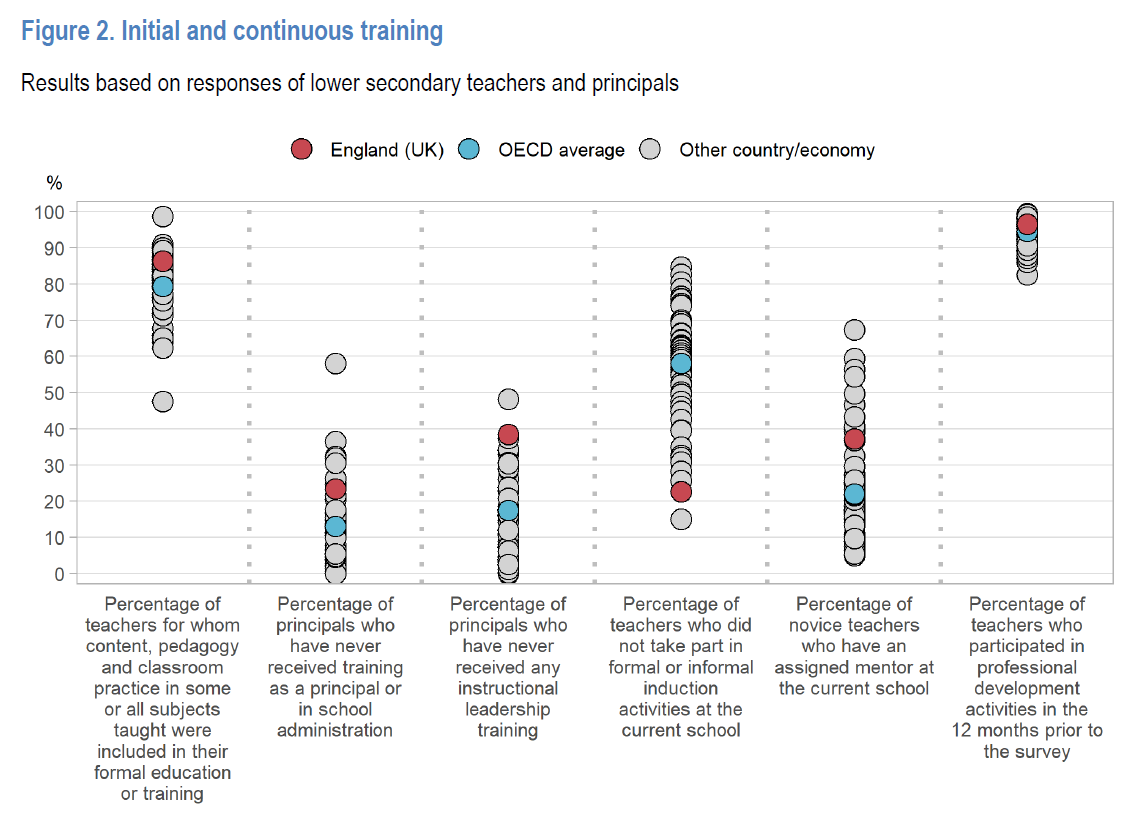 3. Pupils are more likely to evaluate their own progress

The survey found that 69 per cent of teachers in England frequently let their pupils evaluate their own progress, compared with 41 per cent across all OECD countries.

In around half of OECD countries, England included, the amount of classroom spent on actual teaching and learning has decreased.

Here, teachers spent around 80 per cent of classroom time on teaching and learning, down 2 percentage points over the past five years.

5. England’s teachers are more likely to be inducted and mentored

The survey asked teachers whether they received an induction when moving school or mentoring at the beginning of their careers, and found this country does better in these areas than most others.

Seventy-seven per cent of teachers in England reported participating in some kind of formal or informal induction upon joining their current school, compared with an average of 42 per cent across all OECD countries.

Thirty-seven per cent of teachers in their first five years reported having an assigned mentor, much higher than the 22 per cent average across the OECD.

School leaders in England are also more likely to get training in school administration, with 64 per cent reporting having been on such a course, compared with an OECD average of 54 per cent.

Although 90 per cent of teachers in England reported having been trained to teach in mixed-ability settings as part of their formal training, just 69 per cent felt prepared to teach in these settings when they finished their studies.

The survey found that on average, 41 per cent of teachers in this country work in classes where at least 10 per cent of pupils have an identified special educational need, much higher than the average for the other countries taking part, which was 27 per cent.

The average age of a teacher in England is 39, compared with an average of 44 across the other countries taking part in the survey.

At the same time, just 18 per cent of teachers in England are over 50, compared with 34 per cent across the other countries.

Headteachers in England have an average age of 50, two years below the Talis average. Just 6 per cent of English heads are over 60, well shy of the 20 per cent across the other countries.

8. Women leaders are in the minority 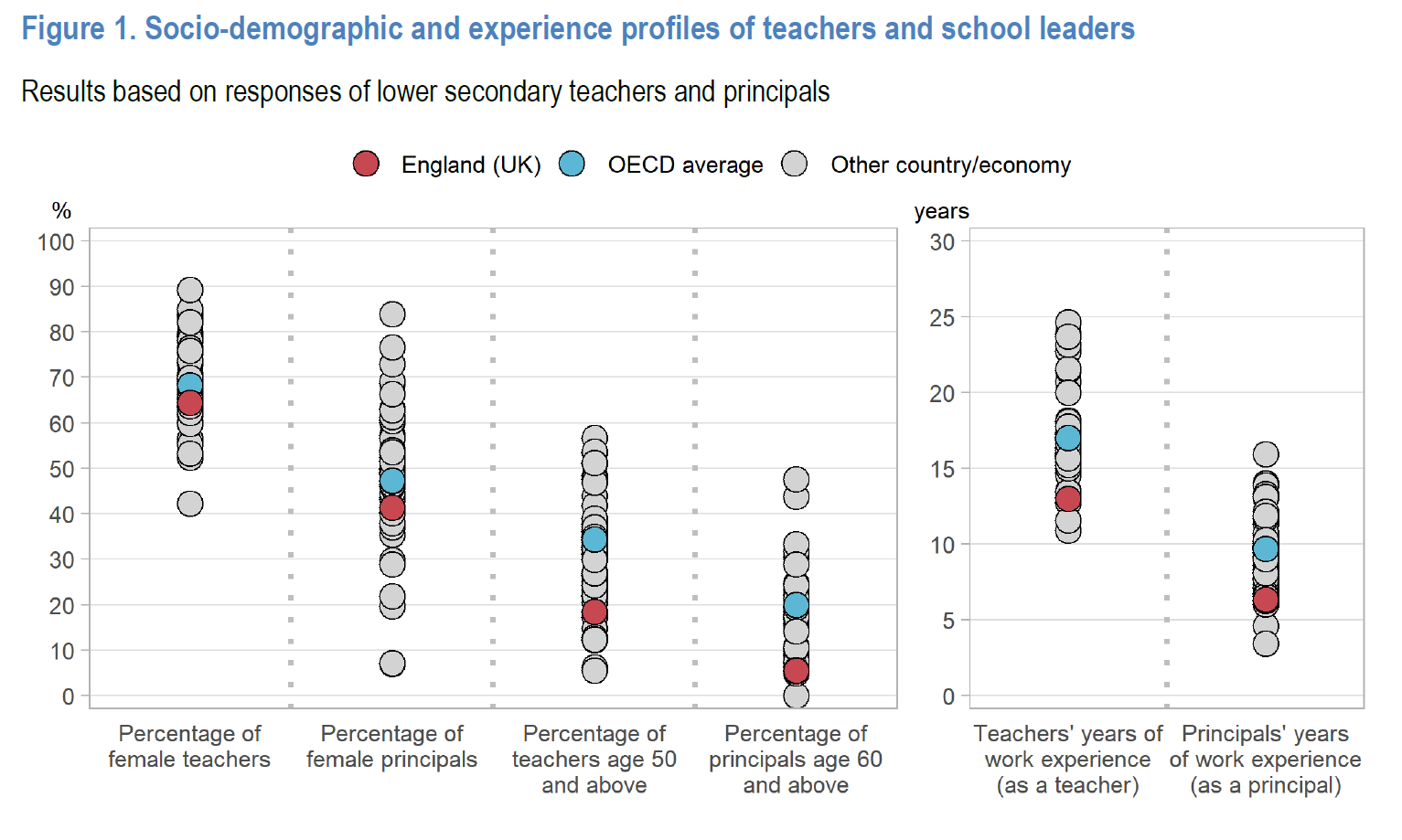 Despite women making up 64 per cent of teachers in England, they make up just 41 per cent of the country’s leaders.

The average across all OECD countries is 47 per cent.

Ninety-six per cent of teachers in England said teachers and pupils “usually get on well”.

But 21 per cent of leaders reported “regular acts of intimidation or bullying among their students”, more than the OECD average of 14 per cent.