Pupils still get higher marks in reformed BTECs than in A-levels – but the gap has closed, new analysis shows.

But research from FFT Education Datalab shows many schools and colleges are still delivering the old BTEC qualifications, even though they are no longer included in performance tables.

The blogpost, published today, reveals that just nine per cent of grades awarded in the reformed BTECs in 2018 were the highest score of starred distinction, compared with 37 per cent in the legacy qualifications. 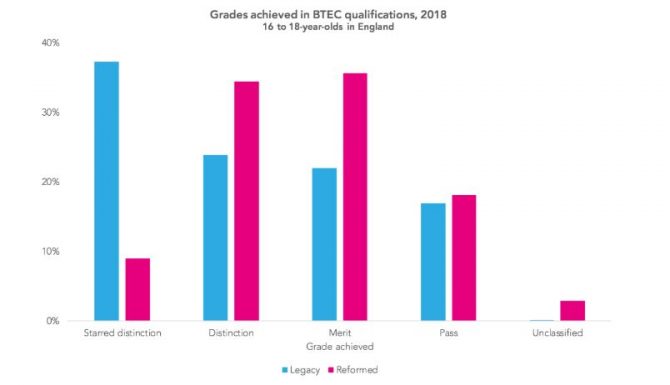 As the grades awarded in the reformed BTECs tend to be lower than those in the predecessor qualifications, the results have become much closer to equivalence with A-levels. However, pupils still tend to achieve the equivalent of half a grade higher in the new BTEC qualifications.

Analysis shows that those who entered the legacy BTECs achieved much higher level three average point scores in those qualifications than they did in A-levels. They achieved an average 43 points in the BTECs (equivalent to between grade A and B and A-level) and 28 points in A-levels, or just below a grade C. The difference of 15 points is equivalent to one and a half grades at A-level.

However, in the reformed BTECs the difference was much narrower at just five points, equivalent to half a grade at A-level. 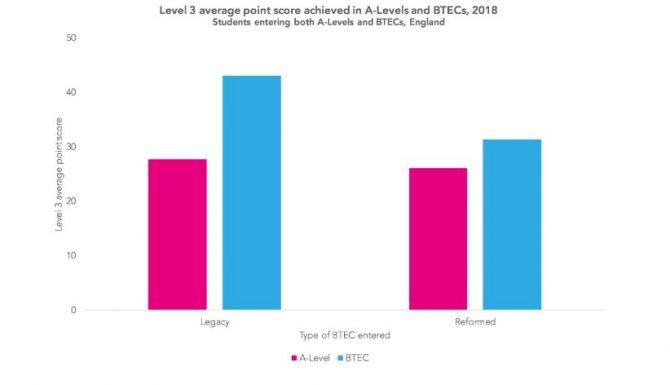 In 2017, before the reforms were introduced, pupils tended to score much more highly in BTECs than in A-levels regardless of their prior attainment. However, in 2018 this difference was much reduced.

The legacy BTEC qualifications will still be funded until the end of 2021 but are not eligible for performance tables. The data shows this has not put many schools and colleges off from offering them, though. If data included legacy qualifications, then an extra 62,000 pupils could be added to the numbers of applied general students in 2018, and another 35,000 for tech level students.

“The downside of the changes is that take-up of reformed BTECs has been relatively slow,” wrote chief statistician Dave Thomson. 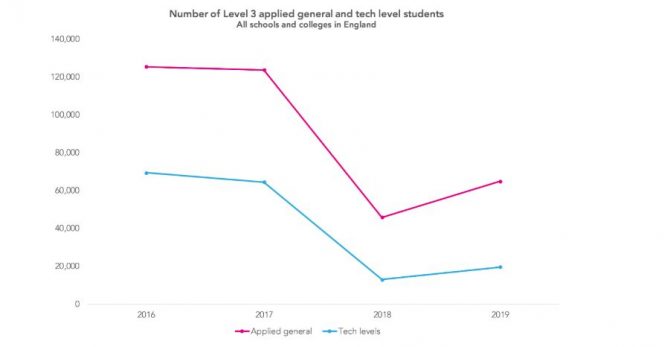 “Many schools and colleges have continued to deliver predecessor qualifications. Up to now there have been no funding incentives to change and the incentive that publication of data in performance tables adds appears not to have had much effect.”

In September, another study by Education Datalab found pupils studying BTECs score an average of a grade higher than they do in GCSE English and maths.

In the summer, exam board Pearson had to hike up the grade boundaries of its BTEC Tech Awards just days before pupils were due to collect their results