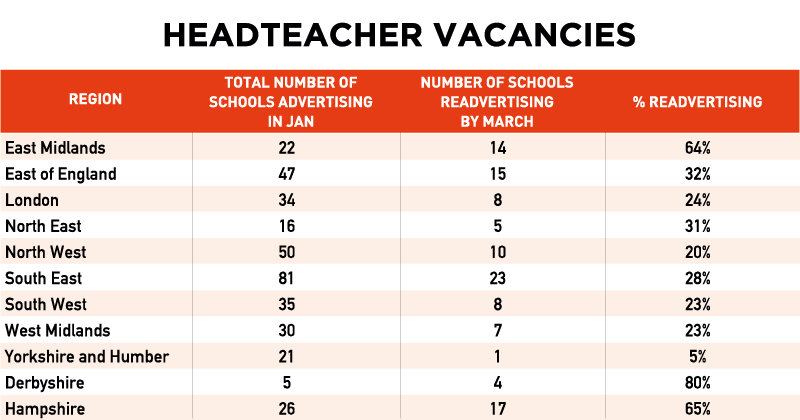 Primary schools are struggling to fill headships and are readvertising top roles at more than double the rate of secondary schools.

A quarter of primary schools (26 per cent) seeking a new head had to readvertise in the first three months of this year, compared with 10 per cent of secondary schools, according to figures from TeachVac.

In the past, secondary schools seemed to struggle more, said Dr David Owen, head of teacher education at the Institute of Education at Sheffield Hallam University.

He said previous research suggested there were more temporary heads in secondary schools than primaries, but he was “surprised” by the deteriorating primary recruitment.

Fewer primary schools were in teaching alliances or trusts, meaning they could struggle to locate upcoming talent when a head moved on – plus a salary of about £45,000 to £50,000 might not be an incentive for the extra responsibility, he said.

It’s the scrutiny, and churning through data, and not being in front of the children that discourages them

Derbyshire and Hampshire have fared worst: in January four out of five (80 per cent) of headships were readvertised in Derbyshire, 64 per cent in Hampshire.

The best rate was in Yorkshire and the Humber, where only 5 per cent of posts had to be advertised again.

John Howson, an education data analyst who runs TeachVac, said infant and junior schools, as well as faith and primary schools, struggled the most because the pool of candidates was small.

A wider range of senior leadership roles in secondary schools meant more people were prepared for headship than in the primary sector.

In January 2013, a similar rate (26 per cent) of primary top jobs were readvertised. But that was an 11 percentage-point increase on 2012 – showing substantial fluctuations in the pattern of recruitment.

Russell Hobby, general secretary of the National Association of Head Teachers, said candidates needed to be sure they would not lose their jobs if results fell, particularly in rural areas.

“The idea your career could come to an end if several children get poor results – that’s the main thing that needs to change for people to take on headships.

“It’s the scrutiny, and churning through data, and not being in front of the children that discourages them.”

The removal of bursaries for leadership courses such as the National Professional Qualification for Headship (NPQH) had also left small primary schools without the funds to back training, he said.

A survey by the National College of School Leadership in 2009 found 92 per cent of heads thought it was a “great job”, but a 2015 survey by The Key, an information service for school leaders, showed 86.8 per cent of respondents thought it a less attractive role than five years before.