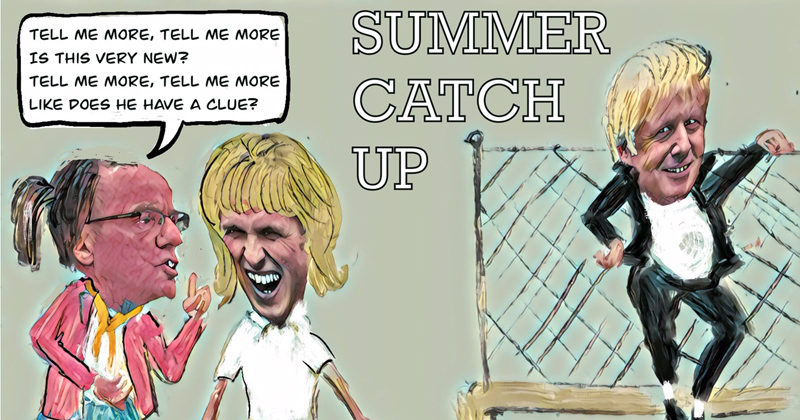 The government is under increasing pressure to produce a proper coronavirus plan for schools, particularly the renewed pledge to get all pupils back in school by September.

The fall-out follows the government dropping its “ambition” this week to get all primary pupils back to school before the summer.

Critics from across the political spectrum have slammed ministers for their lack of planning, with commentators pointing out pupils will soon be able to go to the zoo, but not return to school.

Prime minister Boris Johnson was repeatedly questioned over his plans for schools during the coronavirus briefing on Wednesday.

He said the primary plans were dropped because the prevalence of the disease “is not quite down far enough to change the social distancing measures in schools”.

He promised a “massive catch-up operation” over the summer and beyond to help pupils “make up for lost time”.

He said an announcement would be made by education secretary Gavin Williamson next week. Schools Week understands this will include plans for online and face-to-face tutoring.

Meanwhile, Williamson said the government is working to “devise a priority list so that schools are able, where they do have extra capacity, to welcome back more children”.

The DfE said further details will be available “in due course”.

Ministers need to ‘pull their finger out’

Labour leader Sir Keir Starmer told Johnson this week that “parents have lost confidence in the government’s approach, millions of children will miss six months of school, and inequality will now go up.

“It’s time he [Johnson] took responsibility for his own failures. This mess was completely avoidable.”

Former education secretary Justine Greening said it is “untenable to still have no government plan to get schools reopened… It’s absolutely crucial that ministers now pull their finger out and bring forward a plan.”

Meanwhile, former Ofsted chief inspector Sir Michael Wilshaw said the government “needs to get its act together”, while Labour MP Meg Hillier, chair of the public accounts committee, suggested Williamson had been “asleep on the job”.

But what can be done?

One of the plans suggested by the National Education Union, in its “national education recovery plan” published yesterday, is to teach classes in public buildings such as libraries, sports halls and religious buildings.

However, there are concerns over the lack of specialist facilities in such buildings, for example, science labs, art rooms and design and technology suites.

Others, such as education committee chair Robert Halfon, have called for an “army” of retired teachers to help out.

With at least ten per cent non-contact time for teachers, that would mean around 650,000 teachers are required. There are currently 450,000 full-time equivalent teachers in England, some of whom will also be clinically vulnerable and unable to teach.

“There is no realistic way of getting that number of additional qualified people into schools. The reality is: we will not be able to open schools fully to all pupils until the public health advice is that it is safe to teach in groups of up to 30,” Coles said. “That is what schools have the space and staffing to do.”

He called for that advice to be communicated “clearly and unambiguously for September. It will need to be explained to parents and to staff working in schools. We will need a united message about safety from experts and across the political spectrum.”

But a noteworthy development this week is a shift towards how schools can reopen, rather than opposition to it.

The NEU, for instance, in its education plan, called for a “‘can do’ mentality” in order not to “lose a generation, because the pandemic makes even more children poor”.

The union has previously come under fire for urging its members not to engage in any back-to-school planning and writing warning letters to headteachers looking to reopen their schools.

Ofsted chief inspector Amanda Spielman also said this week that “people have perhaps been looking at this from the point of view of what they can’t do, rather than what they can”.

“I would love to see more people in local areas really stepping up and saying, ‘I could make this happen’ and getting as much on the road as possible this side of the summer.”