The gender pay gap at Ofsted has increased since last year, despite pressure on organisations to narrow the disparity between men and women’s pay.

Figures released by the inspectorate today show that the median gender pay gap is now 19.8 per cent in favour of men, compared with 2.3 per cent in 2017.

The mean gender pay gap has also increased from 8.1 per cent in favour of men to 11.3 per cent.

Ofsted said the change this year is “predominantly due to the insourcing of early years’ inspection in April 2017”, which brought in a workforce of 253 people, 94 per cent of whom were women.

The proportion of women staff at Ofsted grew from 63 per cent to 67 per cent this year. 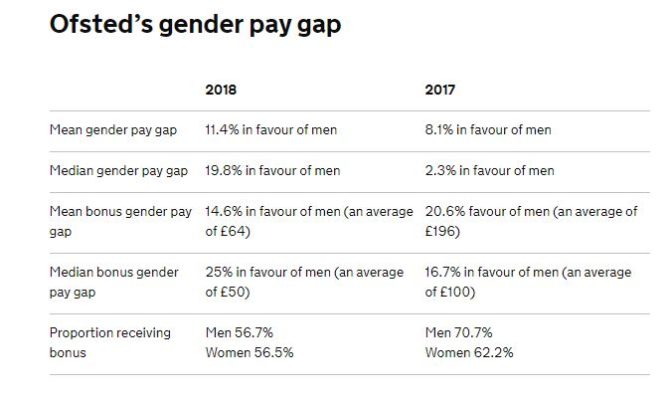 Ofsted’s figures show the inspectorate has gone some way to address the inequality of which employees receive bonuses this year, with almost exactly the same proportion of men and women receiving the pay outs at 56.7 per cent and 56.5 per cent respectively.

Ofsted’s report said: “On average, men continue to be paid more than women. Analysis shows that the main reason for this continues to be the proportion of men and women employees in different grades. There are more men in the upper pay quartile, where the pay is higher, compared with the lower pay quartiles.”

Figures released alongside the report show that, as of March 31 2018, 53 per cent of Ofsted employees in the upper pay quartile were women. In the upper middle quartile, 77 per cent were women.

However, the report said that many of the B2 positions will be coming to an end in early 2019 with the majority of employees securing a promotion to the B1 grade, meaning that the inspectorate expects “an improvement in our gender pay gap for the next reporting period”.

At the same time, the Department for Education has revealed it is having some success in closing its gender pay gap.