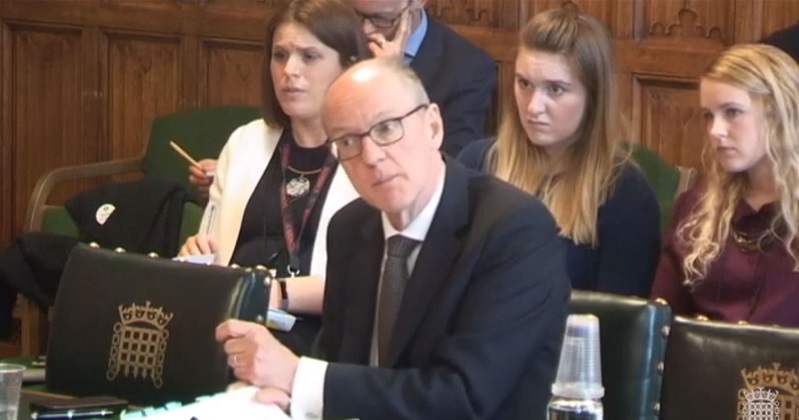 The education committee held a double session this morning as part of its inquiry into alternative provision.

As well as questioning schools minister Nick Gibb, the committee also put its questions to Kevin Courtney, the joint general secretary of the National Education Union, Stuart Gallimore, the president of the Association of Directors of Children’s Services, and senior Ofsted inspector Sue Morris-King.

Here are six things we learned.

1. The government WILL prosecute illegal schools

When asked what role unregistered provision should play in the education system, Gibb said it was important to distinguish between an “unlawful” unregistered school setting and an out-of-school setting, like a garage where a child goes one day a week to learn a vocational skill.

Ofsted’s illegal schools taskforce was given another £1 million to look into unregistered settings in March, but is still yet to prosecute a single school.

“We are devoting quite a bit of resource to prosecuting and closing down unregistered school settings where there are at least five pupils or one child with SEN and it’s essentially full time education,” said Gibb.

“They do need to be registered and they do need to be inspected by Ofsted, and if they’re not then it is unlawful and we prosecute. Ofsted has a pot of money in order to pursue those prosecutions and we take those things very seriously.”

However, he added it would be a “pity” to apply the same rules to part-time out-of-school settings.

2. Ofsted will judge schools on the AP they choose

Although he does not think unregistered, part-time alternative provision should be closed down, Gibb did say Ofsted will be holding schools to account for the provision they choose for their pupils and will be asking what steps they have taken to ensure it is safe and high quality.

“If the school has not taken those steps, that will be something Ofsted will judge the school over,” he said.

Responding to a question from committee chair Robert Halfon, who warned that of the 48,000 children in alternative provision, there were only “clear Ofsted inspection data for around 16,000”, Morris-King said the regulator was looking into whether a provider where a child spends a “couple of days” should become registered.

“There should be further consideration given to what should be registered. It might be, for example, that we turn it on its head and say that a pupil shouldn’t be allowed to be placed in unregistered provision by their school or by their pupil referral unit – who themselves use AP – for more than two days a week if it isn’t registered,” she said.

Cases when children go to a provider for just one day a week don’t necessarily warrant inspection, but “there’s a big gap between where we are now and all the unregistered providers where pupils can go for four, and possibly five days a week if they go to two different places, and nobody inspects it”.

Lucy Allan asked why around 45 per cent of AP students “find themselves without sustained education and employment” once leaving the provision, and asked if there is “something more” the government could be doing to focus on destination “because it clearly entrenches the disadvantage that’s already been experienced”.

Gibb described the figures as “very stark”, suggesting that 37 per cent of AP students at the end of key stage four are either included in NEET statistics or have no destination measure recorded for them.

He said it was important to improve the quality of AP and share best practice in order to tackle the issue, but on the subject of raising the age limit to 18, he said it is a “power” that local authorities have, but not a “duty”. Just 49 alternative settings are currently offering provision beyond the age of 16 which he acknowledged was a “very small number compared the total”.

“I’m sure this is something we will look at in terms of the alternative provision review,” he added.

5. The government could step in if fair access panels don’t work

Powell also asked Gibb “if is not the role of government to make sure there is a system in place for when [fair access panels] don’t work well?

“If one school or a number of schools in a locality opt out of the fair access process it can disrupt the entire ecosystem and leave many children very vulnerable,” she said.

Gibb agreed that it “is an issue and we do need to address it,” and said it would be included in the review.

“And then if we need to legislate or change practice or guidance that’s what we will do.”

6. Progress 8 outliers are being ‘looked at’

Gibb does not “accept the argument” that concerns over Progress 8 scores could be to blame for the disproportionate number of SEND children being excluded from schools.

“There are issues about the outliers and those numbers and we are looking at that mathematical issue about whether one or two children in a school can distort the figures and therefore not paint an accurate picture of the progress of that school, and that is something we are looking at.”

His concerns were shared by Kevin Courtney, who warned that Progress 8 “does not value” challenging children and said there is a “real connection between a challenging intake and a poor Ofsted outcome”.