Post-16 providers have been urged to “offer greater flexibility” in admission decisions to ensure pupils who get “one or two lower grades” still get the courses they’ve been offered.

Sally Collier, Ofqual’s chief regulator, said providers could focus less on this year’s calculated results and instead place more weight on other evidence, such as speaking to the student’s school to assess their potential.

It comes after Ofqual warned last week that the a “substantial” number of pupils will have at least one grade that has been adjusted under the standardisation process, and most probably to a lower mark than teachers wanted.

The Sunday Times also reported yesterday that Oxford University will award places to pupils from poorer backgrounds even if they drop a grade or two below their offer.

Collier, in a letter to heads of centres published today, urged those with post-16 courses to “consider whether you can offer greater flexibility in your admissions decisions than you would in any other year, to allow students to progress to the courses you offer”.

If a student had missed one grade, for instance, Collier said providers “may want to consider the profile of their grades and put slightly less weight on the one or two lower grades.

“Or you may wish to consider giving slightly more weight than usual to other robust evidence in admissions decisions, for example if you already know a student and their potential well or can determine this from speaking to their previous school or college.”

She also urged flexibility for private candidates who might not have been given a calculated grade and students not given a vocational and technical qualification because there was “no way in which a valid result could be issued”.

It comes after reports Oxford University will accept top pupils from poorer-performing schools this year even if they fail to get the required grades.

Decisions on students who fail to meet an offer will be made based on factors including the candidate’s postcode and school region.

Samina Khan, director of admissions at Oxford, told The Times: “We want to be flexible with students who have had a rough ride this year … (and) will apply a degree of clemency.”

Ofqual: ‘Not true’ that teacher grades won’t be used

Ofqual has revealed that this year’s centre-assessed grades were up to 12 percentage points more generous than results achieved by pupils last year.

In anticipation of this, Ofqual had made clear its standardisation model would place more weight on the statistical expectations (such as a school’s previous results), rather than teacher grades.

Slides published from Ofqual’s annual symposium last week appear to show that the actual teacher-assessed grades do not form part of the standardisation process, instead they focus on a school’s prior results, pupils’ prior attainment and the rank order of pupils submitted by schools this year (see below). 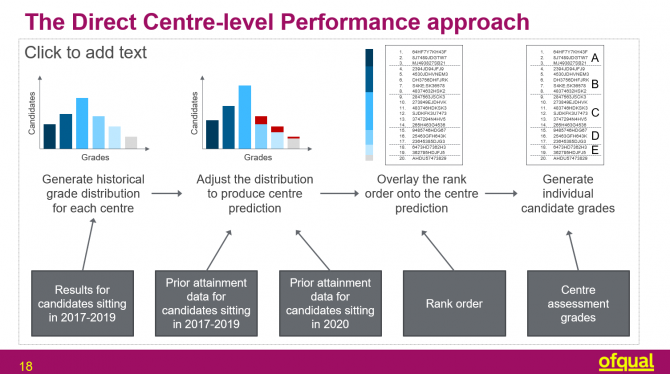 But, following reports of the omission, Ofqual said it is “not true to say the centre assessment grades are not being used – they are an important component of this year’s arrangements and have assisted centres when developing their rank orders”.

A spokesperson added: “They have been instrumental during testing to identify the fairest process, and are being used to quality assure the outputs.”

However centre-assessment grades will be the primary source of evidence to calculate grades for small schools and those without previous results, such as new free schools.

The regulator has also reiterated that centre-assessed grades and rank orders can not be shared with pupils or parents before results day to “protect the integrity of the grading process, and to avoid staff being put under pressure”.

Any “inappropriate” disclosure will be investigated as potential malpractice.

Pupils can submit a subject access request to find out their teacher grade and rank – but schools are exempt from providing this information until after results day.

Where this information is later provided, Ofqual is encouraging schools “consider what additional information and guidance is provided, so that students understand the context in which their final calculated result has been decided”.