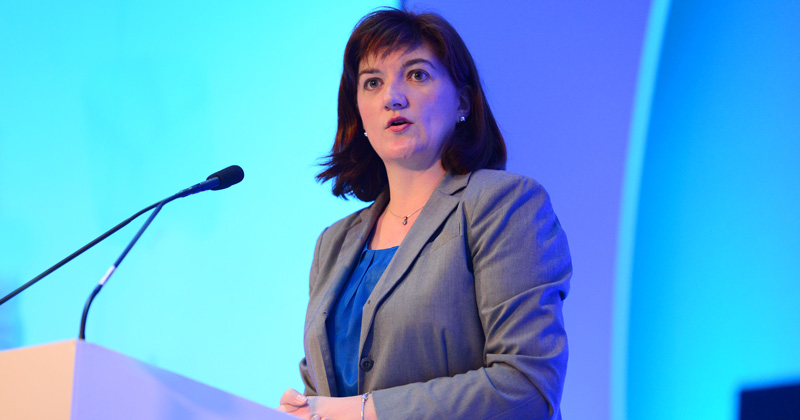 The government still expects to publish sample materials in December for key stage 2 SATs resits for year 7s, but will not start consulting schools until September at the earliest.

From 2017, pupils will resit English and maths tests in their first term of secondary school if they fail to reach an “expected standard” in year 6, a manifesto commitment made by Nicky Morgan (pictured), the education secretary, before last year’s election.

But the unannounced removal of guidance from the Department for Education’s website prompted questions about the future of the policy. It had been displayed on “useful timelines” published on the Gov.uk website until as recently as January.

Mel Muldowney, a blogger for JustMaths – which revealed the information’s disappearance – and a teacher at Alcester academy, Warwickshire, said the government needed to say when consultation would begin.

She is concerned that if it does not begin early enough, publication of the resit materials will be put back.

“Some of their consultations take months to get to the point of publishing outcomes,” she said. “This particular idea has massive implications for teachers in terms of planning and, of course, the poor students who will get subjected to more testing under the premise that they have failed.”

She was concerned about the “unprofessional”, “unsettling and very unfair” way the guidance had been removed from the government’s website without any notification.

“It’s the one place that should be up to date and the source of information and updates for the profession.”

At a Westminster Education Forum on Monday, Vanessa Pittard, the Department for Education’s assistant director for curriculum and standards, said the tests would be piloted this year after the consultation was completed.

Keith Denchfield, from the Dartford-based Leigh Academies Trust, questioned “the possibility of a test perhaps by Christmas” given that consultation would not happen until September.

Pittard reassured him that the full test would not be introduced until 2017.

When Schools Week asked the department about the disappearing guidance, it initially claimed nothing on the resits had been removed from its website.

It then declined to comment when Schools Week gave evidence of its removal, including webpages archived by the Institute of Education. A spokesperson said the government “always endeavours to give schools ample time to prepare for any new tests and our intention remains to publish sample papers in December this year.

“We are determined to ensure children are mastering the basics of numeracy and literacy and our proposals for resits of key stage 2 tests in year 7 are part of this.”