The government’s multiplication tables check (MTC) failed to tell 94 per cent of school leaders anything new about the ability of their year 4 children, a new survey has revealed.

Meanwhile, 85 per cent of school leaders said that administering the test increased their workload, with just 5 per cent saying that the additional workload was beneficial for children’s learning.

The National Association of Head Teachers (NAHT) union surveyed members who had taken part in the MTC pilot in the summer term. The test is due to become statutory for all year 4 pupils this academic year.

The results reveal that respondents felt that access arrangements for children with special educational needs and disabilities (SEND) were inefficient, with just 21 per cent of school leaders saying that children with SEND were able to access the test sufficiently to show their full knowledge.

Concerns were also raised about the six second time limit, with respondents saying that children struggled to quickly and accurately submit their answers on the computer. 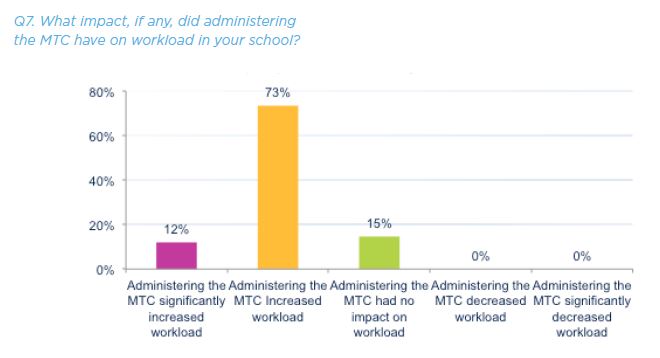 One school leader said: “The timing element is unfair on those children with some learning needs who could have scored higher with more time. Fluency in recall is one thing but fluency in recall alongside fluency in computing skills makes the test an unfair process.”

Respondents revealed concerns that the test does not accurately or properly measure proficiency in times-tables.

More IT-proficient children were able to quickly grasp the software and enter their answers, the survey found, leading to concerns that children who do not have access to computers at home might be at an unfair advantage.

Another teacher said: “It was a test of ICT skills rather than maths. Some children who knew all their times tables struggled to input the answers in time so scores were much lower than when completed on paper.”

The finding on the tests increasing workload are also worrying. They come after repeated assurances from the Department for Education (DfE) it wants to help tackle cultures that lead to excessive workload in schools.

Sarah Hannafin, NAHT senior policy advisor, said a national test is not needed “to tell teachers what they already know”.

Hannafin slammed the “enormous waste of time and effort” of the test if staff are not learning anything new about pupils.

The survey also revealed that only 22 per cent of respondents took part in the pilot without difficulty, with issues around a lack of IT hardware, internet connection problems and issues with the functionality and availability of NCA tools – the website schools use for administration of national curriculum assessments.

The checks are to “aid children’s fluency in mathematics”, according to the government.

They were first announced as part of the Conservatives’ general election manifesto in 2015, but focused on Year 6 pupils. However, in September 2017 it was announced the long-delayed check would be for Year 4 pupils.

Nick Gibb, schools minister, said: “Schools testing pupils on their times tables is nothing new – but what this will do is allow schools to understand how their pupils are doing against national and local averages and allow us to support schools to make sure that they are equipping pupils with skills they need to succeed.

“The check has been designed so that it is easy to use and accessible for both teachers and pupils. It has been extensively piloted and through this we know it is possible for entire year groups to be checked in as little as an hour.”