The government has today published further details of this year’s key stage 2 results, breaking them down by subsets such as gender and school type. Here’s your trusty Schools Week round up.

1. The gender gap is widening

Girls continue to outperform boys across all subjects at the expected standard – with the gender gap actually widening.

This year, 70 per cent of girls reached the expected standard in reading, writing and maths (combined), compared to 60 per cent of boys. 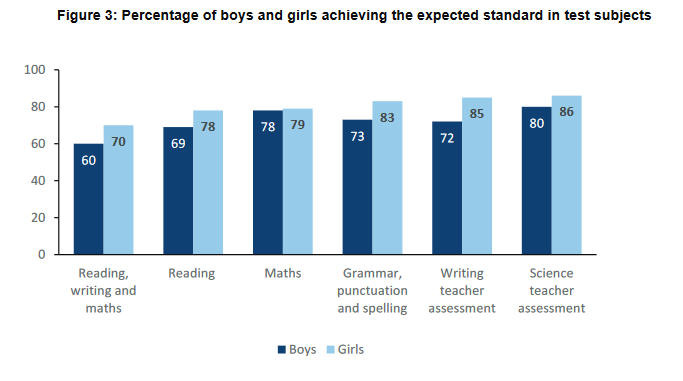 There’s some good news here: the gap between disadvantaged pupils reaching the expected standard in all of reading, writing and maths has narrowed – from 21 percentage points in 2016 to 19 this year.

The gap between pupils with special educational needs and other pupils has remained constant at 52 percentage points for the third year running.

While the gap between pupils with English as a first language reaching the expected standard in reading, writing and maths compared to other pupils has pretty much disappeared, down from 2 percentage points last year to 1 this year (it was 4pp in 2017).

First of all: it’s important to point out it’s hard to draw any proper conclusions from the tables breaking down results across different school types.

The headline figures show converter academies (normally good schools that choose to convert)  led the way with 67 per cent of their pupils achieving the expected standard in reading, writing and maths.

The differences aren’t that surprising – for instance we’d expect the percentages for sponsored academies to be lower as these are typically failing schools that have been forced to convert.

Whereas the figures for LA schools are also skewed by the number of schools they lose to academisation (if more failing schools with lower results become sponsored academies, this will lead to an increase in the LA’s overall results for its remaining schools).

But the DfE does like to point out that academies that have been open the longest have the highest attainment.

For instance, in 2019, sponsored academies open for one academic year had 54 per cent of pupils achieving expected standard. This rose to 61 per cent for those open for eight or more years. All good so far.

But there’s some weird patterns across the years – results seem to rise slowly up through the early years after conversion until an academy has been open five years, then we see a drop in both year six and year seven.

So, if we look at sponsored academies open for seven academic years, 55 per cent of their pupils got the expected standard – just one percentage point above those open for one year. Not as rosy as the government would make out. 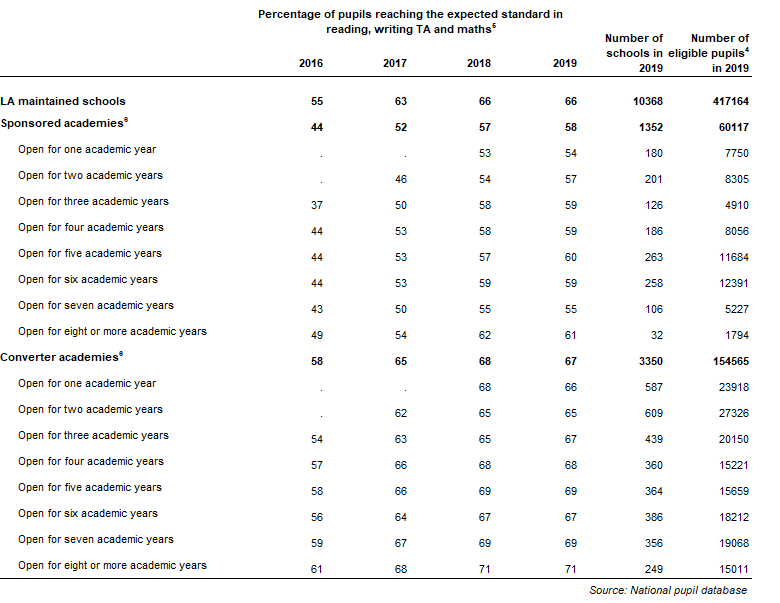