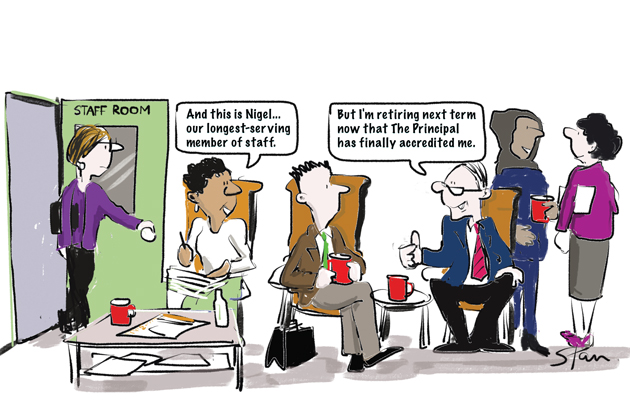 New teachers could be fully accredited within a few months if the government follows through its plan to scrap current training qualifications.

Under the plans, set out in last week’s white paper, trainee teachers would gain accreditation at their headteacher’s behest, a decision that would be ratified by a teaching school or school-centred initial teacher training provider.

A Department for Education (DfE) spokesperson said there would be no set time for accreditation: a “very small” minority could qualify in just “six months”.

Replacing qualified teaching status (QTS) in an increasingly academised system, as set out in the white paper and Budget, would shake up pay for trainees as academies can set their own pay conditions.

The DfE said some could give trainees annual pay increments, while others might give salary increases only after a teacher had been accredited, no matter how long that took.

Professor Alan Smithers, a teacher training policy expert from the University of Buckingham, said: “Qualifying as a teacher has mainly been a matter of serving the time, so I welcome the government’s attempt to beef it up. The new approach has been likened to learning to drive.

“But I wonder where the independent assessment of capabilities comes in. Ofsted has had to cope with a slashed budget and it is inspecting much less these days, so I can’t see it taking it on.

“Without independent oversight, trainees and their future careers will be at the mercy of the personal preferences of one or two senior teachers during their first years in schools. So, in principle, a good idea, but how can we be sure it is going to be fair?”

The title of QTS will be changed and trainees will be “accredited” rather than “qualified”, although a DfE spokesperson said the new name would be announced in “due course”.

The white paper said: “We will introduce a more challenging accreditation, recognising the ability to teach well, advanced subject knowledge and understanding, and application of up-to-date evidence.”

As part of its training shake-up, the government also promised to give the “best” training providers long-term allocations of places, so they could plan staffing. Schools Week previously reported that 80 per cent of training providers said uncertainty over numbers meant they were reconsidering the courses they could offer.

However, the DfE told Schools Week the definition of “best” was still to be decided. It also confirmed the changes could take place in time for the 2017/18 round of recruitment.

James Noble-Rogers, executive director of the Universities Council for the Education of Teachers, gave the proposal a cautious welcome, but said: “There is also a case for increasing the amount of time that it takes to become a fully recognised teacher – much will, however, depend on the detail.”

Schools Week last week reported the concerns of universities about the current system that does not guarantee how many places each university-led PGCE course will have for the start of the 2016/17 academic year. Universities were unanimous that the system had negatively affected their ability to provide provision.