Schools with challenging intakes are still disadvantaged under Ofsted’s new framework, suggests an analysis of the first inspections.

Although the sample size is small – it looks at the first 36 inspections – the findings seem to challenge assurances from Ofsted that its new framework would level the playing field.

This grading of schools nonsense that we’ve got is really just grading their intakes. It’s saying nothing about school effectiveness

Amanda Spielman (pictured), the chief inspector, admitted last year that the old framework made it “harder to get a good or outstanding grade if your test scores are low” as a result of a “challenging or deprived intake”.

She insisted the new framework would “reward schools in challenging circumstances that are raising standards through strong curricula”.

But the new study found inspected schools with the highest prior attainment intakes were twice as likely to be rated ‘good’ as those with the lowest.

Gary May, the vice-principal at Dover Christ Church Academy, Kent, who carried out the analysis, said it showed a “clear disparity in outcome” when comparing schools at the top and bottom end of disability and advantage.

Ofsted said it would not comment on “small sample data sets” before next month’s publication of its first management information under the new framework. 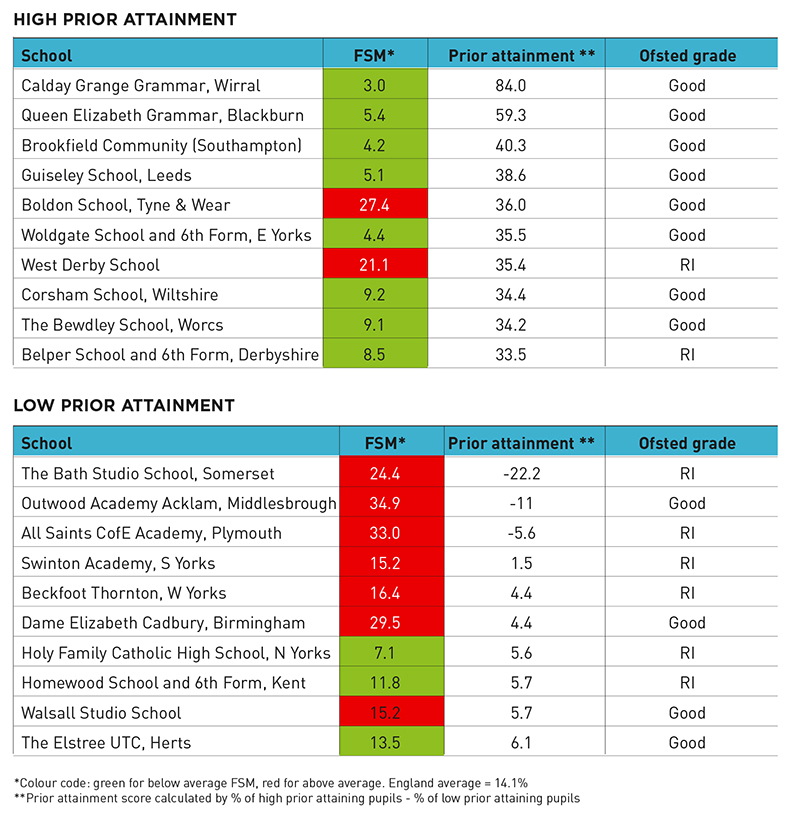 The analysis found of the ten schools ranked highest on prior attainment, eight were rated ‘good’ under the new framework and two ‘requires improvement’. Eight had fewer students on free school meals than the national average, and two had above average.

Of the ten schools ranked lowest on prior attainment, just four were rated ‘good’ while six were ‘requires improvement’. Seven had more pupils receiving free school meals than the national average, and just three had below average numbers.

However, there is less disparity when focusing just on free school meals. Of the ten schools with the highest levels of free school meals, half were rated ‘good’ and half ‘requires improvement’.

Although this is still a bigger gap than those with the lowest levels – where two were ‘requires improvement’ and eight were ‘good’ – the difference is less stark.

May added: “I believe Ofsted is trying to improve things and there may be some green shoots visible in the dataset as a whole. Future data will make that clearer.

“What is clear, however, is that there is a disparity at the extremes and more work needs to be done in reflectively applying the new framework in these settings.”

However, there were questions over how the results would translate in real inspections.

In the study, inspectors ran detailed checks based on 25 curriculum indicators. For real inspections, introduced in September, these were boiled down and divided between the two key areas of “intent” and “implementation”.

Stephen Tierney, chair of the Headteachers’ Roundtable, said there were “no surprises” in the new analysis, and warned that it was “new framework, same old Ofsted”.

“This grading of schools nonsense that we’ve got is really just grading their intakes. It’s saying nothing about school effectiveness.”