Only around 6,400 unqualified teachers will be eligible for a pay rise this year, the government has predicted.

The Department for Education has set out its evidence to the School Teachers Review Body, which makes recommendations on teacher pay.

It comes after the government announced last year that public sector workers earning over £24,000 would see their pay frozen this year. Those earning below the threshold will get a rise of at least £250.

Here are the key findings from the DfE’s evidence document.

The report estimates that around 5,200 full time equivalent unqualified teachers may be eligible for the award.

But it also gives examples of how adjustments can be calculated for differentiated London pay ranges, which could then increase the estimated number of unqualified teachers receiving the award to 6,400.

2. £2.2m cost to schools, to be met from existing budgets

Giving all 6,400 teachers a pay rise of £250 would cost £1.6 million on its own, but the total increase once on-costs such as National Insurance and pension contributions would be around £2.2 million, the DfE said.

However, the DfE has also claimed this will be “affordable from current school budgets, which are increasing by £2.2 billion in 2021-22 compared to 2020-21”.

The burden is also “split across phases broadly proportionally”, the department said. 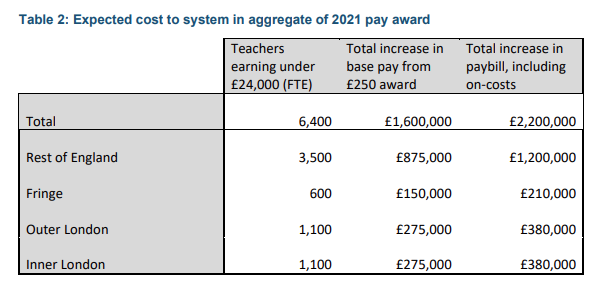 3. One in three unqualified teachers paid below £24k…

Teacher pay scales for the current year show that unqualified teachers’ pay scales range from a minimum of £18,169 outside London to a maximum of £33,410 in inner-London.

However, the DfE said that there were six “unofficial” pay points in the unqualified teachers’ pay range, as published by unions.

According to the department, only around one-third of unqualified teachers are paid below the fourth unofficial pay point – worth £24,507 this year.

This explains why only a “relatively small” share of unqualified teachers will be eligible for the £250.

4. …but four in ten are paid above the range

The DfE said this may be due to academies, which set their own pay, using those freedoms to pay salaries above the recommended ranges, while others may be using allowance payments that cause the gross pay to be above the base pay maximum.

The department said there may also be teachers who are misreported as unqualified. It said it would investigate further before the next school workforce census publication in June 2021. 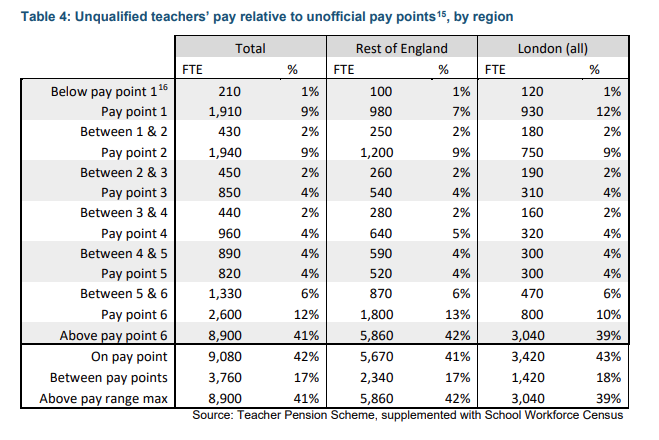 5. ‘Incredibly rare’ for qualified teachers to be paid below £25k

However, academies are allowed to pay their teachers below this level.

But the DfE said this is “incredibly rare” and accounts for only 0.2 per cent of qualified teachers in academies.

“In many cases, these are likely to be data errors and do not necessarily place the teacher below the £24,000 threshold,” the department added.

“And these teachers are not covered by the school teachers pay and conditions document, so academies will be able to make their own decisions about how to uplift pay for any qualified teachers who do earn under £24,000 currently.”

The Covid-19 pandemic and ensuing financial crisis has caused a boom in teacher recruitment, with the number of people starting initial teacher training courses in England increasing by 23 per cent last year.

However, the DfE has previously admitted it expects the boost in teacher recruitment prompted by the pandemic to be short-lived, despite having slashed incentives.

In its STRB evidence, the department again warned the increase is expected to be a “short term gain” based on the trajectories of previous recessions.

The report also warns that the country continues to see “significant gaps remaining in key subjects, despite the uplift in recruitment”.

“The supply context remains challenging, particularly in secondary schools where pupils numbers are projected to grow by 15 per cent between 2018 and 2025.”