Just 1 in 6 pupils who leave schools via so-called “managed moves” go on to pass their English and maths GCSEs, according to new analysis.

However, pupils moved in this way are still almost three times more likely to achieve a grade 4 or above in those subjects than those who are permanently excluded.

The analysis found 17 per cent of pupils who appeared to have left their school roll as a result of a managed move went on to achieve at least a grade 4 in both GCSE English and maths.

This is well below the national average of 64 per cent, but higher than the achievement rate for permanently excluded pupils, which is 6 per cent. 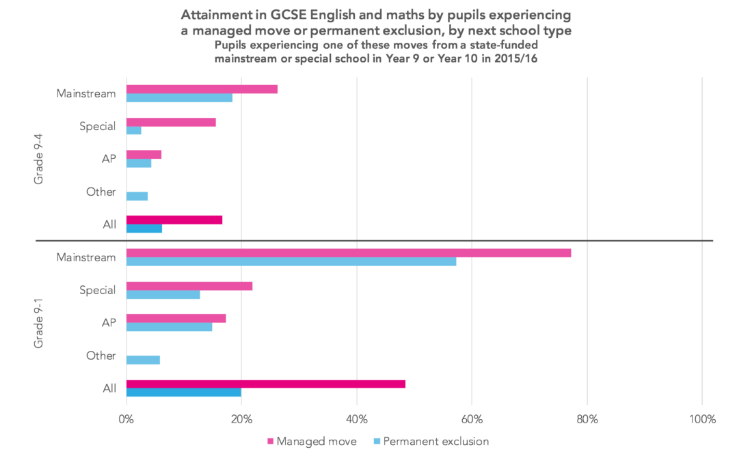 The use of managed moves and other forms of pupil movement has been thrust into the spotlight recently, as the government and Ofsted have sought to clamp down on the practice of illegal off-rolling.

According to Ofsted, managed moves do not constitute off-rolling as long as long as they are “used in pupils’ best interests, with the agreement of everyone involved within the statutory guidance”.

But the government has been warned that some schools are forcing parents to accept managed moves under the threat of an official exclusion.

Unlike permanent exclusions, figures for the number managed moves are not centrally collected.

But Dave Thomson, chief statistician at Datalab, said he was able to use “conservative estimates” to identify just over 5,000 year 9 and 10 pupils in the national pupil database who appeared to have been relocated through a managed move in the 2015-16 academic year.

He then compared their performance and characteristics to the 3,100 pupils of the same age who were recorded as having been permanently excluded that year.

“Overall, it looks like key stage 4 outcomes for pupils who go through a managed move are poor but might tend to be slightly better than for pupils who are permanently excluded,” said Thomson.

The research found some similarities between the characteristics of pupils subject to managed moves and those permanently excluded.

For example, pupils eligible for free school meals, with special educational needs and those with low prior attainment or persistent absence were all far more likely than other pupils to be subject to either a managed move or permanent exclusion. This is also the case for black Caribbean pupils. 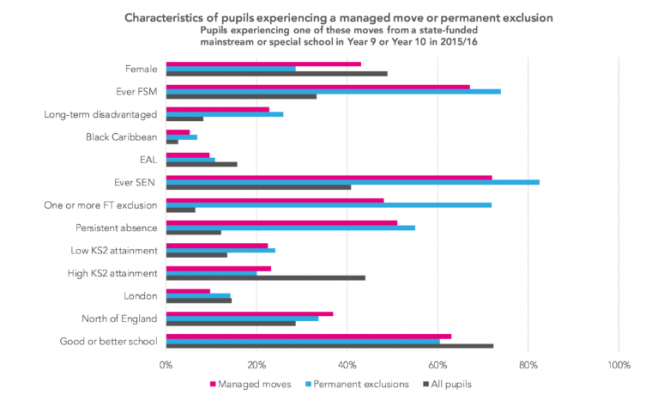 However, for some characteristics, there were substantial differences.

For example, there were “proportionately more” girls in the managed move group than the permanent exclusion group.

Pupils who left schools via managed moves are also more likely to go on to attend mainstream schools, while those permanently excluded were more likely to be placed in alternative provision. 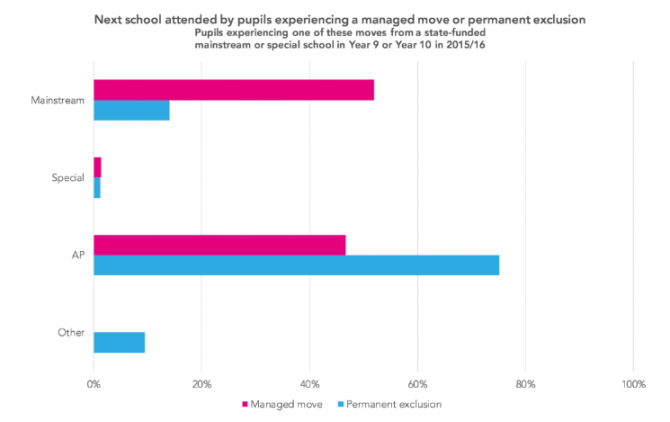 Earlier this year, the government pledged to provide clear guidance on managed moves to ensure they are being used properly, after the landmark Timpson review into exclusions found parents and carers had been “pressured into agreeing a managed move” under the threat of an exclusion.

Timpson also found examples where children “have experienced a number of unsuccessful and uncoordinated managed moves”.