The government’s long-awaited review of exclusions has finally been published today.

The Timpson review, carried out by former children’s minister Edward Timpson, was supposed to be published last year but has been heavily delayed.

The review made 30 recommendations for the government to consider, and the education secretary Damian Hinds has confirmed he accepts them all “in principle”.

Schools Week pulled out some of the most interesting findings from the report itself.

Timpson described informal exclusion and off-rolling as “quite simply wrong”, and warned pupils moved in this way miss out on the support they would receive via the formal exclusions process.

However, he also warned that tackling these “rare but unacceptable” practices could result in a rise in formal exclusion, “as they would no longer be hidden from scrutiny and due process”.

“Putting all formal exclusions that have gone through the proper processes above the table in this way should be seen as positive progress.”

Timpson also warned of a rush that applying greater scrutiny to decisions about a child leaving school and bearing down on inappropriate practice “may cause problems elsewhere in the system” – specifically issues with schools avoiding taking children with a history of poor behaviour.

In making the changes recommended in the review, Timpson said it is “imperative” the DfE “considers and mitigates any risks, such as abuse of the admissions framework, where schools could seek to avoid taking on children in the first place”.

2. Gypsy, Roma, Traveller and SEND pupils most likely to be excluded

Timpson’s report includes some interesting new analysis on the pupils who are most likely to be excluded from schools in England.

Traveller children of Irish heritage had the highest rate of permanent exclusion, followed by Gypsy and Roma children. Those receiving SEN support were also more likely to be excluded, as were Black Caribbean pupils and those claiming free school meals.

Pupils of Indian, Bangladeshi and other Asian backgrounds were the least likely to be excluded, while boys had an exclusion rate more than three times higher than that of girls. 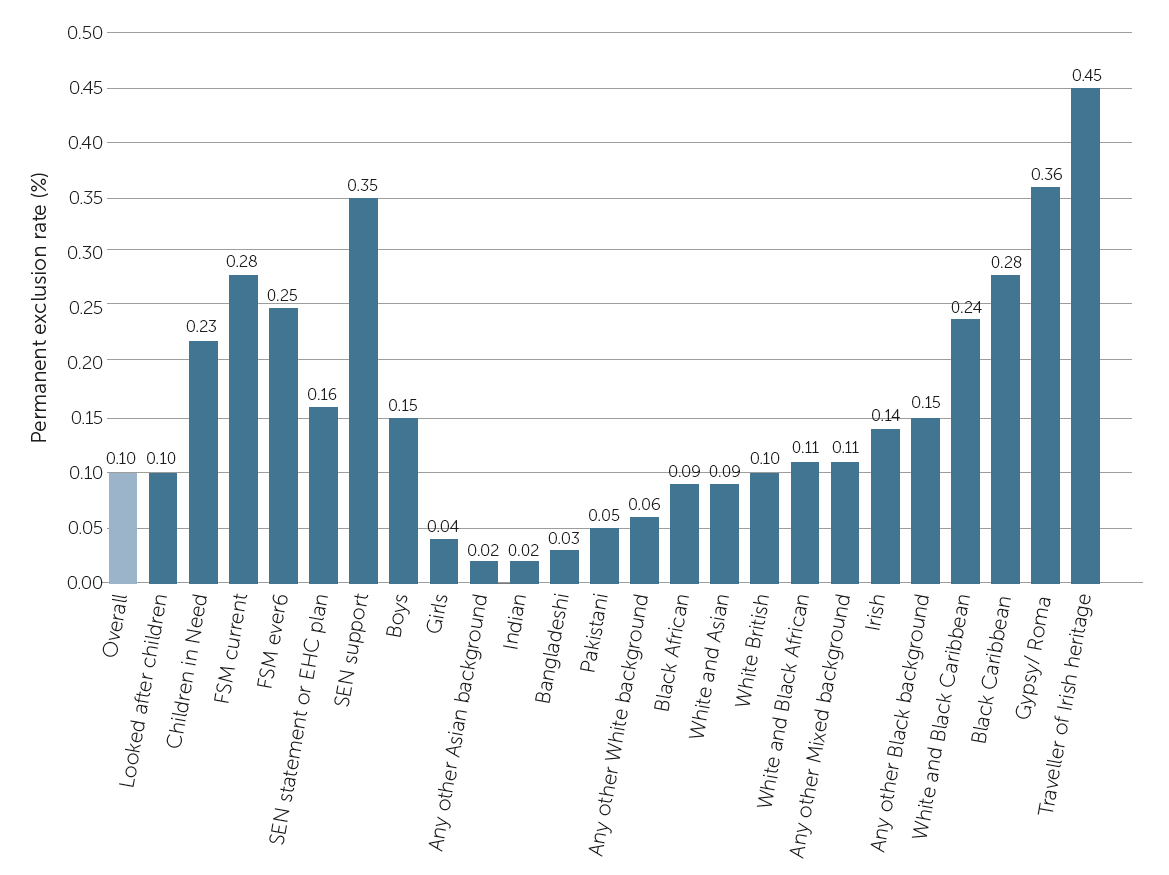 3. ‘Minority’ of schools cause problems for the rest

The review found that most schools took a “balanced and measured approach” to seeking alternatives and using exclusion “only where these had failed”.

But Timpson also pointed to “frustration” among staff in schools that had adopted a balanced approach, who felt a “small minority of their peers in other schools did not”.

“This resulted in them admitting children from other schools who they perceived had been excluded when it was not proportionate, or even children who had been off-rolled from other schools. One school leader even admitted off-rolling had happened in his own school.”

The review found that just 47 secondary schools, equivalent to 0.2 per cent of all schools, issued more than 10 permanent exclusions in the same year.

Timpson, who grew up in a family which fostered almost 90 children, warned that schools face a “particular challenge in recognising, understanding and meeting the needs of children in, or on the edge of, the care system”.

“A child who is distressed, angry, confused, lacking confidence and trust in others is a child that needs help. I have seen, on so many occasions, that without it, their behaviour and response to poorly understood interventions will only get worse,” he said, adding that it is “important for schools to understand this context”.

Schools must “act immediately”, Timpson said, or risk failing to adequately meet the needs of looked-after children, and pointed to research from the DfE which highlights the value of “inclusive whole school approaches to day-to-day adjustments and targeted specialist interventions”.

Analysis by Timpson’s team found boys are “substantially” more likely to be excluded in primary school than girls.

Timpson points out that although exclusion in primary school is rare, the statistics “suggest we may be missing opportunities to divert primary-age boys away from a pathway to exclusion”.

As part of the review, Timpson “heard and looked carefully at the contention that academy schools are misusing exclusion, either by excluding too readily or to improve their results”.

But his report did not find that any particular type of school have been using exclusion strategically to improve results. In fact, the review found that the type of school a child attends “will not, in itself, determine how well exclusion is used but there are schools of all types that can use exclusion to better effect”. 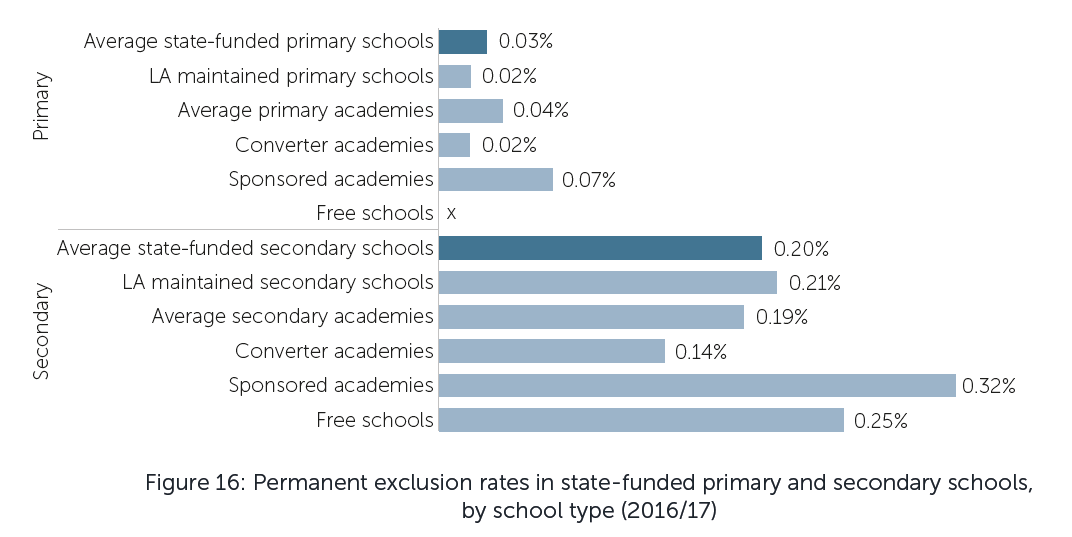 He also reveals that a forthcoming study, autonomous schools and strategic pupil exclusion, will confirm that while sponsored and converter academies are more likely to permanently exclude pupils compared to similar LA-maintained, schools “they did not improve their GCSE results because of this”.

The study found that the higher rate of exclusion, particularly in pre-2010 academies, “is very likely to reflect the more prominent behavioural challenges faced in these schools”.

Persistent disruptive behaviour accounts for around a third of all suspensions and permanent exclusions, and Timpson said it “should not be tolerated in any school”.

However, he raised concerns about suspensions after his review found evidence of cases “where the same children were being excluded for multiple fixed periods”.

In 2016-17, 95 pupils were excluded for 45 days in a single year, and 80 children were unlawfully excluded for more than 45 days of fixed period exclusion, the review found.

8. A ‘small number’ of schools are off-rolling for their own interests

Timpson has found “credible evidence” that a “small number” of schools are off-rolling children for their own benefit, the report states.

On this, the former minister is unequivocal.

“This is not exclusion; it is where children are told or made to leave their school without the proper process being followed.”

Parents and carers told Timpson that schools applied pressure on them to move their child to another school or to home educate, under the threat of permanent exclusion.

“Schools, LAs and others were also often aware of this practice, though instances are difficult to identify and tackle,” he said.

Timpson also warned of cases where parents and carers have been “pressured into agreeing a managed move” under the threat of an exclusion, and others where children “have experienced a number of unsuccessful and uncoordinated managed moves”.

Poorly used managed moves have been described as a “shunting game”, he said, with the underlying policy “allowing deficient practice by default”.

Schools are even sometimes using “what appear to be pro-forma letters from head teachers to parents and carers” to encourage pupil moves.

The Timpson review highlights that alternative provision provides education to some of the most vulnerable. Forty per cent of AP pupils, for example, are claiming free school meals, 26 per cent are considered “in need” and almost 80 per cent have special educational needs or disabilities.

But the former minister has raised concerns about the quality of the sector, described to him during the review as the “underbelly” of the education system.

“Although much AP is excellent, too often children in these settings do not do as well, academically, as their peers. Overall, the quality is too unreliable and outcomes are poor.”