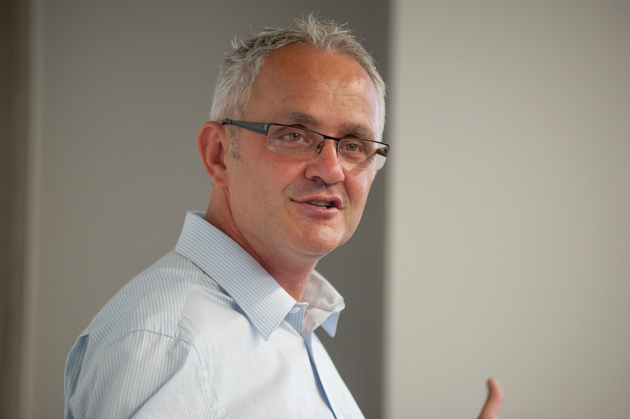 Leading headteacher John Tomsett has admitted having a sexual relationship with a former pupil, but denied unprofessional conduct.

A teacher conduct panel today heard how Tomsett and the girl, known as Pupil A, had a series of sexual encounters at local beauty spots after Tomsett had left Eastbourne Sixth Form College and the girl had finished her A-levels.

The sexual relationship, which the panel heard did not include full sexual intercourse, began in July 1992.

Giving evidence the pupil, now in her mid 40s, said English teacher Tomsett kissed her in the classroom on his final day teaching at the school in May, and wrote in her diary at that time that it was “very professional” of him to wait until his last day.

Tomsett, who is almost 10 years older than the former pupil, was married at the time.

In a letter the pupil wrote in 1995 – with the intention to open it on her 40th birthday in 2014 – she described their summer together as being full of “passion” and “romance”.

Barrister Andrew Faux, representing Tomsett, said his client denied he had an inappropriate relationship with Pupil A while still a teacher at the college, but accepted a sexual relationship began in the summer after he had stopped being her teacher.

However he denied this amounted to unacceptable professional conduct or conduct that may bring the profession into disrepute.

Faux said: “The central issue which remains in dispute is whether Mr Tomsett acted in a way to encourage or reciprocate flirtatious behaviour from Pupil A while he was her teacher.

“Part of the evidence from Pupil A relates to the long term effect of how she says that relationship was formed. Mr Tomsett is very clear that although a relationship did form after he stopped teaching at the school, it was between people of equal status and there was nothing improper in his conduct towards her while she was a pupil at the school.”

Giving evidence, Pupil A described her difficult homelife when she began at the sixth form college in September 1990, and said receiving attention from Tomsett made her feel “special”.

She said Tomsett was “very intense and had a wonderful way with words and language and was quite beguiling”, which he demonstrated in a four paragraph letter he wrote in her ‘leaving book’ towards the end of her final year.

She alleges that Tomsett kissed her in the classroom on his final day at teaching the school, and wrote in her diary at the time that it was “very professional” of him to wait until his last day.

She described her teenage self as “naïve” and not having had a “proper boyfriend”, and said it was “nice to think that someone cared for me”. She said she wanted Tomsett to think she was “a grown up” and she “admired” him and found him “inspiring” as a teacher.

She said she believed Tomsett had wanted to tell her that he loved her on his last day, after he told her: “There are so many things I have wanted to say to you but either couldn’t or shouldn’t.”

However, she said the kiss left her feeling “ashamed and guilty, and that hasn’t ever gone away”, and she eventually ended the relationship at the end of the summer of 1992.

Despite this, in a letter she wrote in 1995 she described their summer together as being full of “passion” and “romance”, and said she and Tomsett were still seeing each other.

Faux said between 1997 and 2004 the pair had no contact with each other, but in 2004 she turned up at his school in Pickering because she was keen to see him.

They met twice in 2011, once in June and once in November, and had sexual intercourse both times. But in an email exchange in May 2012, Tomsett reiterated that he was not prepared to leave his wife when Pupil A declared her ongoing love for him.

A statement from Tomsett, read out in part by Faux, said that he had grown to learn that any relationship between a teacher and a student is “essentially exploitative” and “wrong”.

However, he said that at the time he began his relationship with Pupil A, “it didn’t feel like anything but a relationship between two consenting adults” and he was “deeply hurt” when she ended it in 1992.

Tomsett said it had “become clear” to him, after 30 years as a teacher and 15 as a headteacher, that his relationship with Pupil A was “unbalanced”.

Tomsett is a founding member of the influential Headteacher’s Roundtable, and is currently headteacher of Huntington School in York.

The school, which was visited by education secretary Damian Hinds in July, was one of the first five schools to be selected as a research school in October 2016.

The hearing, which is expected to last until Friday, continues.