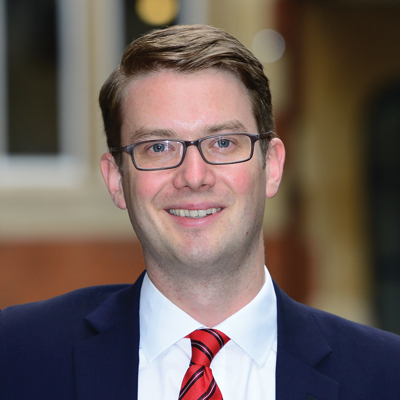 James Townsend is the very model of a modern religious millennial.

White, male, under-30, posh-sounding with a fancy job title, he has the stereotypical trappings of privilege and the wide-eyed enthusiasm of youth.

He also hates being portrayed like this. He calls it the “That Guy” problem. “I just detest being that guy  . . . the sort of white middle-class person who is always taking the stage and doing stuff.”

In his defence, however, his zeal for life and ability to talk about religion in a non-preachy way has made him the only person in the past decade who has made me wish I were religious – or at least, has made working at a religious school sound genuinely appealing.

We meet at Church House, the Church of England’s offices directly opposite the Department for Education. For those who believe the church’s influence in education is too great, the location could raise eyebrows – but the place opened in 1940, years before the government created an education department. In English history, it is not so much the church that encroached on the government’s plan for education as the other way round.

Townsend introduces me to everyone in his team before marching me to a bust of his hero, Joshua Watson, the wine merchant who in 1811 created the National Society for the Education of the Poor and who made a commitment to open a school in every one of England’s 19,000 parishes serving all classes: rich or poor. Some 60 years later, the government caught up and tried muscling in on the act. Schools, church and government have been enmeshed since.

Townsend is driven by the same sense of possibility that Watson saw 200 years ago. For him, the 4,700 schools overseen by the Church of England and the one million children educated in them each day are a legacy to be proud of. But he wants them to do more.

“When I was first thinking about a project I thought ‘I know, let’s do an initial teacher education programme across the church! It’s going to be great. We’ve got 135,000 teachers in our schools so we must! No brainer!’

“And then, when we started looking, we thought, ‘Actually, the challenge here is to make sure that the schools are being properly led in line with our vision in a way that is dynamic and sustainable’.”

Like all schools, there is an issue of recruitment. Recent figures estimate that about 22,000 school leaders will be needed by 2022, and while finding them in cities such as London might be easy, the rural villages often served by church schools are struggling.
Furthermore, Townsend doesn’t believe that the church should store up its resources and only use those to serve people already in on the act. He passionately believes in reaching beyond its faith borders.

But how to make church school leadership attractive in an increasingly secular society?

“We think of it as a vision,” Townsend says, eyes twinkling, as we turn to a document the foundation has produced to promote its new leadership development programme, the Church of England Professional Qualification for Headteachers, as well as other programmes that schools signed up to the foundation can use.

The vision lays out principles on which the schools work. But, to me, it’s not religious. It looks like a protestant work ethic, but without the God.

Whether or not you’re a church school, if this sets you on fire, if this is what you want for kids in your school, we want to help

Townsend grimaces when I say this. He has another take: “What the vision does for us is say, ‘This is the kind of education that we think people want, need, that we want to offer them, and whether or not you’re a church school, if this sets you on fire, if this is what you want for kids in your school, we want to help’.”

The programme is also supported by a variety of conferences that get leaders in church schools to work together, plus an online platform designed to help the many rural schools in the group.

“Some of our schools are two-form. Not two-form entry, just two forms. Taking somebody out for an afternoon of CPD is really problematic, and you’re probably a good two hours away from where the CPD is, so it’s going to be a whole day.” Building a digital platform, he says, helps get around the problem.

Given the amount of money major academy trusts are now throwing at marketing, promotion and leadership development, it is unsurprising that the church is fighting back. A developing trend in the new world of multi-academy trusts is a need to differentiate the employee offer and show why teachers should work for you rather than others.

But with the Church of England, this sort of approach leaves it facing criticism that it is encroaching on secular schools – especially as they are able to sign up to the vision and package of support.

“There are safeguards both ways on that . . . that’s not our style, that’s not our way. Joshua Watson didn’t have that approach! The key to how Anglicanism thrives is be able to take on different points of view and make an asset out of diversity.”

Indeed, an oddity of the Church of England is that it doesn’t consider its schools to be “faith schools”, it considers them “church schools” – that is, schools overseen by the church rather than being about one faith. Hence, a church school in Manchester has a Jewish head serving a 90 per cent Muslim pupil body. James Townsend with a bust of Joshua Watson

“It isn’t creating a sort of muddy compromise where everyone loses their identity. It’s building a confident space that says, ‘Yes, we take faith seriously here and we want you to thrive’,” he explains.

Townsend’s own interest in religion developed as a teenager. Raised on a farm in Painswick, Gloucestershire, his parents were not particularly religious. But having got his hands on The Church Times he asked his grandmother for a subscription as a present.

He thought of it as “countercultural dialogue”, different to the mainstream media that focused on economics and global affairs, and instead looked at small acts of kindness and the way local communities worked together.

After attending Croft School in Painswick, Hopelands in Stonehouse, and Dean Close in Cheltenham, he studied history at York University, before deciding to join the TeachFirst programme in 2009.

Sent to teach in Stalybridge, Manchester, he worked at Copley School, now Copley Academy, as it transitioned under a new headteacher, Matt Jennings.

“He was a great guy, and very supportive. He was going out, looking people in the eye and saying: ‘What do I need to give you in order to thrive?’

“And if you look at the foundation here, and I am the director of this thing, and, well, what do I know about school leadership? Very little! But, ultimately, it’s the same conversation. I’m going out to our teachers and saying: ‘What do you need to thrive? It’s my job to ensure that you have that.’ That’s how you transform the education sector.”

He admits that he didn’t think education was where he would end up. At one point during his degree he thought about law; at another, consulting; at several, going into politics.

But in the five years since he left teaching, first to become participant president of Teach First and then in various policy roles at the Church of England, he changed his mind.

“Who are the people building the new Jerusalem? It’s teachers, doctors, nurses, doing fantastic stuff. And so I think my teenage excitement with the world of Westminster has shifted into a slightly more grounded approach to how we change.”

He laughs gently. “I really don’t want to be That Guy,” he says, “but I think I probably am.”

May 2016 – present Director,  The Church of England Foundation for Educational Leadership