Blameless school staff were left in limbo and fearing for their jobs for months as a result of unclear “disqualification by association” rules, a Schools Week investigation has found.

Previously unseen data has today laid bare the extent of the misery caused by rules which disqualified teachers, heads, support staff and volunteers from working in schools, simply because they lived with someone with a criminal record.

The rules left dozens of school staff waiting for months to hear whether they could keep working in schools, while some faced waits of over a year for an answer.

Blameless staff had their lives turned upside down

In many cases, these public servants were suspended while they faced investigation for crimes they had nothing to do with.

Introduced in 2014, the rules require anyone working with young children to Ofsted for a disqualification waiver if they lived with anyone who had a spent conviction.

Unclear guidance and poor communication with schools was blamed for a deluge of applications, more than half of which were unnecessary because the nature of the offence, or the role held by the applicant, meant a waiver wasn’t needed.

Last month, the government announced that as of September the rules will no longer apply to schools, but unions and campaigners say the damage has already been done after long waits for waivers from Ofsted were revealed.

Data obtained by Schools Week shows that between September 2014 and April of this year, Ofsted received 1,679 waiver applications from school staff.

Though 1,201 applications, a large majority of those received, were dealt with within a month, hundreds of school staff were forced to wait for months or even years to hear whether they had permission to work.

While 319 staff waited between one and three months for a response, 92 did not receive a response for three to six months. Thirty five applicants had to wait between six months and a year, and it took between one and two years to process applications from seven people. 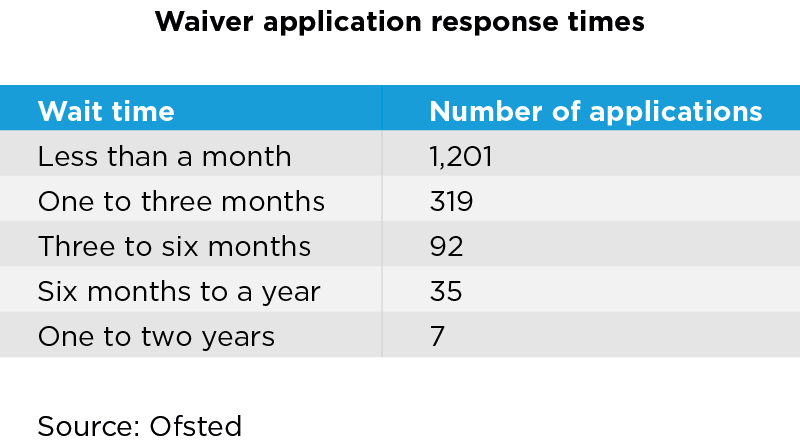 Angela Rayner, the shadow education secretary, said it was “deeply unfair” that teachers, support staff and head teachers “who had done nothing wrong were suspended from work for so long through no fault of their own”.

“Ministers allowed this to happen at the same time as the workforce has reached crisis point on their watch, a crisis which these failings have only worsened. The government owes an apology to those affected and assurances to all of us that the system will work properly in future.”

An Ofsted spokesperson said the change to the rules in 2014 had led to a “large influx in applications”.

“As a result processing some applications took longer than normal,” she said.

“While we process all applications as quickly as possible, we must also investigate each application thoroughly before making a decision to grant a waiver. This can often take time, particularly in more serious or complex cases.”

Impact on support staff is ‘evidence of bias’

Data obtained by Schools Week also reveals that school support staff were worst affected by the rules. Of the 1,679 applications from school staff between September 2014 and April 2018, 676 were from teaching assistants, 284 were from lunchtime and kitchen staff and 71 were from other support workers.

Waiver applications were also received from 54 people working in school nurseries, 41 members of school office staff, 41 people who operate before or after-school clubs, and 34 school cleaners, caretakers and maintenance staff. 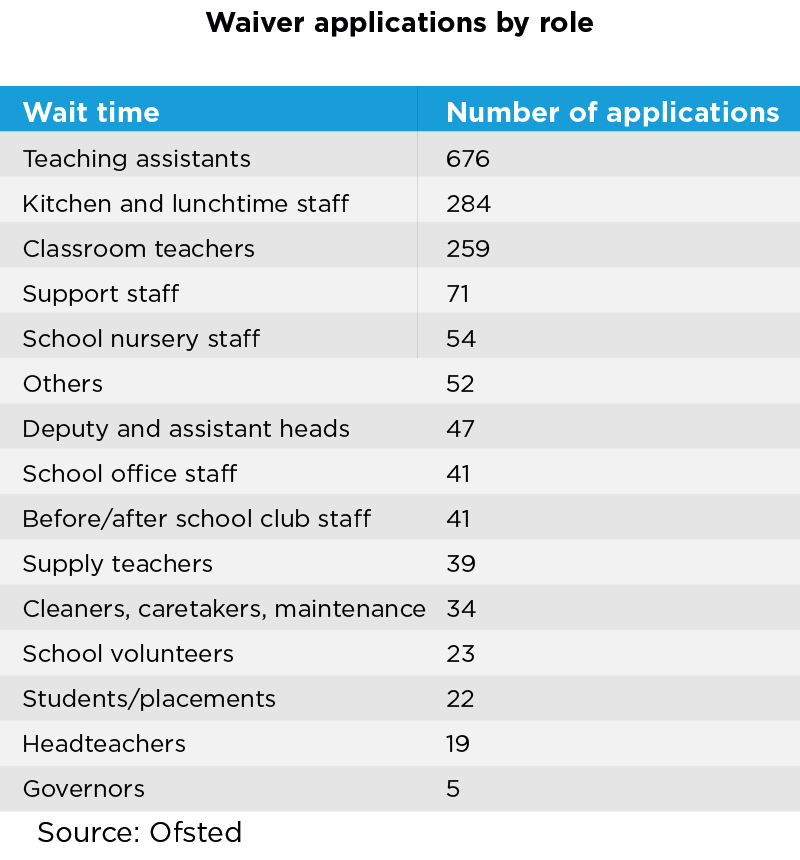 “Blameless staff had their lives turned upside down and in some cases forced to put their lives on hold  for months and years before Ofsted sorted out their cases.

“That so many staff were wrongly referred showed that the it was a communications disaster. And once more it is support staff who have borne the brunt, the disproportionate number of teaching assistants and lunchtime staff referred is further evidence of bias in the system.”

Teachers were the second worst-affected group. The data shows that 259 applications were from class teachers and 39 were from supply teachers.

Leaders were also affected, including 47 deputy and assistant heads and 19 headteachers.

But it wasn’t just paid school staff who were forced to apply for a right to keep working in schools. Ofsted data shows that applications were received from 23 school volunteers, five governors and even 22 students or others on placements in schools.

A Department for Education spokesperson said the disqualification arrangements had now been changed, “following intensive consultation with childcare providers, unions and experts who were clear the current system was unfair due to individuals being prevented from working in early years whilst waivers were being granted”.