More than 1,600 schools have been offered improvement support by the government after ministers changed how they intervene in failing schools.

Damian Hinds, the education secretary, announced last year that the government would no longer intervene in schools deemed to be ‘coasting’.

Instead, new triggers for “offers of support” from the government were drawn up, and the government has today released the number of schools affected.

Of those schools eligible, 1,036 are primary schools, 500 are secondaries, 80 are special, alternative provision schools or pupil referral units, 33 are all-through or post-16 institutions and eight are nurseries.

Of the eligible schools, 856 are local authority-maintained, 744 are academies and 57 are free schools.

Take-up of the offer of help was highest among LA-maintained schools, at 81 per cent, followed by academies on 80 per cent. Just 60 per cent of eligible free schools took up the offer.

“A take-up rate of 100 per cent would not be expected for the 2018-19 school improvement offer, because take-up is optional,” the DfE said in its guidance.

“There are several reasons that a school might turn down the offer, including already being given sufficient school improvement support or a change in circumstances (e.g. Ofsted rating) since being offered support.”

Guidance published last year reveals that primary schools were to be eligible for support if they were defined as being “below the floor standards or coasting based on KS2 revised data published in December 2018”.

Secondary schools defined as “below the floor standards or coasting based on KS4 revised data published in January 2019” were also eligible.

Schools that are not below the floor or coasting standards, but that are rated ‘requires improvement’ were also eligible.

Today’s data release explains that there are two tiers of support offered. Tier one gives schools up to three days’ free advice from a designated national leader of education or equivalent expert.

Tier two schools get the same as those in tier one, plus up to £16,000 of dunded support to address the needs identified by their NLE. 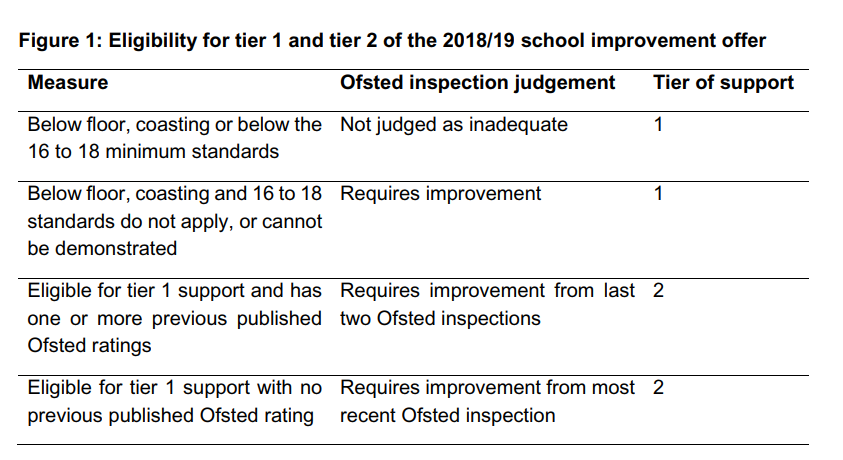