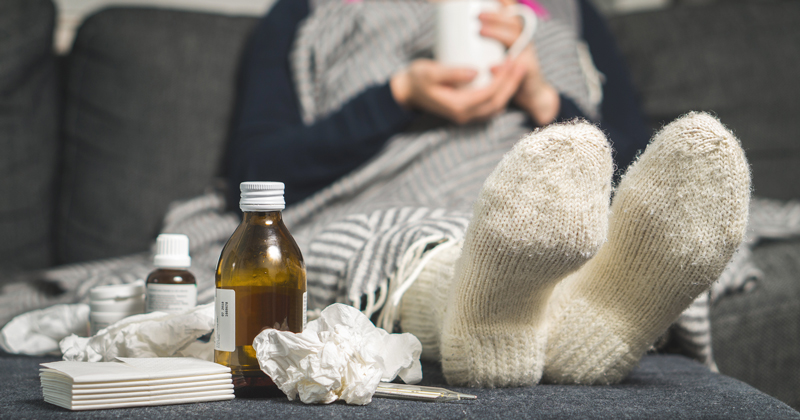 Hands up if you were ill over Christmas and New Year? If you stayed healthy, then well done you. About half of teachers get sick during the holidays, according to our Teacher Tapp survey data, so be aware it might get you next time!

Why are teachers so prone to Christmas illness? In part, it doesn’t help that classrooms are germ magnets. Thirty sticky, sweaty humans milling about in a confined space with restricted air-conditioning is a quick way to spread bacteria. Add into this mix the general grimness of children and their forgetfulness about washing hands or covering their noses when they sneeze, and teachers find themselves amid a plume of disease opportunities.

Parents don’t help. Stuck for babysitters when their child has a cold or infection, many send their offspring to school. Between the October half-term and Christmas, we found that in any given week about half of teachers had to send a sick child home (or to a nurse). Little wonder that 10 per cent of teachers also took a day off with either a cold, flu or a cough in the same period.

Another, larger, group of teachers seem to have been holding on until the holidays before their fluey meltdown. People who feel stressed in their jobs are likely to feel ill and yet not take time off – either because they are too panicked to notice their illness or because they feel an absence will only make their stress worse. When these teachers finally do get a rest, the whole thing catches up with them and lays them out.

So what can teachers and school leaders do to limit the level of sickness, especially during holidays?

One policy (although difficult to achieve) is a cap on the number of hours a teacher spends in classrooms. When we looked, we found that teachers who do more than 22 hours of classroom teaching a week had a sickness absence rate that was almost twice as high as those who taught for fewer than 22 hours. We’re not clear why it’s 22 hours – but that seems to be where the cliff-edge happens.

One school trialled a second (ingenious) solution. Using staff absence data from the past few years, leaders identified two weeks in the year with the highest levels of illness. Both were during longer terms with no natural break of a bank holiday. The school now plans two “long weekends” during these periods, where staff are off on the Monday or Friday. In return, the school runs for two days longer at the end of the academic year, as the leaders found that absences for sickness were rare before the summer holidays. By giving these mini “health breaks”, the school has substantially reduced the sickness rates (and the cost of additional cover).

That seems to be where the cliff-edge happens

Finally, over the year of analysing Teacher Tapp data we’ve found that while headteachers work long hours they are among the happiest and healthiest of school workers. Why? Because they have the most autonomy. Researchers in the 1960s Whitehall studies found that managers tend to have better health than the people they line manage, simply because they have more choice over how they manage their work.

Nevertheless, as the former headteacher Tom Sherrington said in a recent blogpost, there are many ways for teachers to gain control over their environment – whether it’s changing your classroom environment to suit you, instituting hard boundaries about times when you will and won’t work, and creating personal goals for your work this half-term.

Feeling in control won’t always fight the germs. For that you will also want antibacterial hand gel, tissues, a good night’s sleep and a daily dose of vitamin C. Put it all together and you might just stay healthy this year. Good luck!