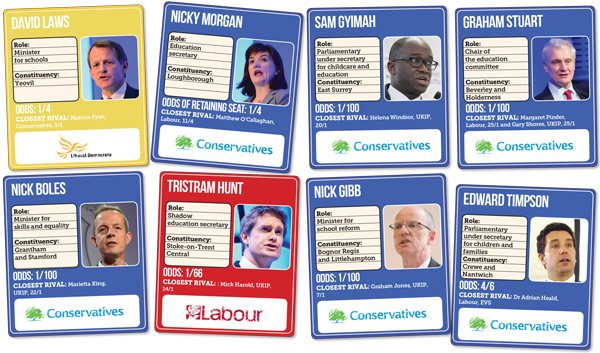 Here is a full list of how our education MPs got on in the election:

Morgan was fighting a marginal seat in Loughborough and many predicted it would be another close call between the Conservatives and Labour.

But she all but romped home with a majority of 17.7 per cent, picking up nearly 50 per cent of the vote.

One of the biggest shocks in the education world, Laws lost his Yeovil seat to Conservative Marcus Fysh who got a 9.3 per cent majority. He was 1/4 on Thursday morning to win back his seat.

Gibb increased the Tory stronghold in Bognor Regis and Littlehampton with a 29.6 per cent majority.

Timpson’s Crewe and Nantwich ward was singled out as a potential upset, but he won with a 7.3 per cent majority.

Nick Boles, minister for skills and equality, IN

Huge majority of 35.3 per cent in Grantham and Stamford for Boles.

Another easy victory for Gyimah who got a 40.4 per cent majority in his Surrey East ward.

Graham Stuart, chair of the education committee, IN

Won with a 23.2 per cent majority in Beverley and Holderness.

Hunt held his Stoke-on-Trent Central seat with a 16.7 per cent majority

Click here to see a larger pic of our top trump cards.