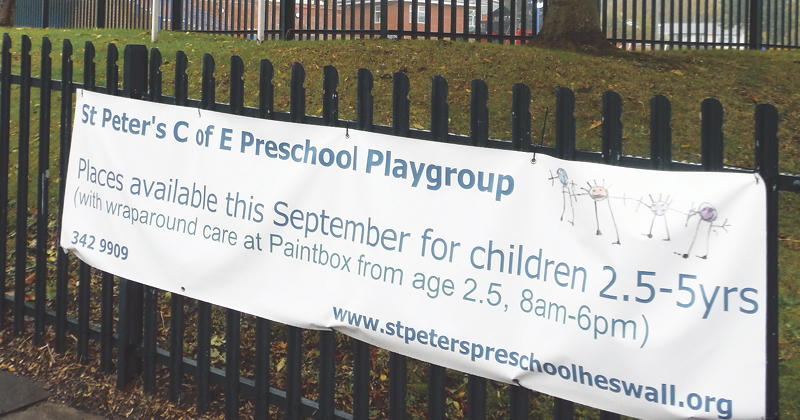 A primary’s “feeder” pre-school has been charging parents a “retainer fee” of almost £300 to secure government-funded nursery places that should have been free.

St Peter’s pre-school playgroup, in Heswall, the Wirral, charged the parents of a toddler £275 to reserve a place for her ahead of her third birthday, despite her being entitled to a free place under the government’s 15-hours-a-week childcare policy.

The pre-school states on its website it is a “feeder school” to St Peter’s Church of England primary. They also share the same site, which could mean the school is accountable for legal breaches on its grounds, despite its lack of direct involvement in the cash charge.

It also seems to breach a contract between the pre-school and its main funding body, Wirral Borough Council, which states providers must not “levy any fee or charge parents in advance for the Early Years Funding Education to be refunded at a later date”.

The school told parent Don Staniford it has now scrapped its retainer “policy”, but only after he complained.

It is disappointing to discover the pre-payment made in June to reserve a place for my daughter was not a deposit, but a cash grab

In a letter seen by Schools Week, he wrote: “It is disappointing to discover that the pre-payment made in June to reserve a place for my daughter in January 2017 was not a deposit, but a cash grab.

“My sister [who contributed to the fee], my wife and myself were led to believe that this was money to be taken off future fees [until eligible for a free place]. We were seriously misled.”

Staniford said the holding fee was “particularly unjustified” given the pre-school had no waiting list, but was advertising spaces in September.

Staniford has also referred the case to Wirral borough council so other parents can “be on guard against similar sharp and illegal practices”.

A council spokesperson said it was looking into the case.

Elizabeth Passmore, in her final report as the chief schools adjudicator, said in January that too many schools were breaking admission rules. Under the code governing school admissions, requests of financial contributions are forbidden from forming any part of the admissions process.

But pre-school provision generally falls outside this remit, according to Alan Park, a former schools adjudicator.

He said the legal responsibility lay with the providers, but that governors at the primary school – one of whom, Helen Clough, previously sat on the pre-school committee – might also be answerable as the apparent breach took place on the school’s grounds.

“The school’s governors should also be accountable for anything that takes place on their site, even if they are not the actual ‘provider’.”

The pre-school is registered as a charity. Its accounts for 2014-15 are more than 100 days overdue with the Charity Commission.

Schools Week asked the school detailed questions about its policy, but in response received a short statement from Jen Ellis, chair of St Peter’s pre-school committee, which suggested the policy has been ditched.

“Our admissions policy correctly states that we do not charge a retainer fee and this has now been clarified with all parents at the setting.

“If any of our parents has any queries about our policy and procedures, we are always happy to discuss this with them.”

In an email to Staniford, the school said the policy was put in place by a “previous committee”.