The hike in exam prices has dropped off since Ofqual began to publish qualification costs, but the rate is still above inflation.

The cost of GCSEs and A-levels rose by 3.3 per cent last year, Ofqual’s second analysis of exams prices has revealed. That’s above the rate of inflation, which was 1.8 per cent in January 2020.

But last year’s increase was at least not as steep as in 2018-19, when the rise was 5.6 per cent, according to Ofqual’s first ever qualifications price index (QPI) published last year.

That report also revealed the cost of GCSEs and A-levels had soared by 17 per cent across the past three years.

Ofqual has previously said it is making the data on costs of regulated qualifications available to be more transparent and to help ensure qualifications are “provided efficiently to users and represent value for money”.

Prices for last year were set before it was announced exams would be cancelled, with boards promising to give cash back. But Schools Week revealed only a quarter of fees were returned.

A Schools Week investigation also then revealed exam boards have increased their fees between 2 and 5 per cent for this year’s exams, costing schools millions of pounds, despite exams again not going ahead.

Ofqual said the prices were analysed “as if examinations and other qualification assessments had gone ahead as normal”. 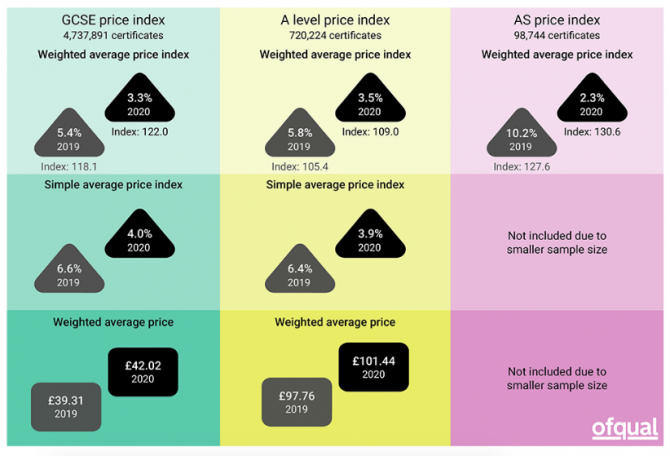 This year’s analysis was carried out using a sample of 207 qualifications, which account for 99 per cent of all GCSE and A-level qualifications certificates issued. The prices cover November 2019 re-takes and the cancelled summer 2020 examinations.

Ofqual also published a separate “contextual analysis” of the “different activities which took place for qualification delivery in 2020”.

The analysis, which drew on interviews with three exam boards, three awarding organisations, two sector representative bodies and a school, found “the impact of people or staff cost” was particularly hard, including that “staff worked extended hours”.

Other findings included that the “unpredictable external environment and impact of the coronavirus pandemic provides ongoing uncertainty for the delivery of qualifications this year and beyond”.