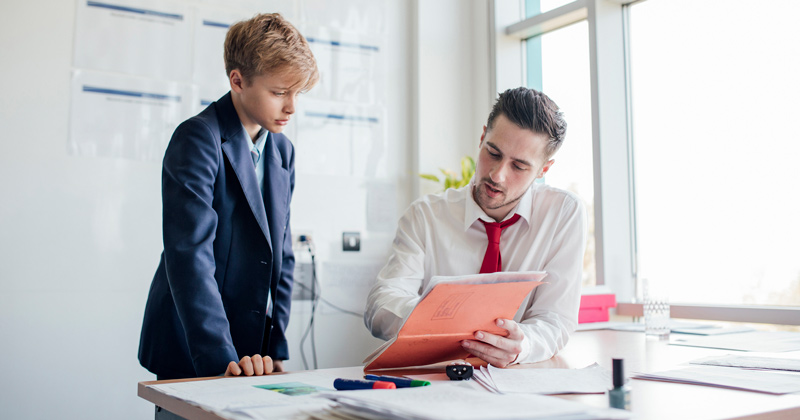 The underachievement of white, working-class boys has made the headlines again this Christmas. But what does it take the get them to succeed? Atlantic Academy principal, Lesley Bishop is on a mission to find out

If we are serious about ending the perennial problem of white working-class boys’ academic underachievement, there are no shortcuts. Stereotyping won’t help either. We have to understand the obstacles they face if we are going to remove them. In fact, we have to accept that they face obstacles particular to them at all before we can even start.

Portland is home to an isolated community – an island connected to Dorset by one road, without a trainline, and 20 minutes from Weymouth. Together, Weymouth and Portland are classed as the third most disadvantaged local authority in England. The population is 99% white British, and job opportunities are limited following the closure of the Royal Naval Base in the 1990s.

At Atlantic Academy, 35 per cent of students are entitled to Free School Meals. For boys, it is 40 per cent. Some 38 per cent are from Fortuneswell North, now the most deprived ward in Dorset, and in the top 10 per cent nationally. It means that for some of our pupils, home life can be chaotic. It is not unusual for some of the boys to turn up at school hungry, unprepared, and already subjected to toxic masculinity.

Yet our pupils’ background is not a reflection on their talent or ability to learn.

Last year, Atlantic Academy, part of the Aspirations Academies Trust, replaced The Thomas Hardy School as the second highest ranking in Dorset on Progress 8 with a score of 0.4.

When I and ten of my colleagues visited researched Durrington in April last year, we came across a presentation and a book by Matt Pinkett and Mark Roberts entitled Boys don’t try: rethinking masculinity in schools. We were intrigued by the book and its arguments, but at that stage we didn’t even think we had a problem.

Of course, we know we are dealing with lots of legacy issues with boys with regard to behaviour, sexist attitudes and what it means to be part of the Portland community. We still had higher exclusion rates for males and had to tackle their lack of interest in studying, but our gender gap on Progress 8 was 0.05 in 2018.

Then, in 2019, that gap widened substantially to 0.89. It wasn’t that the boys had not improved. They had made huge improvements, with an improvement of their P8 score of 0.94 over two years since the Aspirations Academy Trust takeover, but the girls had completely outperformed them with an increase of 1.63.

The first phase of our rapid improvement journey has been to focus on empowering teachers to teach consistently good lessons with a relentless focus on disruption-free learning. We supported teachers to challenge behaviour in order to transform attitudes, but we also supported pupils and their families to make sense of their lives and take control of them.

To do this, we have been guided by the Gatsby benchmarks. We’ve worked hard on our extra-curricular offer and enrichment activities, which range from book binding to mountain biking. We’ve worked with the Magic Breakfast charity. And we’ve instigated high expectations on uniform and equipment – both of which we provide if they need it – to ensure that nobody is singled out.

And it has worked for everyone, but it has done so unequally. More needs to be done to tackle the issue of our white working-class boys lagging behind their female peers, and in many regards, this is the toughest challenge we face.

Informed by Pinkett and Roberts’s book, we have launched a major new phase in our improvement journey – one without which all of our previous work risks not being sustained. It has involved CPD and introsection. It has required rethinking our expectations, not just how we chastise but how we praise also. It has called for consciously redeveloping our resources and actively working with our community.

None of it is guaranteed to succeed, but it is informed by the best and broadest evidence base we have, rather than league table-friendly shortcuts or conscience-soothing stereotypes.

Anything less would see us fail our white working-class boys, even as they are making progress.