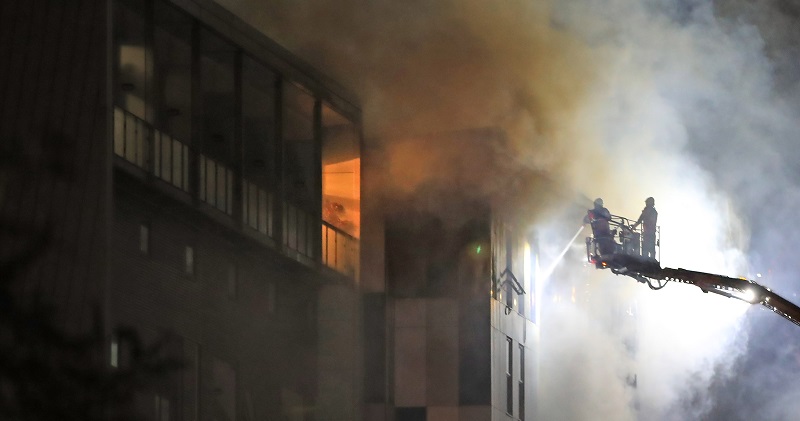 The government has been told its “shameful” record on fire safety must end by unions who have demanded that sprinklers be fitted in all schools.

Four education unions have written to education secretary Gavin Williamson today amid the fall-out after a huge blaze at student accommodation in Bolton.

A Schools Week investigation in September found just three per cent of schools that had fires in the past five years had sprinklers fitted.

It also comes as the government drags its feet in response to its consultation over updated guidance into fire safety design in schools, launched in the wake of the Grenfell Tower disaster

In the letter, which cites figures from Schools Week’s investigation, the unions said: “For years we have been ignored while your Government allowed its own rules to be flouted. The fire in Bolton was far too close a call. It must mark a turning point.”

Unions have set an 18-month deadline, by which point “all school buildings must be made safe”.

They have asked Williamson to:

Schools Week’s sister paper FE Week has also revealed how a college with “failed” Grenfell-style cladding will remain open – despite increased concerns after the Bolton fire, where 100 people were evacuated with two youngsters suffering minor injuries.

An investigation by FE Week in October revealed Highbury College, in Portsmouth, has requested up to £5m in financial support from the Education and Skills Funding Agency (ESFA) to replace Grenfell-style cladding that had ‘failed’ a safety test.

The DfE has yet to make a decision on the funding request.

The unions’ letter points out only 15 per cent of new schools built under the Priority Schools Building Programme were fitted with sprinklers.

“It is two and a half years since the Grenfell fire. Since that terrible night, your Department has failed to act”, the letter read.

“Your Department has only required that school buildings over 18 metres tall are checked for flammable cladding.

“The other action of your Department was to launch a consultation on school fire regulations. This closed on May 31 and you have neither published the evidence submitted nor responded to it.”

The letter is signed by the Fire Brigades Union, the National Education Union, National Union of Students, and the University and College Union.

Correction: This article has removed a line that was included in the NEU letter, but later discovered to be factually incorrect, which stated it was a “disgrace the school adjacent to Grenfell Tower is still cald in the same flammable material”. NEU apologised for its inclusion in the letter.