The government has released provisional key stage 4 data this morning that reveals how schools have fared in headline accountability measures.

The data includes figures on the new Progress and Attainment 8 measures (our analysis so far here) and also provides an update on EBacc figures.

Here we round up the key findings from the EBacc data.

1. Entries and achievement are down

The proportion of pupils entering the government’s flagship performance measure, the EBacc, has decreased by 1.5 percentage points since last year.

This summer, 38.1 per cent of pupils in maintained schools entered the EBacc, down from 39.7 per cent last year.

Meanwhile, 23.5 per cent of pupils achieved the EBacc by gaining grades of 4 or above in English and maths GCSEs, or C or above in unreformed qualifications.

This was slightly lower than last year, when 24.7 per cent of pupils achieved the EBacc.

Meanwhile, one fifth of pupils, at 21.1 per cent, achieved the EBacc with the new “strong pass” of grades 5 or above.

This drop in entries to the EBacc bucks a rising trend over the previous five years. 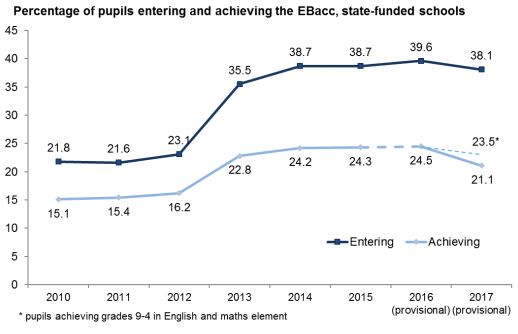 2. Fewer pupils are achieving the EBacc because of a drop in language entries

A drop in entries to EBacc languages is the likely explanation for most of the overall decrease in achieving the headline measure, the Department for Education has said.

Of those pupils who entered four of the five EBacc pillars, the majority in 2017 (80.4 per cent) were missing languages.

The proportion of pupils entering languages dropped to 47.3 per cent, 1.7 percentage points down from last year.

Converter academies had the highest score for Attainment 8 at 49.7 points. The lowest were studio schools at 36, just behind UTCs on 37.1.

UTCs fared worst of all types of schools on Progress 8, with a score of -0.87, compared with 0.10 in converter academies.

Schools Week reported this trend in 2016 coverage of GCSE results with an explanation by Education Datalab on why Progress 8 scores in grammar schools are “overrated”.

4. Attainment 8 scores are down because of the 9-1 GCSEs

“These decreases are as expected,” said the report, following the move to the 9-1 GCSE numbered system.

5. About 60 per cent of pupils hit grades 4 and above in English AND maths

Under the new 9-1 GCSE grading system, 63.3 per cent of pupils got grades 4 and above in English AND maths.

This counts as a “standard pass”.

Meanwhile 42.2 per cent of pupils achieved a “strong pass” of grade 5 and above in English AND maths.

Because a grade 4 maps directly onto the old C grade, a comparison between the two can be made.

The DfE reports the proportion of pupils passing English and maths as stable, having increased ever so slightly by 0.7 percentage points.

6. Entries to science have risen

Pupils are now moving away from science BTECs, which no longer count in performance tables.

7. Girls continue to do better than boys

The trend continues this year with girls outperforming boys in their GCSE scores.

On their average Attainment 8 score, girls managed 48.7 points overall. This was higher than for boys, who scored 43.4. 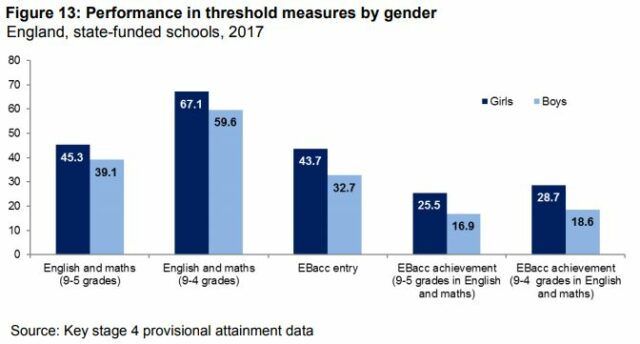