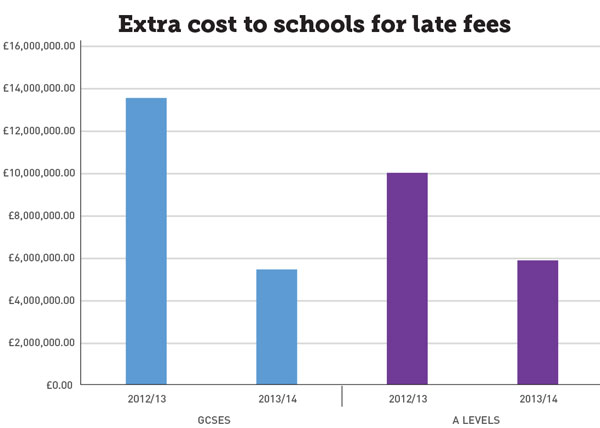 Schools have saved £12 million in the past academic year by entering more pupils for exams on time, Schools Week estimates.

Ofqual’s latest figures show that in 2013/14, half the number of pupils sitting GCSEs or A-levels were entered late compared with the previous year.

Last year, the cost of missing the administrative deadline was, on average, £10.78 for each GCSE unit. For A-levels, the per-unit cost averaged £33. Most GCSEs are made up of at least two units, with some taking as many as six. A-levels are typically four. Costs vary according to how many units students take.

Analysis by Schools Week shows that last year schools would have spent an estimated £22 million on late fees. This does not include the original exam entry fee, which is also payable.

For A-levels, late entrants fees this year cost schools and colleges £5.8 million, a fall of roughly £4.13 million from the previous year.

Exam boards generally charge double if a pupil is entered late, and, in some cases, up to treble if an entrant is “very late”. The estimates are only based on the first of these figures.

Exam board AQA said the move to linear exams had impacted late entrants, with schools no longer making exam entry decisions based on January or March exam results.

A spokesperson said: “We have supported our schools this year to help them with their planning and to reduce the possibility of errors that might be caused by the changes.

“We have provided warning reports about entry errors and contacted schools to discuss entries.

“As usual, we have provided training and regular newsletters and information about the administrative side, and particularly changes for the current year.

A spokesperson for Pearson said: “The vast majority of schools adhere to the main entry deadline. Late entries are exceptions, offered to ensure that no candidate is disadvantaged – for example, by a pupil moving schools during the academic year.

“We work with schools and colleges so that they have a clear understanding of the deadlines. Our entry deadlines enable us to organise our resources as we plan the administration of exams each year.”

An OCR spokesperson said: “For schools and colleges, this is a tribute to exams officers, most of whom are not teachers, who have helped to make their centres more efficient and thereby saved them money.

“The narrowing of exam sessions this year may have helped and the move to a single exam session in the future will do more. As teachers get used to the new timetable, they are also likely to improve their timelines.

“As a not-for-profit, OCR sets its fees in light of educational necessities and not in pursuit of shareholder value. By and large, the additional charge relates to the additional cost. If late entries fall, therefore, costs will fall.”

Each of the exam boards has increased the fees slightly for this academic year, with it now costing on average £12.58 for a GCSE unit and £36.44 for an A-level.