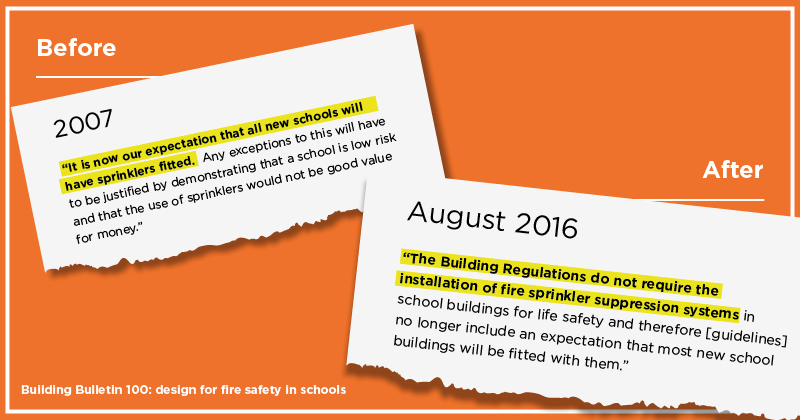 The Observer has learned that ministers are re-examining changes to school safety guidance and that sections weakening the language around safety requirements –  including sprinklers – will be removed.

It follows a front page investigation by Schools Week into the dramatic dip in school sprinkler installations since 2010.  It is believed at least 260 new free schools do not have such systems in place.

Last August, the government released a consultation on new fire safety standards for schools – the results of which have still not been published 10 months later.

The consultation stated that reformed guidance would “no longer include an expectation that most new school buildings” would be fitted with sprinklers. The government insisted this was only a change of language, not of actual rules governing sprinkler installation.

Since 2010, the proportion of schools installing sprinklers plummeted from 70 per cent to 35

However, since 2010, the proportion of new school buildings installing sprinkler systems has plummeted from 70 per cent to 35 per cent, according to David Amess, chair of the all-party parliamentary group for fire safety,

And last year, when schools minister Nick Gibb introduced the consultation to parliament, he said that new sprinklers in schools added between 2 and 6 per cent extra cost. “The department’s assessment is that the additional spending would significantly outweigh any relatively modest saving from preventing some damage to school buildings.”

After a rethink, however, The Observer reports the weakened language will be “struck out” from the new guidelines, which Schools Week had already been removed from government websites reported on Tuesday.

Amess told The Observer he welcomed the changed but would “keep up the pressure” until the government makes sprinklers “mandatory in all new schools”.