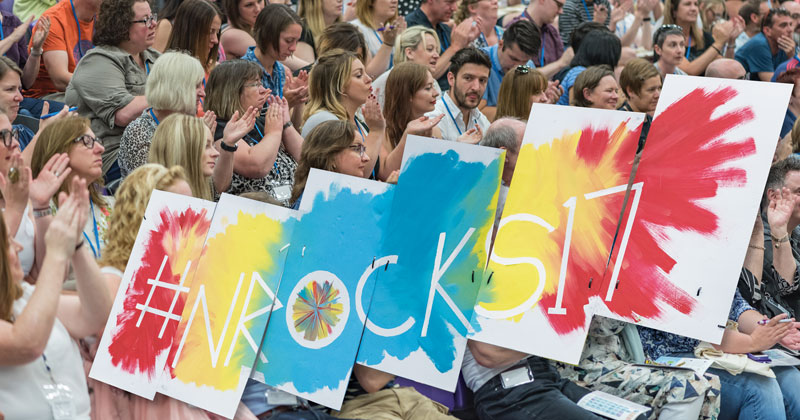 The Northern Rocks conference kicked off with a minute-long round of applause for its co-organiser Emma Hardy, who was elected to parliament this month.

The new MP for Hull West and Hessle, a former primary school teacher and an organiser of the event, was hailed by some, including the NUT’s general secretary Kevin Courtney, as “the MP for Northern Rocks”.

Delegates clapped for around a minute after Hardy was congratulated by fellow organiser Debra Kidd on her election, which saw her retain the seat previously held by former education secretary Alan Johnson with a majority of more than 8,000 votes.

What on earth are we doing to our young people?

Addressing delegates, Peacock warned that teachers were too often “self-limiting” in order not to “put our head above the crowd”, adding: “the teachers I’m meeting are showing me professional agency is about having a voice”.

Bousted warned that the profession felt “cowed and constrained”, and lamented the effect of excessive testing on pupils.

“What on earth are we doing to our young people? Putting them through a system where their future will depend on two or three weeks.”

Later in the day, a ‘small island debate’ examined the differences between education in England and the devolved nations, in which former headteacher Tom Sherrington warned that schools are “over-burdened with expectations” as de-facto social care agencies.

“A lot of schools, once you get 50 per cent-plus pupil premium, you’re not just a school educating kids, you’re a social care agency and it’s because of a school’s work with families and communities, bound together, and you get almost no credit for it whatsoever,” he said.

“And every time a prime minister or a minister says ‘mental health’s a problem, let’s just train a few teachers for a couple of hours and that will sort it,’ it’s a joke.”

Ofsted’s chief inspector has been criticised over her decision to pull out of the Northern Rocks teaching conference over the weekend – leaving a stand-in act to question the organisation’s independence.

Spielman was due to speak in front of delegates at the event on Saturday, but cancelled her appearance in late April as it was due to take place so soon after the snap general election. But organisers were dismayed to discover Spielman delivered a speech to the annual conference of the Sixth Form College Association last week – four days before the Northern Rocks conference.

Debra Kidd, the co-organiser of Northern Rocks, said she was informed by Spielman of the cancellation on April 25, a week after the election was called.

“She felt it would be too soon, that she may not have met a new education secretary and that it would be difficult. I completely understood and that would have been that.

“But then I noticed last week that she had spoken at the Sixth Form Colleges conference.”

Kidd claims she was told by Spielman’s office that the Sixth Form conference was “different” because it involved a scripted speech which had been approved by the DfE and not an interview which might involve her being “caught out saying something new” – leading Kidd to question the independence of the inspectorate.

Ofsted denies the DfE had any say in Spielman’s SFCA speech and claims the Chief Inspector cancelled her appearance early in order to avoid letting organisers down.

But Kidd is suspicious of the timing of Spielman’s decision to pull out, which came just two days after Kidd sent advance questions to the watchdog.

David Cameron, an education consultant and speaker at Northern Rocks, was also highly critical of Spielman’s decision not to appear.

Speaking at the event, he claimed she had chosen not to attend the conference because she felt that the format of an interview “would mean she could be lured into an indiscretion”. He said her absence raised concerns that Spielman “felt she could not be in an environment where she would be held “accountable to teachers”.

“If you feel you cannot do that without having a policy brief from government, I think that sells short the concept of an independent inspectorate,” he said, to rapturous applause.

An Ofsted spokesperson said Spielman’s decision to pull out was taken “due to concerns that in any post-election period of uncertainty she may have had to pull out at short notice”, and insisted that the DfE “has never cleared” the chief inspector’s speaking engagements or the content of her speeches.

“As the proposed key speaker, Amanda did not wish to compromise the event and wanted to give the organisers plenty of time to make fresh arrangements,” the spokesperson said.

“Her full schedule, including a keynote address to the Education Festival this Friday, the SFCA speech and questions and answer session last week, numerous meetings and media interviews also meant choices had to be made about prioritisation of activity.”

Children under 7 ‘too young to test in any way’

Children under seven are “too young to test in any way”, a leading child psychologist has warned, amid questions about the effectiveness of baseline testing and the phonics check.

Pam Jarvis, a chartered psychologist and reader at Leeds Trinity University, and Terry Wrigley, a visiting professor at Northumbria University, met with Northern Rocks delegates to talk about the government’s testing agenda.

Jarvis warned that the current testing regime “had a go” at children aged under seven with “language that is too complicated”.

“They’re not actually getting it. They are not old enough,” Jarvis warned delegates.

“And this to me is the basis of what the Department for Education doesn’t get. They seem to think that education is incremental, that children are just short adults, but they’re not.”

They’re not actually getting it. They are not old enough

Jarvis warned that relying on scores from one-off tests to measure pupils’ abilities was a particular problem for summer-born children with “one fifth less life experience than some of the other children in their class” and so were less likely to get a good score.

“Children under seven are too young to test in any way,” she said.

“Obviously you will as a teacher assess what they’re doing and you have many ways of doing that, but they’re too young to test on an iPad, or [sit] a language-based test and then that score, just one score, goes shooting through to the ministry.”

Wrigley, a coordinator of the Reclaiming Schools campaign, said the new tests were “heavily rule-bound”, and this resulted in “bizarre questions for children”, like the need for 11-year-olds to know what a fronted adverbial is.

He also raised concerns about the narrowing of the curriculum, specifically the removal of speaking tests as a scored element of English GCSEs.

“We don’t want children to be articulate anymore,” he said. “We don’t want them to speak, either in primary school or at GCSE. Except in the private schools, they still do spoken English in the iGCSE. They’re allowed to.”

Wrigley said his organisation was looking at whether it was appropriate for all children to take part in the phonics screening check, adding: “It doesn’t tell you anything if a child’s reading fluently.

“There are a lot of words in English, a lot of basic words that are not phonically regular,” he said.

Jules Daulby, a teacher with the Driver Youth Trust, said teacher assessment “seems to have become toxic”, but insisted it should still be used.

“We’re not allowed to teacher-assess; we’re not trusted, we’ll get it wrong. Teacher assessment should still be valid, with moderation in local areas comparative with other similar areas.”

One delegate suggested a more observational, profile approach like that used in the early years, while another said pupils should be assessed on a “portfolio of competence” and a broader range of skills.

However, there are some academics who argue that testing of younger children is both appropriate and possible.

Rob Coe, from Durham University’s Centre for Evaluation and Monitoring, a baseline test provider, told Schools Week in 2015 that his organisation’s assessment could make predictions for four-year-olds “good enough for what we need” and could more accurately predict the score range in which pupils were likely to be in future.

He was responding to criticism from Reclaiming Schools that the CEM assessment only made accurate predictions of roughly half the children tested, which he said was “statistically right”, but did not necessarily mean it made an incorrect prediction for the other half of pupils.

How to make the times table check worthwhile

The Conservatives’ proposed times-table test would be useful if similar to the phonics check but it should be applied in year four, not year six, according to statistics expert Jack Marwood.

In a workshop that promised a “critical look at education data”, Marwood, a primary teacher by day, insisted the government’s proposal to administer a times-table check in year six was “ridiculous”.

“It should be in year four if you’re going to do it because you should have learned them by then,” he said.

Plans to improve pupils’ mastery of times tables were first introduced in the 2015 Conservative manifesto, backed up by a promise from Nick Gibb of “a short computerised test at the end of primary school”. This was followed by an official announcement of a school-based pilot in 2016, which was later delayed.

Contract notices for suppliers were issued last year with a new date of 2017-18 for the check’s introduction.

The check was again mentioned in the party’s most recent general election manifesto, which stated “we will build on the success of the phonics screening test. We will expect every 11-year-old to know their times table off by heart.”

The prospect of more standardized testing was criticised by the general secretary of the National Association of Head Teachers, Russell Hobby, who wrote in a Schools Week column reacting to the manifesto: “School leaders will look on in dread. The government wants children to learn their times tables. So do we. They don’t need extra tests to make it happen.”

“We in Ofqual are extremely alert to the potential burden that we may be putting on schools,” she warned.

But Marwood, a pseudonym he uses for work outside his school, while disagreeing with the proposed age of implementation, expressed support for the principle behind times-table testing.

“If it’s anything like the phonics check, I can see it being a useful check,” he said, “because it will be quite limited in its scope and will test whether the children have actually learned their times tables by a particular point.”

He proposed that the “list of good data in [primary] education” is currently limited to three: alphabetic knowledge, pupil age (autumn-, winter- or summer-born), and the phonics check. He considers the latter a “really good assessment” for a number of reasons.

“I don’t think it’s trying to do too much. It’s just checking whether children can decode phonemes,” he said.

It also allows teachers to “basically rank the children, which is what a good test does”. Thirdly, the inclusion of “nonsense words gets rid of the cultural biases which you would have towards children who were strong readers if you didn’t have the alien words.”

The phonics check, introduced in 2012 by the Department for Education, is administered every June to all year 1 pupils.