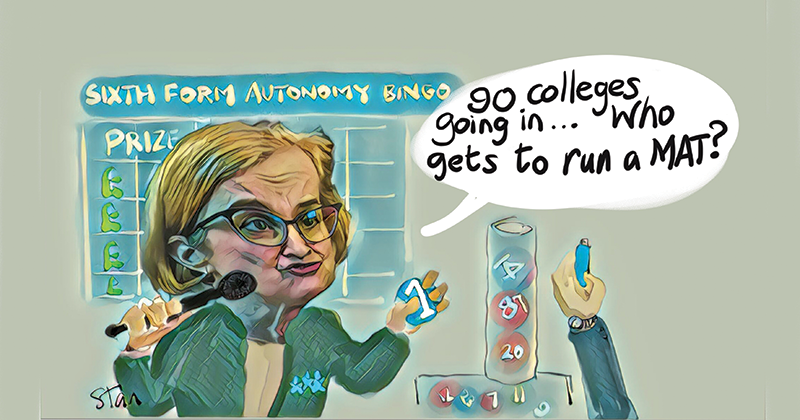 Sixth-form colleges have received worse Ofsted grades this year, meaning that fewer than were first expected will now be permitted to create academy trusts.

The drop was brought up by Amanda Spielman, the chief inspector of Ofsted, who told delegates at the Sixth Form Colleges Association conference last Wednesday that while sixth-form colleges were the “jewel in the crown of the post-16 sector”, standards must be kept high.

Ten sixth-form colleges out of 23 inspected this year needed a longer two-day inspection, after which seven saw their Ofsted rating tumble from the upper two grades either to ‘requires improvement’ or ‘inadequate’.

“While for now this is about a small number of inspections, no-one can afford to be complacent,” she warned.

Around 20 sixth-form colleges are currently in the process of converting to become academies, with three already converted. “A third or more” of the sector will eventually academise, according to James Kewin, deputy chief executive of the SFCA.

Most want to set up their own multi- or single-academy trust, in which they would become more influential “system leaders” by taking local schools in the area into their trust.

But colleges which receive a grade three or four from Ofsted will be prevented from becoming a lead school in a trust, and will instead have to join existing academy trusts, said Kewin.

Education can only benefit from good colleges having a greater influence

“Not many will want to join an academy trust as they will lose the autonomy we have,” he said.

The country’s 90 sixth-form colleges are classed as private sector organisations, and so have the freedom to borrow money commercially and set their own admissions policy.

However, they also pay VAT. Converting to academy status is appealing because the government refunds those costs to academies.

Another “major draw” of conversion was “positioning sixth-form colleges in the mainstream of education rather than on the fringes”, said Kewin.

Dan Moynihan, chief executive of Harris Federation, a multi-academy trust, has previously called for sixth-form colleges to join the academies sector, but said it would “not be unreasonable” to suggest those with lower Ofsted grades should “pause any plans” to create a MAT. “Education can only benefit from good colleges having a greater influence”, he added.

This year, 87 per cent of sixth-form colleges overall were rated ‘good’ or ‘outstanding’, with just 12 per cent receiving ‘requires improvement’ and only one per cent rated ‘inadequate’.

In the 10 full inspections carried out this year, one ‘outstanding’ college fell two grades to ‘requires improvement’, while five ‘goods’ dropped to a grade three, and one tumbled from ‘good’ to ‘inadequate’. This means there are three fewer colleges rated ‘good’ this year than last, and two more are at grades three and four.

Two colleges – Birkenhead Sixth Form College near Liverpool, and St John Rigby College to the north-west of Manchester – moved up from ‘good’ to ‘outstanding’.

Spielman offered “warm congratulations” to the pair, adding that the changes from modular to linear A-levels meant it had been a “stonker of a year” for all sixth-form colleges.

“Of all the forms of post-16 education, your colleges provide a particularly high level of quality.”