The government has revealed how it will dish out extra cash to fund teacher pay rises this year, with schools set to be paid the grant later this autumn, new documents show.

It was announced in July that teachers would get a rise of up to 3.5 per cent this year, after the 1 per cent cap on public sector pay rises were lifted. However, some teachers will only get a 1.5 per cent increase.

Documents released today confirm the amount being made available to schools to pay for rises will total £187m this year and £321m in 2019 to 2020.

The funding figure for this year covers the seven months from September 1, when the award came into effect, to the end of the financial year in March. The grant is bigger for 2019-20 because it will cover the full 12 months from April 2019 to March 2020.

The money will be allocated on a per-pupil basis, which the department said was the “simplest, most transparent and timeliest way to get the money to schools”.

To calculate the amount schools will get, the government has taken the overall annual pay bill for teachers, including additional costs such as pensions and national insurance, and applied the average percentage uplift of the announced 2018 to 2019 pay award.

Officials then subtracted the 1 per cent that ministers say schools must pay towards the rise. Their justification for this is that schools would have been planning for such a rise under the previous public sector pay cap.

The money has been divided between primary, secondary, and special schools based on the size of the teacher wage bill for each sector.

“We have done this to take into account, for example, that special schools generally spend more on staff per pupil.”

An Area Cost Adjustment has also been applied to take into account higher teacher wages in London.

The amount was then divided for each sector between the number of pupils to generate a per-pupil rate. 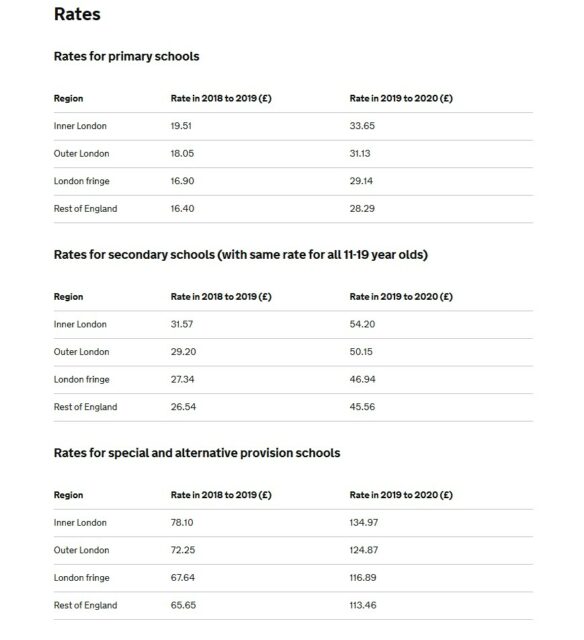 The changes mean a classroom teacher could get a pay rise of up to £1,366.

School will receive the funding “later in the autumn”.

A DfE spokesperson said: “We have today confirmed that the £508 million Teachers’ Pay Grant announced in July will be allocated on a per-pupil basis to support school budgets in 2018-19 and 2019-20. A high-level methodology has been published to enable schools to prepare to implement the pay uplifts for classroom teachers and leaders, including the 3.5% increase to the main pay range, as soon as possible – more detailed allocations will be published in October.”

However the DfE’s allocated pay rise fell short of the proposed uplifts recommended by the School Teachers’ Review Body.