The government plans to boost take-up of its free teacher job vacancies website by leaning on the big academy trusts to ditch “expensive” commercial deals.

Contracts seen by Schools Week reveal a three-stage plan to create a “behaviour change” and persuade schools and job seekers to use the government-run teaching vacancies website, launched two years ago.

The push comes as the government targets the costs of advertisements. Schools spend about £75 million on recruitment ads and do not always fill vacancies, says recent evidence to the School Teachers’ Review Body.

The Department for Education has issued two contracts worth a total of £185,000 to PR and digital agencies to boost the use of the jobs site.

The “communications plan [is] aimed at creating a step change in raising awareness of the service”, contracts state.

Phase one is focused on “building up a critical mass” of schools using the service.

Phase two will concentrate on increasing awareness and confidence “within the school community”. That includes establishing an evidence base to show how the service is performing.

So far, 75 per cent of schools in England are signed up to use the free service and more than 500,000 jobseekers visited the site last year, according to the DfE.

But an analysis by Schools Week last year found the website failed to advertise more than 55 per cent of available positions.

Schools Week contacted 15 trusts to find out if they use the website.

CORE Education Trust, which has four academies in Birmingham, said it used it for all of its vacancies because it was a “cost-effective means of attracting well-qualified candidates”.

Tim Coulson, its chief executive, said: “This gives us a broad and successful approach as we know teachers look at a number of different websites when looking for vacancies.”

But Julie-Ann Hewitt, the chief executive of the Epworth Education Trust, said the portal was “a classic chicken and egg scenario”.

“We have used it, and continue to use it, but we rarely get any responses. We have therefore continued to use other ways of promoting posts – including through the local authority and paid-for adverts.”

Hewitt added that while the website’s infrastructure was “clearly there”, schools and trusts might not be “comfortable enough yet to let go of recruitment ‘safety nets’ that we have used for many years”.

The Kemnal Academies Trust uses the DfE site alongside others, whereas Ark does not have a central policy for schools.

Four Communications Group has won the £105,000 contract for “PR procurement” that will run from October until March 2022.

The contract aims to “make a significant step change to further improve unprompted awareness of Teaching Vacancies [TV] with teachers, schools and stakeholders”.

Digital agency M Integrated Solutions has won a £80,000 contract for PR and social media campaign procurement that will run from November until March next year. The contract includes driving traffic to the website through the “relevant social channels and activities”.

Both companies did not respond to a request for comment.

DfE said they worked with schools, trusts and teachers to develop the service.

Ministers are looking to pay social media influencers to promote the Department for Education’s teacher recruitment website and catch-up plans.

A job post for a strategic communications manager overseeing catch-up proposals includes having to find “supportive voices and influencers for use in a wider paid-for campaign on continuing education”. This will focus on black and Asian groups, as well as those from lower socio-economic backgrounds.

Last summer, television presenter Kirsty Gallacher used her Twitter and Instagram accounts to promote the DfE’s back to school campaign. Experts told Schools Week Gallacher’s support could have cost anywhere from £4,000 to £15,000. 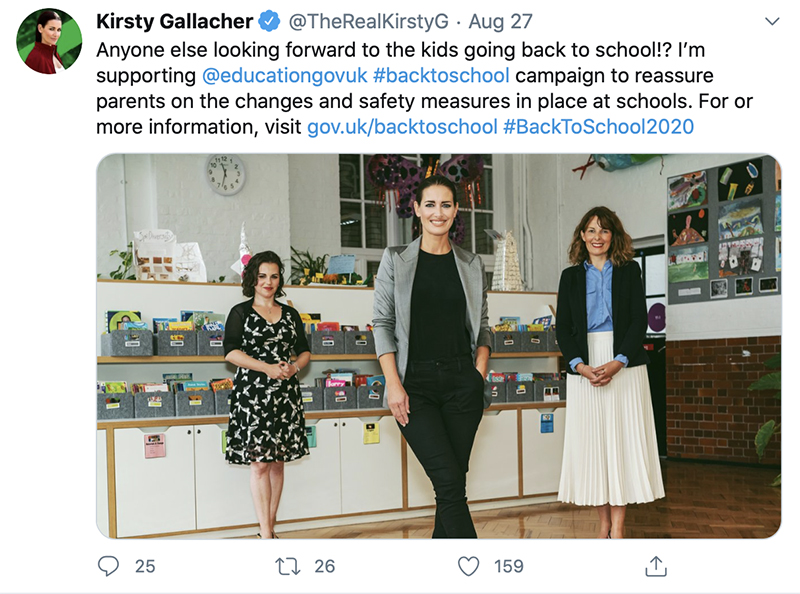 But the Cabinet Office has so far refused to reveal how much it paid her and the celebrity GP Dr Philippa Kaye for their contributions to the campaign.

In response to a Freedom of Information request, it said disclosing the information would be “likely to prejudice or harm the commercial interests” of the celebrities, the advertising agency Mullen Lowe Group or themselves in any “subsequent negotiations with other third parties”.

Posts by Gallacher and Instagram influencer duo ThisIsMothership had a combined reach “of more than 800k”, the Office said.

But Gallacher’s Instagram post only garnered 1,900 likes, while her two Twitter posts received 200 likes combined and fewer than 30 retweets. She later deleted one of the tweets that did not disclose it was an advert.

The DfE said the influence plan was “just one part” of a wider campaign, which reached “millions” through TV, radio, social media, print and “other advertisements”.