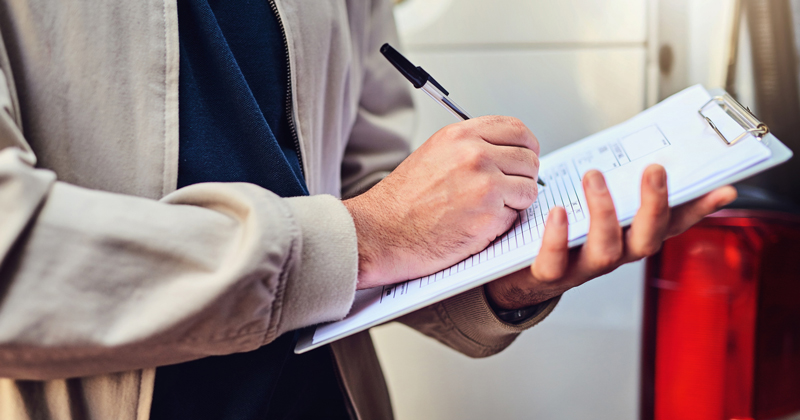 Ofsted judged a lower proportion of schools to be ‘good’ or ‘outstanding’ in the first year of its new inspection framework.

The watchdog has published management information on inspections conducted in the 2019-20 academic year, which takes into account reports published between April and the end of August.

However, the data is based on a smaller number of inspections due to them ceasing in the spring in response to the coronavirus pandemic. There were 3,247 inspections between September 2019 and March this year, compared to 5,558 in the previous academic year.

Here, we take a look at some of the findings.

In 2019-20, 77 per cent of schools inspected were judged ‘good’ or outstanding’ for overall effectiveness. This is a decrease from 80 per cent in the previous year.

But Ofsted said a slightly lower proportion of the schools inspected this year were ‘good’ or ‘outstanding’ at their previously inspection, when compared with last year. So this may have contributed to the “slightly lower grades” this year.

The decreases didn’t affect the overall proportion of schools rated ‘good’ or ‘outstanding’ though. This remained at 86 per cent as of the end of August this year, the same as at the same point last year. 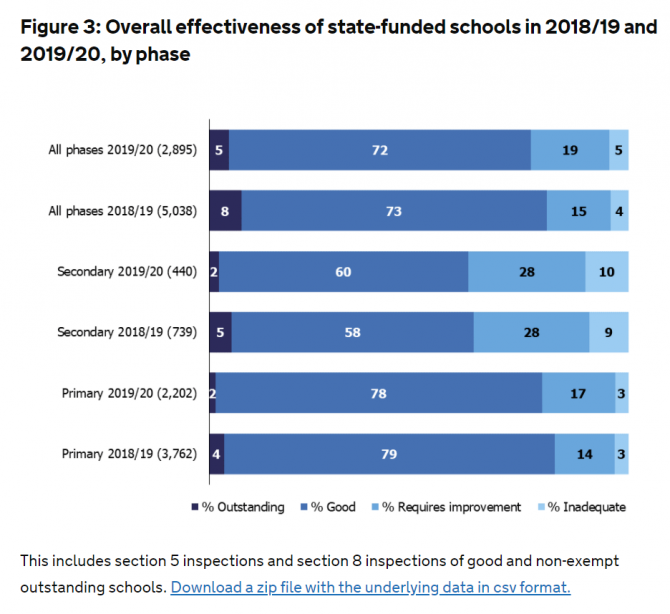 Ofsted said this was “probably caused by fewer previously good and previously non-exempt outstanding schools becoming or remaining outstanding at their inspections this year than in previous years”.

Under previous rules, mainstream schools previously rated ‘outstanding’ were exempt from re-inspection unless safeguarding or other serious concerns are raised, though that is due to change from next year.

Of the 253 “exempt” schools inspected, the percentage remaining ‘outstanding’ decreased to 15 per cent in 2019-20, compared to 16 per cent the previous year. 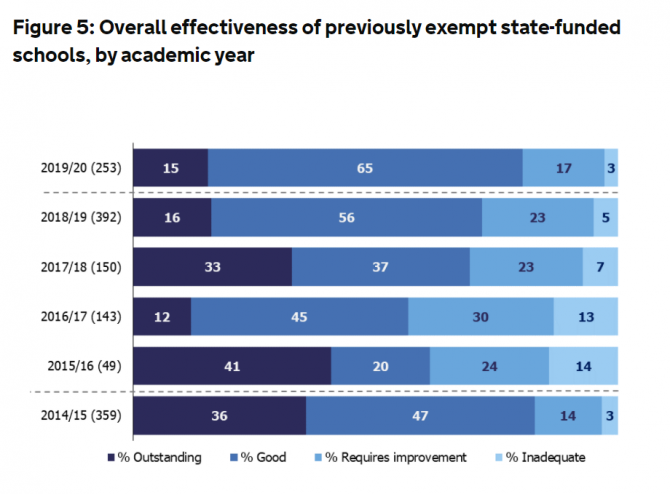 Ofsted said that while most of the exempt schools inspected this year did decline, a larger proportion than last year only declined to good – 65 per cent compared with 56 per cent last year.

Fewer declined to RI and ‘inadequate’ – 20 per cent compared with 28 per cent.

Ofsted say this may be “partly due to changes in the way exempt schools are selected for inspection”. They now consider the length of time since the last inspection.

All ‘outstanding’ schools are set to be routinely inspected again when Ofsted inspections resume next year, but it could take up to six years to get through them all.

Other ‘outstanding’ schools, including special schools and pupil referral units, have not been exempt from re-inspection.

Of those non-exempt schools inspected last year, 84 per cent kept their grade, down from 93 per cent the previous year.

Between 2014-15 and 2018-19, the proportion of previously good schools remaining ‘good’ or improving to ‘outstanding’ had increased each year.

But last year, there was a decrease of two percentage points, from 87 per cent to 85 per cent. 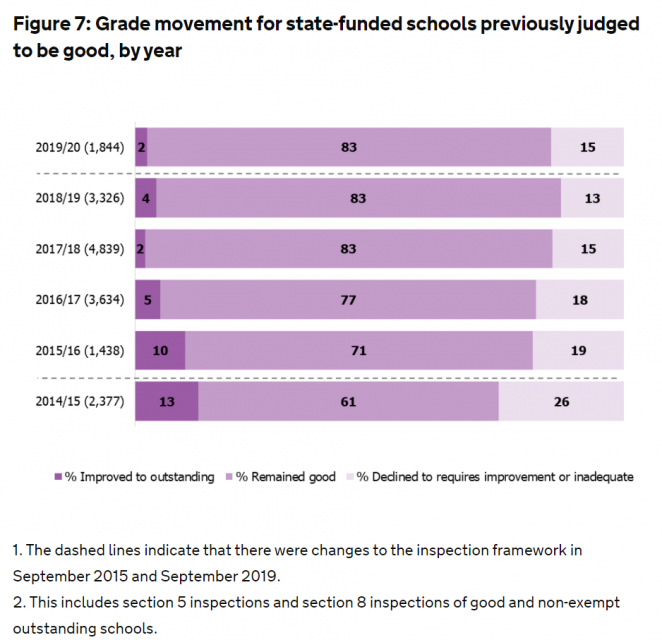 Secondary schools were more likely to decline to to RI or ‘inadequate’, at 24 per cent, compared to 14 per cent at primary.

Only 1 per cent of short inspections of ‘good’ schools converted to a full inspection. This happens only when “serious concerns” are raised.

Overall, 81 per cent of schools inspected last year either retained or improved on their previous overall grade.

Sixty-four per cent of all schools kept the same grade as at their previous inspection, compared with 65 per cent the previous year. 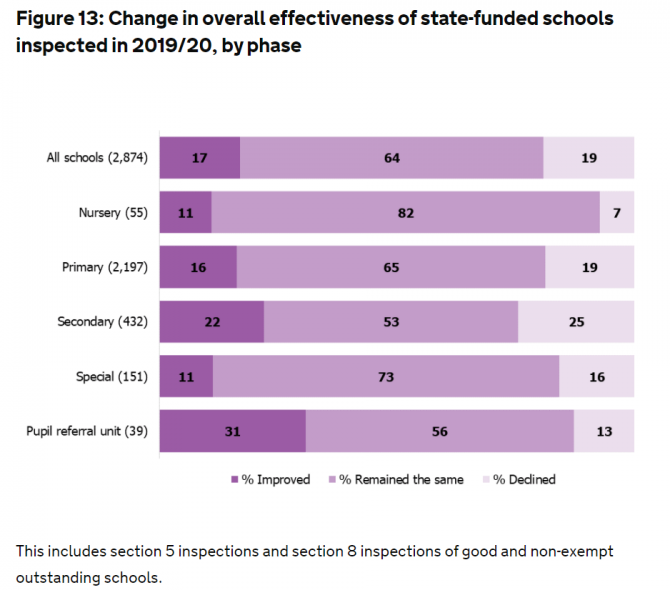 Overall, 17 per cent of all schools inspected last year improved.

But some types of school were more likely to improve. Thirty-one per cent of PRUs improved, as did 22 per cent of secondary schools.

6. 235 reports were published after inspections ceased

Of those whose inspection reports were published between April and August, six were ‘outstanding’, 113 were ‘good’, 75 were ‘requires improvement’ and 41 were ‘inadequate’.

As Schools Week reported earlier this year, schools that previously graded ‘requires improvement’ have been less likely to improve under the new framework.

This year, 56 per cent of those inspected improved to ‘good’ or ‘outstanding’, compared to 64 per cent last year. 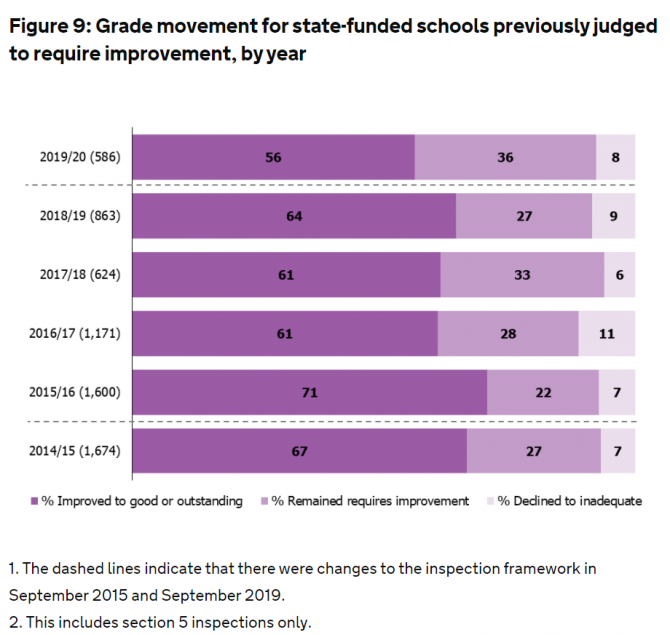 And a further 36 per cent remained ‘requires improvement’, which is an increase from 27 per cent last year.

RI primary schools were more likely to improve to ‘good’ or ‘outstanding’ than secondary schools, with 62 per cent improving this year compared with 42 per cent of secondary schools. But Ofsted said that has been the pattern across the last five years.