Standalone and small multi-academy trusts will wither away as mergers fuel the growth of larger trusts, according to leaked Department for Education documents seen by Schools Week.

The news comes as a Schools Week analysis suggests a merger was approved every five days over the past year. It lays bare the scale of growth in large MATs and the decline in standalone trusts in recent years.

All academies would be in MATs by 2027 if the pace of expansion seen last year were to be sustained, our analysis suggests.

Education leaders and experts say evidence that bigger means better is limited, and that many schools fear losing their autonomy in larger trusts.

Education secretary Gavin Williamson announced a new drive to get every school into a MAT in April. Regional schools commissioners have begun organising trust roundtables to push his vision.

One RSC presentation seen by Schools Week highlights an “expectation more SATs will transfer into MATs and more small MATs will amalgamate into larger MATs”. 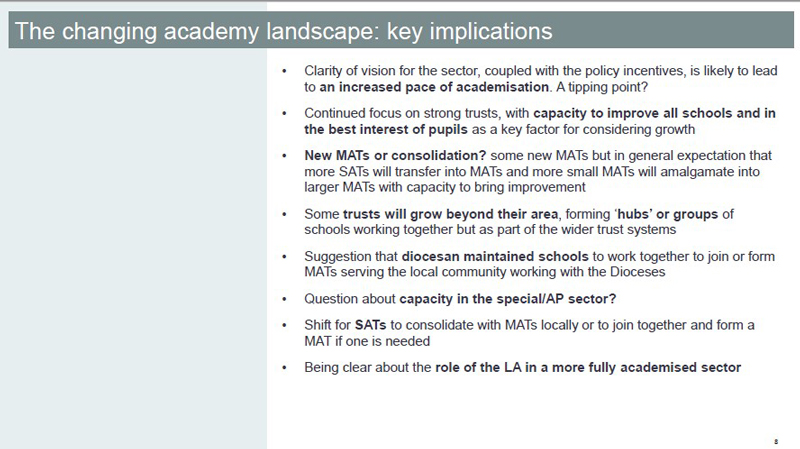 It says mergers are increasing, and a growing number involve trusts aligning their “ethos and processes as a partnership” rather than takeovers following DfE intervention. The presentation was sent to trust leaders this month.

“We are seeing a trend that tends towards some consolidation,” Leora Cruddas, chief executive of the Confederation of School Trusts, said.

Jeff Marshall, managing director of conversion advisers J&G Marshall, said he has been “inundated” with SATs, small MATs and maintained schools asking how to “stay on board with this national landscape”.

None wished to join large MATs, he said, while most fear becoming “carbon copies” of other schools, or an “afterthought” in a bigger organisation, and losing their autonomy and current leaders. 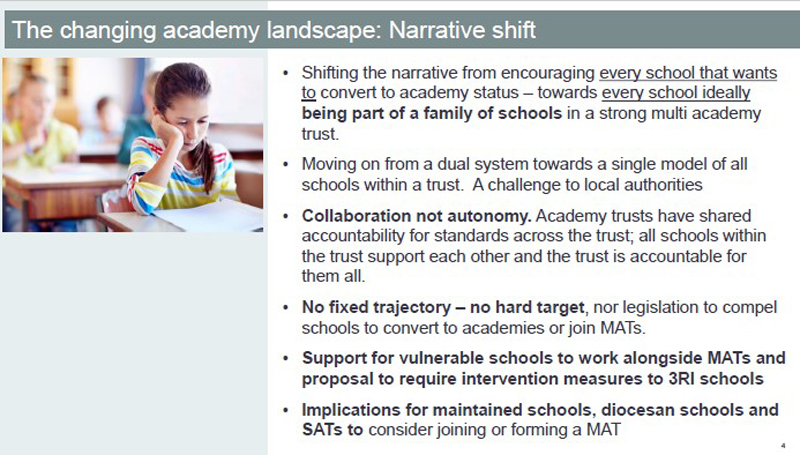 SATs disappear at an increasing rate

By contrast, academy and MAT numbers have kept rising. The number of schools within MATs has gone up even faster – suggesting they are absorbing SATs. 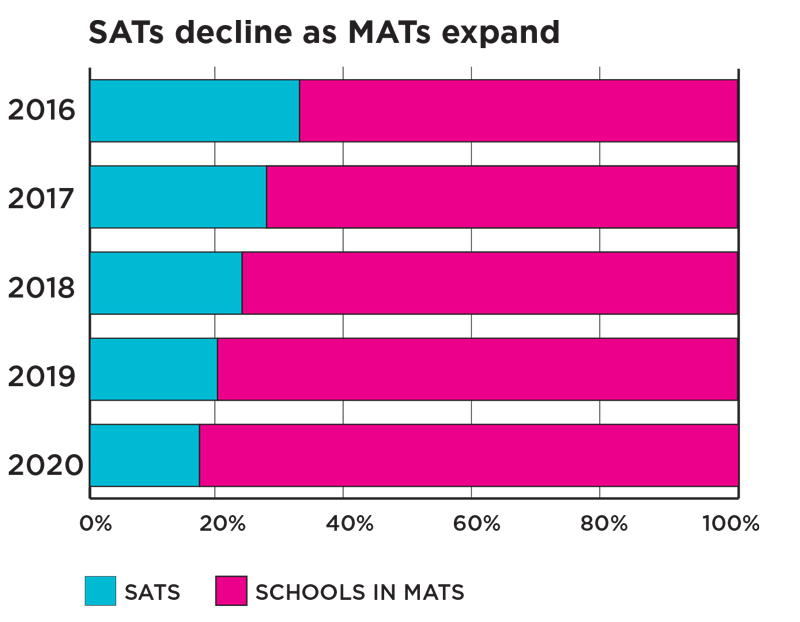 The Kreston data suggests 71 per cent of academies were in MATs in 2016, but DfE figures show that proportion now stands at 87 per cent. If expansion keeps outpacing conversions at the rate seen last year, all academies would be in MATs by 2027.

Analysis of RSC data provides more concrete evidence, with at least 71 mergers approved in the past year.

Almost two-thirds saw SATs fold into larger trusts, but small MATs have also faced a squeeze. Most of the remainder involved MATs with fewer than 10 schools each.

Some MAT-to-MAT mergers followed DfE pressure over financial or academic problems, but others reflected partnerships strengthened during the pandemic.

Separate DfE figures also show a 3.7 per cent decline in MATs with five or fewer schools in 2019, before Covid hit. It marks a stark contrast to the 22 per cent rise in trusts with between six and 40 schools.

Yet the academy sector’s overall growth has been slowing since 2016, sparking the latest drive.

Ashid Ali, principal of the standalone London Enterprise Academy, accused the DfE of trying to “force” a MAT merger after the RSC issued a termination warning notice last month. The RSC’s wide-ranging concerns included a “failure to adequately explore discussions with other MATs”.

Ali said the trust did not want a takeover, but had begun looking at “collaboration and partnership” options. “Sadly I’ve seen a number of schools transfer into bigger MATs, then get re-brokered as progress wasn’t fast enough,” he said.

But not all large trusts relish expansion. DfE data suggests the 55 MATs with 20 or more schools added 72 schools between them last year, but 23 of these trusts added none or even lost schools.

Knights noted that it was harder for large or dispersed trusts to understand communities. Marshall said they risked becoming like distant local authorities.

United Learning recently blamed the distance from other schools for giving up a Leeds academy.

Marshall also noted that it was easier for RSCs to deal with 15 CEOs with 300 schools than 300 SATs. “The minute we change schools to fit RSC templates is the minute we take something away from schools,” he added.

The DfE’s annual academy accounts admit to “no clear relationship” between size and Key Stage 2 progress. MAT Progress 8 scores are mainly below average, which officials attribute to high numbers of sponsored academies that were historically performing poorly before conversion.

A DfE spokesperson said MATs were “the best way to enable schools and teachers to deliver consistently good outcomes”, allowing strong leaders to support more schools and staff to focus on learning.

Schools Week understands that DfE officials are scoping out a white paper for later this year setting out their academy vision. They are now looking into whether they want more, smaller trusts, or to allow bigger trusts to get bigger.

Schools Week was told there was “some scepticism” within the department over larger MATs.